We were up just in time to catch Honey Hole this morning.. Old Bill looked like me, except it was his guide kicking his butt, rather than The Boss whopping mine… and they were on Palestine rather than Whitney.

I went down and got the paper.. It was C-O-L-D.. the dogs didn’t even want to do their job by going down and bringing the paper back to the house… they were cold and stiff legged… wanted to stay in their house. I think it was around 30° or 32°, and there was a little bit of a breeze, but clear.

We ate breakfast and checked the weather.. and at 11 it was supposed to be 50° or close to it and the wind was supposed to be in the 5 to 8 mph category. Hard to pass that up. So, we took our time, ate a good breakfast and read some of the bad news in the paper. By 10 we started loading up the boat… The poking around outside confirmed there was still a little bit of breeze… we bundled up in all our winter gear and headed on down to Whitney.

There were only four vehicles on the ramp this morning, and only 3 were pulling boat trailers. Those same 3 catfish guys who were there last time were on the ramp cleaning their first batch of fish. They said they had cleaned 30 and had some more to go. They were ready to make another trip out to run the jugs again. They were happy campers.. showed me some pictures of some big boys.

It was 11:30 a.m. when we dropped the boat in the water.. It was a very good thing that we were bundled up… The wind off the water was pretty cold. One bass boat was pulling out as we put in… They had nothing to say… maybe their lips were frozen…

The wind was about 7 or 8 and out of the north. The water temperature was 54° The water is still clear to slightly stained. And, I guess clear is a relative term.. in Whitney that means you can see your lure down 3 or 4 feet, maybe 5 to 6 feet in places. It was one of Willie’s “un-cloudy days”. Blue skies… I think the lake is staying about the same level, around 8 1/2 feet low. The State Water Data table show Whitney at 524.49, one, one hundredth off 8 1/2 feet down. Stable for several months now, and it is at a great level.. some good humps and ledges at this level. The ramp at McCown Valley remains in good shape and the sliding boat dock is also in good shape, though it now takes up one of the 3 ramp lanes.

We headed to the north shore to try to find some place somewhat protected from the wind. We fished a couple of our favorite spots… Hey, they weren’t in the stumps and shallow flat where we fished… I guess that only happens on TV when Bill has a guide. We fished some ledges and drop-offs by some creek bends and a couple of main lake points. By 1:15, we had nothing and were looking for a place to get out of the wind, maybe have a little lunch and rest some.

As we headed to the lunch spot, we came up on a point where we have caught a few fish in the past. I was fishing the old favorite, the Plum Zoom Old Monster and The Boss was pitching the Big Bite 5 inch black and green trick worms.. and an occasional Spro crank bait. I had two light taps and missed both fish.. right in the same spot.. coulda been the same fish. But, I finally connected.. This one was a few ounces less than 3 lbs. 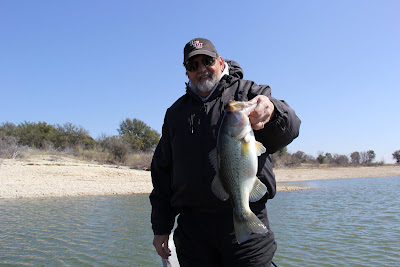 The Boss netted it up and took a couple of photos.. the wind had blown us back down the creek a ways. I trolled back up to the point and threw back in the same spot.. another tap, and another fish.. this one an ounce or two over 3 lbs. 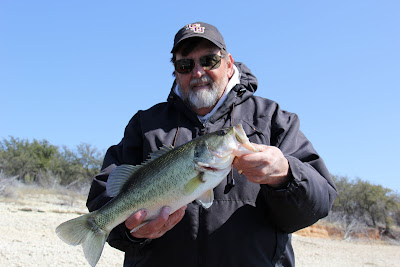 Same deal, circled back and another light tap… This time the fish was only a pound and a half. 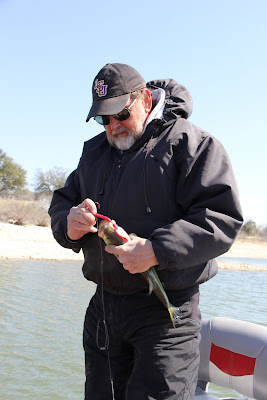 But, hey a fish is a fish. Did I mention The Boss was getting a little testy about “boat positioning”.. she seemed to think I was hogging the point. Well, I got hung up and we ended up trolling over “the spot” on the point. And we gave it up.. 3 fish, 7 1/2 pounds in about 10 minutes. We trolled on over to the “out of the wind” spot and ate lunch.

Then The Boss wanted to try some of the “end of the creek” shallow water.. and we did. She had lost a pretty good fish in there last time. But today.. it was nothing.. no bites. I proposed we head back to the productive point we had abandoned…

We weren’t there 3 minutes, before the infamous words… “I’m getting a bite”… which means.. hold the boat right where it is.. even if the wind is 50 mph… She set the hook and boated this 4.1 pound fish.. She picked it up about 10 feet from where I had caught my three. 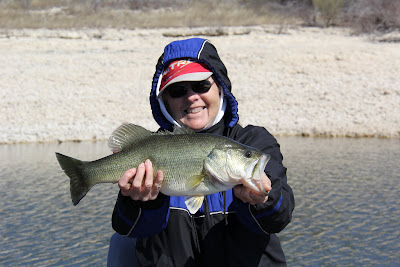 I might have forgotten to mention that she had changed from the Big Bite to the Zoom… I am a really good guide… put her on the spot and gave her the lure (Actually she had already re-rigged during lunch)… I also told her to use the “Joe shake” trick..that is what I had been using to get my bites. Our son has a way of “shaking” a T-rig that he has taught us.. it works. I did manage to troll away before she could put two more in the boat.

The wind never died much and we didn’t come out of our cold weather gear. We fished a few more spots but never had another bite. All the fish we caught were right in the same area.. Three of them were out of the same exact spot… a ledge in about 6 to 8 feet of water dropping off to 18 to 20 feet in the creek…

Even though it was cold, it was still a good day.. We fished for 4 hours and caught 4 fish.. Good stuff. Safe trip down and back.. no issues or problems.. very good stuff. We did note that the ramp had gotten a little busier as the day went on… I think there were 6 to 8 rigs on the ramp when we left… and those catfish guys were out making another run.