Well… it was a long day Saturday….

We woke up late… I looked at the clock and it was 6:58 a.m. We had missed Honey Hole. Dang the luck. I woke The Boss and told her we were going to the Elks Diner for Breakfast. I wanted to hear the latest fishing gossip from Gene who works at the BP Boat Outlet in Fort Worth… He is always the guy “in the know”. So, we jumped into our clothes and headed up there… Unfortunately, Gene was coming out as we were going in. But, he did stop long enough to visit for a minute. He said that he and a buddy had fished Whitney last week and caught a near 5 and several 3’s on there day out there. They had started right by the ramp at McCown Valley and went up the lake along the bluff walls. He also advised he was fishing a tournament on Lake Palestine on Sunday… was a bit worried about the high wind forecast; winds are supposed to get up to 25 or 30 with big gusts…

But, his comments on the “catching” on Whitney really gave me the itch. As we worked through breakfast there, we could tell it was going to be a nice day. The TV weather said the winds were going to be down, and it was supposed to warm to the 50s (It was in the high 30s when we got up, too cold for us old folks.. certainly, a few years ago, it would not have bothered us. Now it is a different story. By the time we got to the truck, we knew we were lake bound.

We got to the ramp at McCown about 9:45 or so. The parking lot was full and there was even “overflow” rigs parked on the grass. We were late. Normally, I do not like to fish on days when there are big tournaments… Usually lots of boat riding, wave making and such which doesn’t work for our main lake point fishing. But, we were there so on we went. As I backed the boat in, I noted that there was plenty of “tournament gear” near the ramp. The sign out by the trailer said it was the South 40 Trail (www.facebook.com/South40Trail).

It was a pleasant day other than being a bit chilly. We didn’t wear gloves, but we didn’t shed our snow suits either. The wind was from the Northwest so we headed across the lake to the Bee Bluff area where we could fish out of the wind. 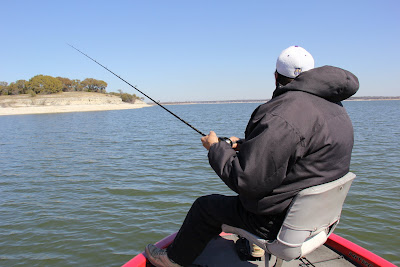 Surprisingly, there were not a lot of the tournament boats in the area nor were there many racing to new locations. But the ride across the lake might have shed some light (or wind) on the reason for the light boat activity… IT WAS COLD at 50 mph, can’t imagine how it was at the speed the tourney guys go. The ride across the lake also confirmed what we suspected the last time we were out… the battery gauge indicated that it was discharging rather than being charged… that is for some reason the alternator was not putting out… maybe a loose wire, who knows… but will have to have it checked out.

We just spent our time fishing in one area and used the trolling motor to get around. We were able to establish that there either were few fish where we were fishing or that they were not biting while we were there.. We wore the area out. There were a couple of tourney boats that visited the Bee Cover area, but it wasn’t the usual grand central station that it becomes on a hot tournament day. We figured it must have been one of two things… either it was too cold for those guys to be boat riding or they were sitting on fish and weren’t moving. The way we have found fish lately was for them to be bunched up in one place… I think that was the case yesterday for those guys who found them.

Anyway, we fished for 4 hours and then hooked ’em to the ramp to beat the weigh-in. A good thing too because the ramp was b-u-s-y from 2:30 until 4:00. We had 3 bites the entire time we were on the lake… no fish.

Something else we confirmed yesterday is that it is a very reasonable thing that we don’t fish tournaments because we can’t fish more than 4 hours without tiring out, we don’t like bad weather and will not fish in it… and most importantly… we don’t catch fish like the guys who know what they are doing.

After we got the boat on the trailer, we decided to stay for the weigh-in. Here are some photos from that.. there are 85 or so photos… and there is a a bar at the bottom of the pictures where you can slow it down and control it yourself if you like.

I didn’t get the official results… but here is some of the stuff I learned….

The South 40 Trail is sponsored by Farm Bureau Insurance and yesterday’s big bass prize was sponsored by Talbert Construction. There were in excess of 40 boats in the tournament and it had a 5 fish limit per boat. Most boats had the limit of 5 fish. And, a lot of folks thought they had a shot at big bass. There were a number of fish over 5 lbs brought in. But, as they called them off at the weigh-in, it was consistently… “Team so-and-so, Five Fish, Five Alive”. Two fellas even came in with 10 fish, but despite a disgruntled look, the Tournament Committee only let them weigh in 5 fish.

About mid-way through the weigh-in, the Team of Gilbert & Gilbert took the lead… a little over 17 lbs and a 7 1/4 pound big bass… lots of smiles there for the Gilberts… Not so many smiles for all those other guys (and there were quite a few that had fish of 5 lbs and over. And, there were a number of teams bunched up right around 16 lbs… tenths and hundreds of a pound were creating grins and much gnashing of the teeth. I heard one guy tell his partner, “Well, there goes the gas money” as another 16 pound bag was weighed in.

There were some late reporting teams… with some big bags.. Several teams had two guys carrying up the sacks of fish… it was a nail biter right down to the finish… but with two or three teams left to report, the Tournament Committee was taking the Gilbert’s off to the trailer…. Ah, but what a finish… One of those last two teams came in with a sack that weighed 17.71 pounds… that’s 17 3/4 pounds for those like me that had a hard time with the math stuff. They didn’t have big bass, I think their largest was a 6 something…. but, they had the sack weight.

I hope you watch the slide show (and enjoy it). Guess who the Gilbert’s are and see if you can see the winners…

We didn’t stay for the final results. We wanted to be out of there before the mass exodus of all those bass rigs. For exact results, visit the South 40 Trail Facebook page… their results may be very different than what we thought we heard and saw.

Say, what do you think about the bass fishermen helping to try and solve the gloomy economic outlook in this country… get a load of those boats, pickups and gear… Study those boat pictures. Those rods, reels and fish-finders are not the inexpensive variety…. Those boys are doing their best to help turn the country’s finances around… Just ask Academy, Bass Pro Shop, Cabela’s and Gander Mountain. Boat dealers and truck dealers love bass fishermen. And, by the way… have you bought gasoline lately? As we rode down to the lake, we noted $3.59 a gallon gasoline…. And, if you look at our history the past month or so, keeping the pickup, trailer and boat operating is not a cheap deal either. But, bass-fishermen are some of the most optimistic folks you will meet (ever notice how one boat will follow another and fish in the same spot the previous one vacated?). They always believe they can win and they never quit.

But… for us the bottom line is Clint Eastwood’s old line in one of his Dirty Harry movies, “A man has to know his limitations.” This tournament is a prime example of why The Boss and I don’t fish tournaments…. It would be easier for us just to send in a check than to fish. I would imagine there were near 200 fish caught yesterday on Whitney and they were not small stringers. We had none,zip, zero, nadda.

Corp of Engineers Closes Parks and Boat Ramps at Whitney, Aquilla and elswhere