We were making a run to Hillsboro today so we decided to run by Lake Aqulla and check it out since we hadn’t been down there in a while. I have heard some reports lately about the lake and the great fishing down there right now. B-U-T, I knew the lake was down and there has been NO rain to speak of. So, I wanted to see it for myself.

We started on the west side coming across the dam. Here are some of the photos I took.

This is the flat on the west side of the lake.. nearly dry… I have seen it worse, but it has been quite a while. 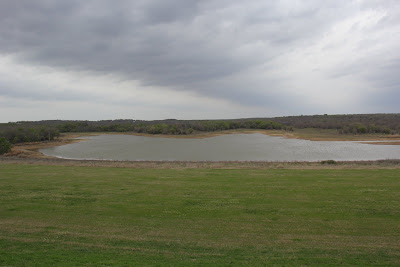 This is still the flat, just taken from near the mouth of the channel leading into the flat. 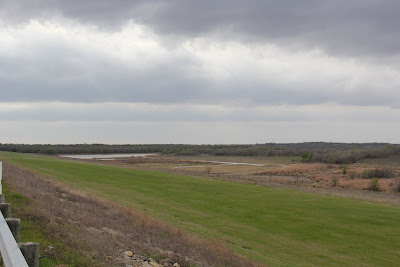 This is taken from the same spot, at the mouth of the channel going into the flat, looking up toward Snake Island. That is the hump out in front of the island. 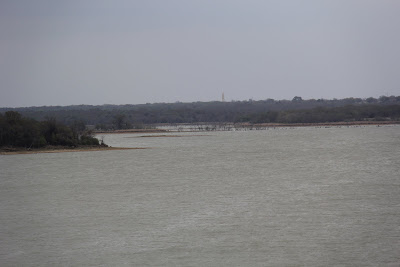 Those stumps we used to try to dodge to the east of the island now look like trees, and they are.

This is a shot of the pumping station at the dam. Lots of bare bank there. 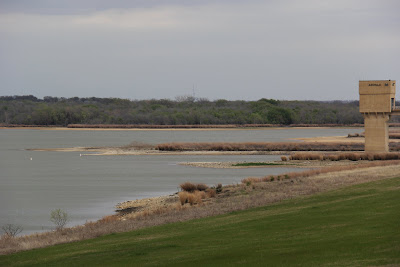 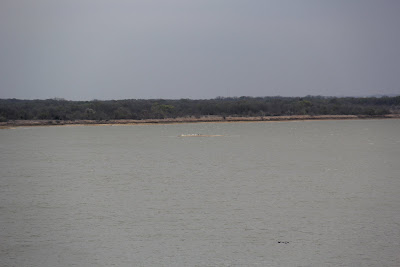 This is the bridge taken from the ramp at Dairy Hill. 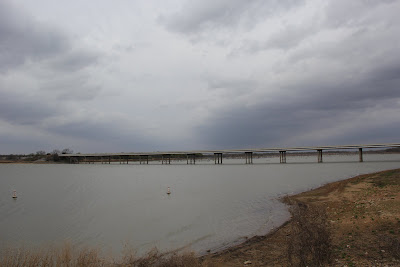 And, the ramp at Dairy Hill.

And, the boat dock at the Dairy Hill ramp. 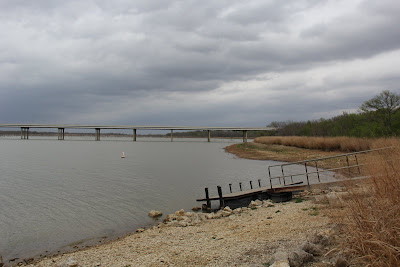 This is a couple of new best friends, Clyde Swan and Johnny Williams. 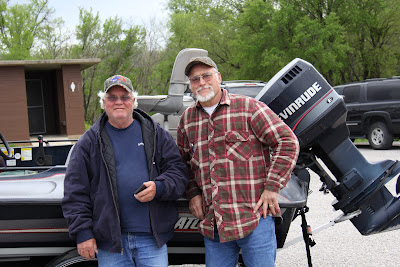 I just met them today as they were coming off the lake. What a report they had. They had been fishing since 8:30 or 9 a.m. this morning. They allowed that they had a spectacular day. Johnny said he had caught one that was 5 1/2 pounds or so, and they they caught a bunch of 3s and 4s. But, he said that Clyde didn’t suggest that they take pictures until he (being Clyde) caught one that went about 6 pounds or better. Clyde whipped out his cell phone and showed me the picture of that one. They said that they probably caught 10 keepers (18 inches to be a keeper on Aquilla) and a bunch of smaller fish that they didn’t even count. Johnny said it was the best day he had had in a while. He said the wind was rough all day and that they had got good and wet coming back across the lake, that it was a rough ride. Aquilla is where The Boss and I go if we are desperate to fish when it is windy. But today, the big white caps were obvious, especially on the east fork. Anyway, Johnny and Clyde said that they had to hunt places to fish today that were out of the wind. But, they found plenty of fish even though they couldn’t fish where they wanted. They said the fish were in the shallows and spawning or getting ready to. They said the big ones were full of eggs. They didn’t keep any of the fish, but they had some photos. Clyde is supposed to email me the picture he showed me of his 6 pounder. They said the water temperature was 61° and clear (as much as Aquilla gets clear). They showed me the lures they caught their fish on.. A fluke and chatter baits. They said the bass were really liking the chatter bait.

So, there you have a great fishing report. Johnny said the fish were shallow and biting… if you want to get in on the action, now is the time. I can tell you that I have lost 4 or 5 of the biggest fish I ever hung in Aquilla. I think if you are looking for that 10 plus fish, Aquilla is the place to be. I did ask Johnny if he fished above the bridge any.. he said, “No, those fish up there just took his spinner baits.”…

They said the ramp there at Dairy Hill was still in great shape. They also said that the Old School ramp was still in working condition too and that there were three or four rigs on that ramp.

Johnny said he didn’t mind my sharing their fishing report with the folks that read my web site… He just didn’t want to see his picture up at the Post Office…. and he did say I could pass along that he and Clyde were available for any women folks who might be interested in a fishing trip.. no just kidding… well maybe.