Winds were down today and The Boss and I headed to the lake. I had had a couple of great reports over the weekend about folks catching lots of bass… we were fired up and ready… but not so ready that we went early. We didn’t hit the lake until 11 a.m. It was 31° when I got up this morning… too cold for us folks that fish for fun. We decided to let the sun get up and warm things up a bit before we got on the water. 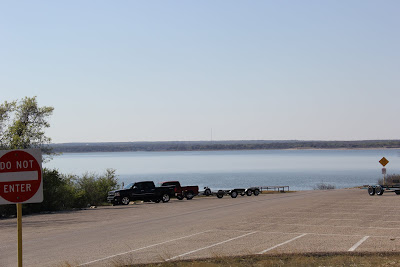 By 11 a.m. It was about 47° outside and the wind was around 2 to 3 mph. It was another Wilie Nelson day.. “An Un-cloudy Day.” The lake level is 524.13 or 8 feet 10 1/2 inches. Water in the main lake where we fished was unusually clear… but back up in some of the creeks we fished, it was more stained. The ramp at McCown continues to be in pretty good shape. There is a lot of gravel on the ramp at the waters edge and the best launch lane is the middle lane. There are only two working lanes, the west side lane is taken up by the boat dock. There were 4 rigs already on the ramp when we got there.

We fished the Bee Bluff area, but fish were hard to come by. We didn’t find any concentration of fish. We just picked up one here and there. Bites were far and few between. We fished some crank baits, but mostly The Boss fished a T-Rig and I fished a C-Rig.

I caught 3 bass and a striper. The Boss caught one bass. We didn’t weigh the bass, they were small, maybe one might have went 2 1/2. The striper weighed 6 3/4 pounds. 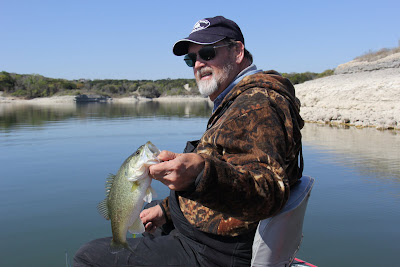 I got a new armadilla hat. They had them at the Perrin Bluegrass Festival last Satuday. 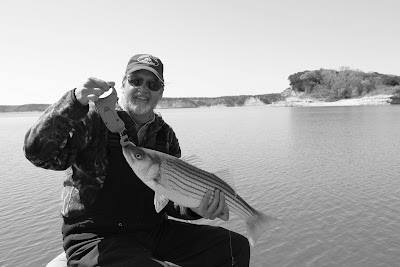 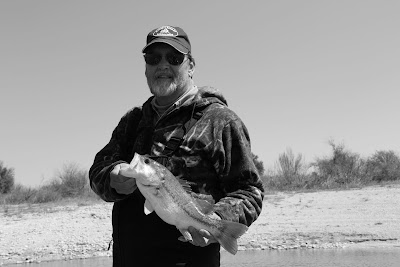 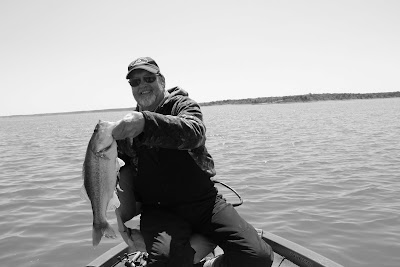 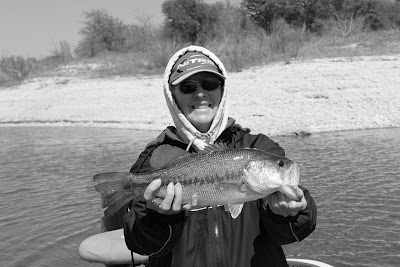 I don’t know, maybe The Boss had a 3 pounder.. well maybe.

There were still 5 rigs on the ramp when we left and the weather was great.. about 60°.

All in all, it was a nice day on the lake. We fished leisurely listened to Rush Limbaugh, then ate lunch. We had the lake pretty much to ourselves. We only saw two other boats. I guess those other folks who launched from McCown were elsewhere on the lake and catching fish.