I have had two reports on Whitney today….

First thing this morning in church Keith Jones, “the lureguy”, had to tell me about the “big one” they lost on Whitney yesterday. He and his partner also fished Saturday before last (two Saturdays ago) when they caught 10 fish… I think I gave you that update previously. Yesterday afternoon, they boated 5. I think he said they had one 5 and one 3 and the rest smaller. But, he wanted to tell the tale of “the one that got away.” Keith related that both he and his partner have caught ten pound plus fish in the past.. so they know what one looks like. He said this one jumped 3 times and that his partner got it to the boat and then his partner’s son managed to miss it with the net, several times. The fish broke off. He said to tell everyone that “if they catch a bigun with a hook with a weed guard in its mouth in the Bee Bluff area, its theirs. Call them and let them know so they can come get it.” Keith felt the fish was in excess of 10 pounds. He hung this one on a trick worm. He lost another on a crank bait on a light rig. He said that his partner never put any pressure on the fish and that it never jumped, but pulled off after an extended fight. Keith was set to go back to Whitney this afternoon, wind or no wind, cold or no cold. I can’t ever remember Keith being this excited about a fish.

Keith also related a “boat” story… Yesterday, they had launched at Cedar Creek Park (and he said the ramp was in great shape there) and fished south to King Creek, where he likes to fish. In King Creek, they hit a stump and the prop when into “free-spin-mode” and they were stranded some 6 1/2 miles from the Cedar Creek ramp. They were able to find some old boys fishing from the bank and Keith talked one of them into running him by pickup back around to Cedar Creek so he could get their rig. They were able to get the boat out using the “phantom” ramp in the back of King Creek (never been there myself). I don’t know what their plan is, but I am sure they will be back out on Whitney if they have to float in a wash tub.

And this from one of my buddies over on TFF….

Hello Armadilla, fishing on Whitney has been incredible the last 3 weeks for me. Tuesday and Wednesday I caught over 50 keepers both days. Plus I caught a 3 1/2 smallie, The first I’ve caught on Whitney in 10 years…get out there and get you some. A lot of fish 4 to 9 pounds….Rick

Well, I can tell you that The Boss is itching to go… B-U-T, we are going to at least wait for the wind to come down some.. We are just too old to get out there in that rough water. First chance though, we are going to be there. Our thanks to Keith and Rick for their updates.. and also to Justin who also has been sending us stuff. I really appreciate this… But, folks.. to make this really believable… I need P-I-C-T-U-R-E-S

For example… I got an email from my buddy, Scott Crews, in Montgomery, Alabama just now… along with a phone call telling me to check my email…. He sent the following pictures which include a 40 lb stripper and a 7 lb spotted bass. All these fish were caught on an Alabama Rig this morning at the foot of the Bouldin Dam on the Alabama River. The lake above the dam is Lake Jordan. Scott said his 40 lb fish came on his 3rd cast with the Alabama rig.. that they caught more than 20 black bass. He said he quit counting fish at 25. They caught fish until he gave out…

Anyway… here is his proof…. BTW.. The Boss is in the other room making airline reservations… 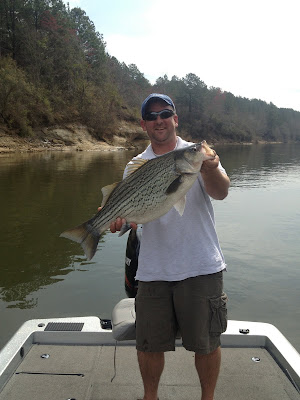 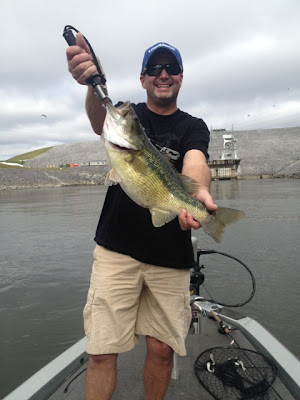 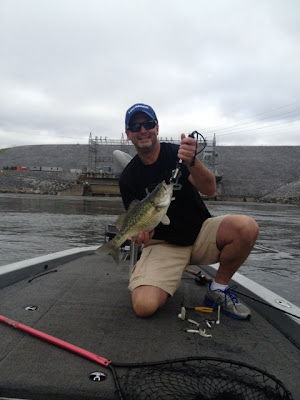 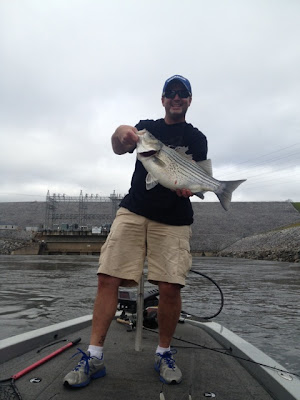 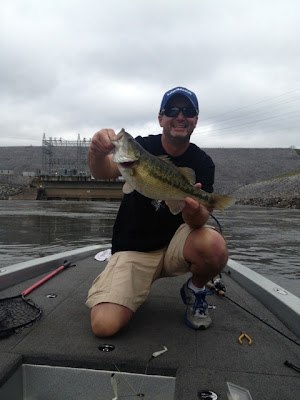 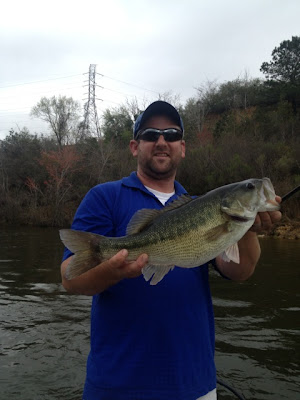 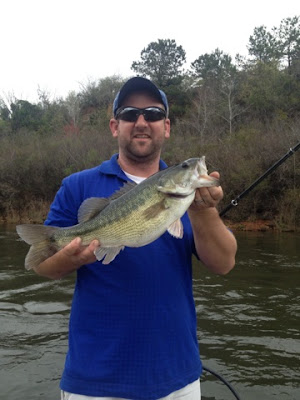 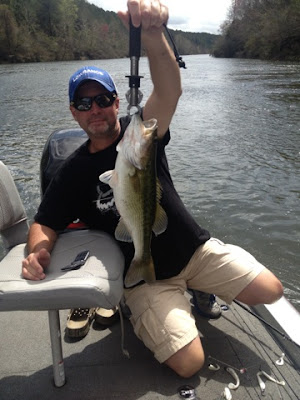 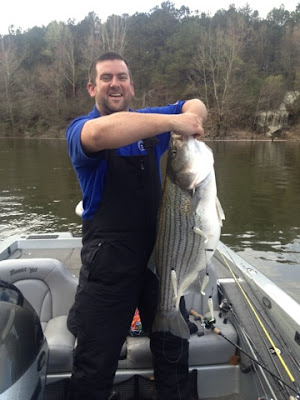 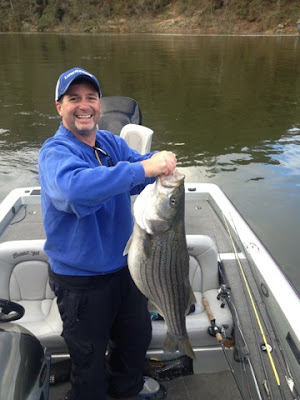 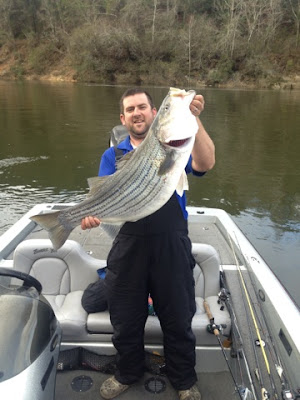 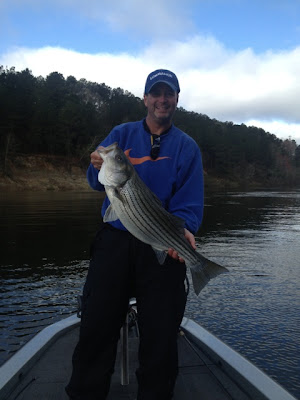 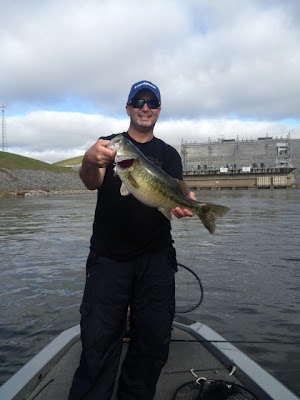 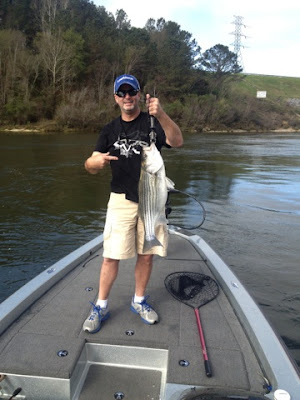 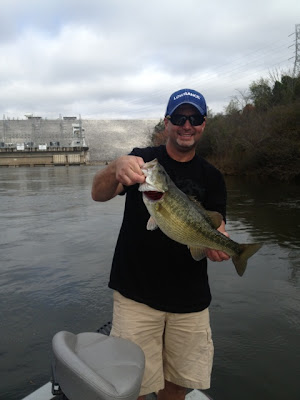 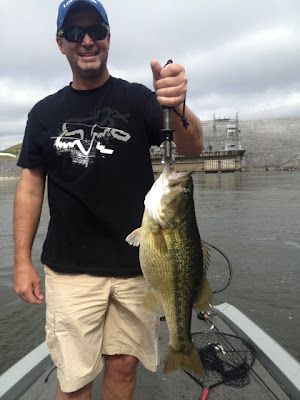 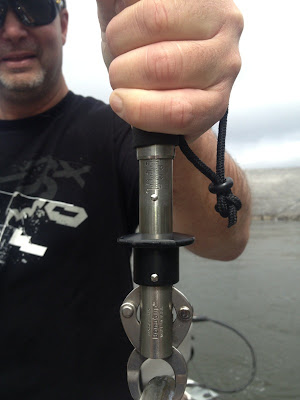 Scott said they released all the fish….

Now that will just make you want to walk to Alabama if you had too… of course a couple of years back, I was sending Scott my bass pictures from Whitney and he drove out here to fish in March….

How many Alabama rigs do you own? Scott said he is going to have to buy a new one that he lost to of the 5 wires on his…. any wonder?