We had “stuff” to do yesterday, but when we got up and it was absolutely calm outside, the sun shining and about 60°, The Boss said… “We should go fishing!”..

We scrapped our “commitments and hooked up the boat… We didn’t get away from the house until 7:30, but what the heck… a day on the lake when it is a great spring day like yesterday… Well, we aren’t getting any younger.

We were on the water at 8:30 a.m. The water temperature was just about 65°. The sky was bright blue… not a cloud anywhere. The air temperature was about 60° when we started and about 80° when we came off the water. The lake looked like a mirror… There was no wind early, but it got up some around noon. The lake level yesterday was 523.89 or a little over 9 feet 1 1/4 inches low. The ramp at McCown is great. While the main lake seemed a bit stained, we found water back in Cedron Creek and Camp Creek that a person could see 4 or 5 feet deep along the shore and on some humps and points. It was really interesting to see fish lying parallel to the rocky shore.. and, there were lots of them. Most were carp and gar, but others could have been bass, especially those that were deeper. What we got to see is how fish in Whitney relate to the rocky shore line. They were hugging any rock and it was interesting that they were stationary and parallel to the shore iine..

The old Nitro screamed across the lake like it was on greased ice… what a smooth ride. We headed back to Cedron Creek… I guess we should have put in at Cedron Creek Park, I just didn’t think about it.

We caught two nice whites on crank baits right off… but no more. We tossed those back because we had so much fish from yesterday and I wasn’t about to clean another mess of fish. Enough with the whites. We fished the area hard. And we noticed a couple or three other boats also working the lake. One of them sat on our favorite stumpy flat for over 2 hours…. then another one hit it… Hope they found some fish on it.. we didn’t get any there yesterday… other than one nice white.

We fished almost all the same locations we fished yesterday, but we just didn’t come up with any bass… We also didn’t get many bites. The Boss said that she believed the clouds we had yesterday had helped keep the shad up and working. We did see a few yesterday, but nothing like we had on Monday. The scenery was still nice… Here is a shot of some of the primitive park area back along Cedron Creek. 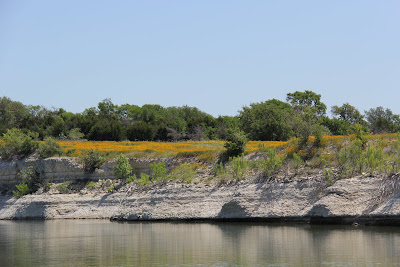 It looks great, but I wouldn’t be one for wading around out there in those flowers… think s-n-a-k-e-s!!!!!!!!!!! I much prefer viewing the lake from the boat.

Since we didn’t do any good in Cedron Creek and the wind came up a bit, we decided to take the old guys advice and fish the shore line north of McCown…. You can see in the picture that a couple of other folks were fishing that area as well. I don’t know how well they did, but we zeroed on the bass… I did pick up this monster on a C-Rig…. 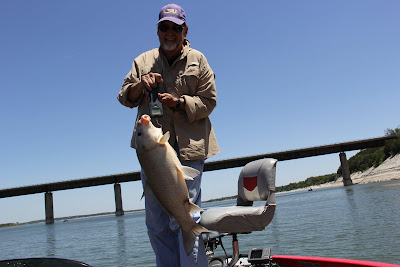 Here is a close up of the scale… I was disappointed that the fish wasn’t as big as the one The Boss caught a week or so ago. This one was only 13.4 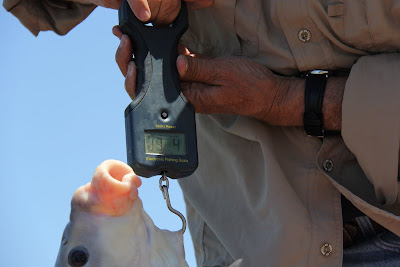 I am starting to think that carp like plastics almost as much as bass do.

We left the lake around 1:30 and headed for the house… I was thankful that we had no fish to clean when we got home.

After a nap and some more relaxation, we headed out to a blue grass jam over in Midlothian. Here is The Boss hard at work on the guitar.. she is as focused on it as she is on her worm fishing. 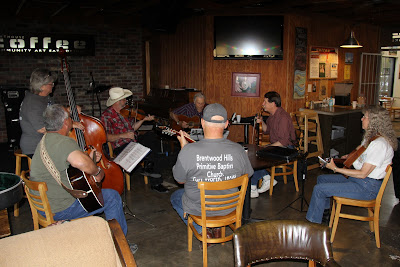 If you like bluegrass, check out our bluegrass web site: www.texasbluegrass.net We have as much fun with the bluegrass stuff as we do fishing… well, almost.

We had a full day…. and it was fun. Retirement ain’t half bad.