The West Bass Club did an outstanding job today.  What a tournament finale!!!  A great show at the weigh in, great food, great folks, and a huge auction and raffle… not to mention lots of fishing stories and associated harassment.  Jeff Gilbert of Fun N Sun Boats helped emcee the weigh-in and did a great job with it.  We heard that the folks had a great time the night before as well… some were barely moving Sunday.  The West Bass Club members did the heavy lifting setting up the tents for food and drink, the silent auction, and the weigh-in photos as well as managing a large friendly crowd of several hundred people, pickup trucks and bass boats.  The Harbor Master Marina folks are some of the nicest folks you will meet and they make a great tournament host…  a great view of the lake and a very nice marina. Admission to the weigh-in for spectators was F-R-E-E, which didn’t hurt our feelings.  Even if you didn’t fish, the show, visiting and all was a good time.  Harbor Master Marina has one of the best views of Whitney on the lake.

On the way down from Cleburne, we met about a dozen or so bass rigs headed back from the lake…  Don’t know if they were coming back from the Bohemian or the Media Bass Tournaments(the Media Tournament was held on Whitney on Sunday as well), but anyway those guys had apparently given up the ghost at about 11:30 to 12:00.  We were beginning to think there might not be many folks at the weigh-in…. W-R-O-N-G again catfish!

You probably haven’t heard, but the folks down in West, Texas can cook some of the best stuff around.  And they did.. and the food and drink was all free, provided courtesy of the West Bass Club.    They did an outstanding job.  Here is a slide show of the warm-up to the real thing…

First off, we will give you the highlights of the tournament… Here are the Top 40 winners in weight.  There was a 3 fish limit, (though the question was asked numerous times “Didn’t you know this was a 3 fish limit?)

ALL RESULTS ARE UNOFFICIAL!  WE DID NOT STAY FOR THE FINAL RESULTS FOLLOWING LIE DECTOR TESTS AND SUCH!  Also, we have done the best we could with names, weights and photos… If we made a mistake, we are sorry… let us know and we will try to correct it.  For official results, please visit the West Bass Club web site at www.westbassclub.com 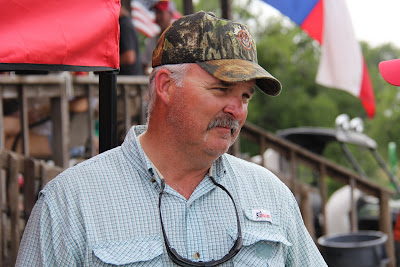 And here are the folks with the Big Fish.. those weighing more than 6 pounds.

This is Jordan with his 8 pounder… 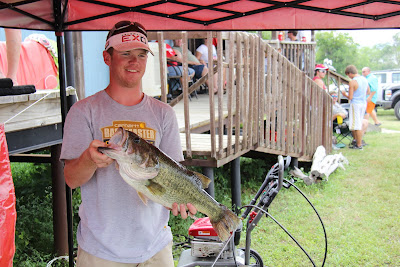 Ladies – There were a total of 16 women who fished in the tough wind conditions… they are much tougher than I am.  I wouldn’t even put my boat in the lake under the wind conditions that were out there today.

Here is Misty with her 6 pounder… 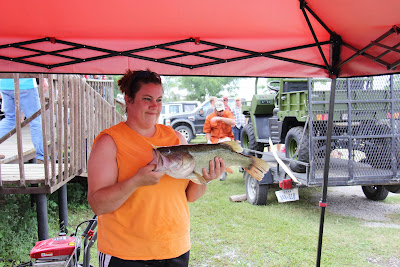 And, there were some “Juniors” out there too…  Six Juniors in fact.  Jeff Morse won the Juniors Group with 2 fish weighing 5.23 pounds and he had big bass for the group with 3.72 pounds.  Jeff finished 66th over all.  An outstanding job for a “junior.” 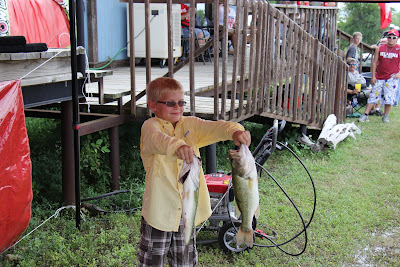 And here are a few statistics for you…  we took these from the tournament results sheets that the West Bass Club officials gave us….

There were 251 contestants / entrants.  This is about twice the participation of last year’s tournament!  Great turn out!

Sixteen contestants  were women.  Boys, the top Lady finisher placed 55th overall. That means she beat 176 of you Big Boys….   and she just missed the 6 pound club…. actually finishing in a tie for 7th for Big Bass overall.  Whoooo Boy!!!

There were 14 fish over 5 pounds weighed in.  All but one of those folks finished in the top 26 of the field.

Of the folks finishing in the top 20, only 2 entrants did not have the limit of 3 fish.  This confirms, it you don’t have a limit including a kicker fish, you are don’t have much chance to be in the running.

Some things we overheard at the weigh in…..

“Didn’t they tell you it is a THREE fish imit!”

I can tell you this….  I have a lot of respect for folks who fish tournaments.  First off, they are the real thing… they know how to catch fish.  Second, they are tough, not much deters them from getting out there as was the case Sunday.   The winds were terrible… I could hardly keep my hat on my head at the weigh-in… white caps were clearly visible on the main lake.  Those are just not conditions old folks like The Boss and I are willing to fight.  Winds in excess of 20 mph are really tough on Whitney, especially in the McCwn Valley area..  We are “fair-weather” fishermen….  I salute those who have the strength, stamina, and will to go out there and fish tournaments in the toughest of conditions.  Those are the real fishermen.

One aspect of this year’s Bohemian was the fund raising for the victims of the West, Texas explosion.  West Bass Club members and Jeff Gilbert of Fun N Sun boats did a great job of promoting the silent auction, the raffle and the live auction.  We believe lots of folks opened their wallets to help out… and, there were lots of great items contributed by folks.

The Boss noted one young man who “worked like crazy” helping to set up things and during the weigh-in. She notice he was taking orders and getting things done without a word of complaint.  She said she didn’t hear anyone say “thanks” to him, but she felt he deserved a special “THANK YOU”.   Here is his photo while he was helping weigh the fish. 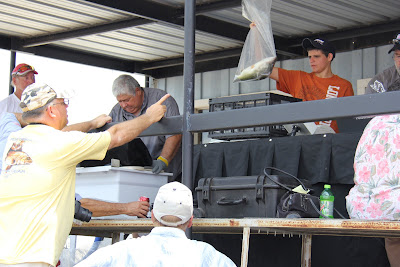 He is the young man in the orange shirt.  We noted that he was first in line at the weigh-in.

All in all, it appeared to be a “safe” tournament.  We did not hear of any major boating mishaps, even with all the rough water.  We also saw lots of folks enjoying themselves and in the mood to help others.  What a great event.  Great job West Bass Club!

As a footnote. the I-35 Division of Media Bass also held a tournament on Whitney on Sunday. Here is the link to their web site and the results of that tournament. http://www.mediabass.com/2k13/TX/I35/5.shtml