We finally had a great weather day and a great fishing day! The winds were down, the temperature great, perfect weather…

We were up early this morning.. 5:00 a.m. and cooking breakfast. We love those sausage biscuits and hot coffee on the ride to the lake. A quick check of the weather confirmed that the weather-guessers were close to correct the night before. Winds were “light”, the temperature was about 50° and it was supposed to warm to the high 70’s today. The skies were supposed to be partly cloudy and then clearing. Actually, it was sort of the reverse.. clear early then it clouded up.

The water temperature was 64°, and seemed slightly stained today. The McCown ramp and the Cedron Creek ramps remain in good shape.

The winds have been out of the north lately and we haven’t had much chance to fish Cedron Creek like we would have liked. But today was one of those days where we could fish any where we wanted.

We started out at 7 a.m. on a creek bluff and a point that we really like to fish. I was determined to use up a square-billed crank bait that my buddy had recommended. He and others had said they had been catching bass on them. The Boss was working a smaller crank bait and a T-Rig. As we started down the bluff, there wasn’t much activity at first… or at least the first 15 minutes or so.. then we spotted some small shad working right along the shore line on the point… I cast up ahead… keeping The Boss well away from them and the lure got hammered. It was a huge white bass, better than a pound.. maybe close to two… we didn’t weigh it but decided to keep it. Then they started coming one after the other. We only kept the big ones. We ended up with 14 very nice whites in the boat. The Boss had switched to a Rattle Trap as the big fish seemed to be hitting my larger square-bill and she also wanted a lure that she could cast a long ways. We only took one picture and the action (for us) only lasted about 30 to 45 minutes. We were worn out by 8 a.m. All that casting and cranking.. and those big old whites were just hammering the lures. Sometimes we would think we had a striper, but there were no stripers.

We didn’t stop to take many pictures… in fact I only took one of The Boss with one of her big whites. 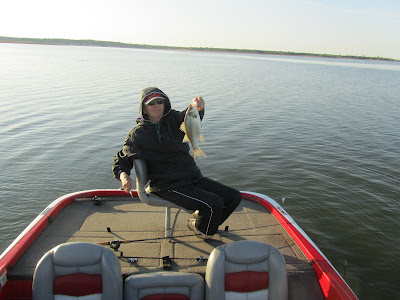 When the fish are that active, there is no getting The Boss to stop and take pictures.

I did pull out my broken Rebel and did manage to catch one bass with it in amongst the white bass.

We pulled up and went to another point with some wood on it. I picked up one more white on it, but no bass. Not on top-water or worms.. or the crank baits. We spent a good hour poking around that point….. all in vain. It was beginning to look kind of stupid to have left all that good white bass action to go and look for some black bass. But hey, we were tired of the whites. Where were those crank bait eating black bass?

We left there and ran up to Bee Bluffs. We spent another hour searching for fish up there. We found one. We had had good luck Sunday afternoon there, picking up 3 nice fish.. but we were able to only find one today.. but it was a nice fish.. a 3.4 pound bass. 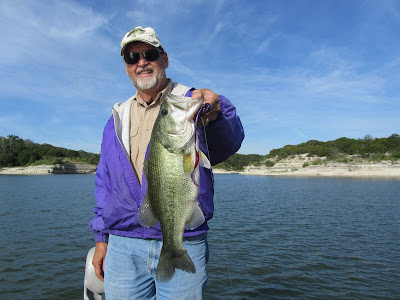 Finally we gave up on Bee Bluffs, even after we wore out a spot where we watched a fella sit on it yesterday, apparently catching some fish.. but we didn’t find any.. Not with crank baits or T-rigs.. or nothing else. We headed back to Cedron Creek where we found the shad working the shore line… We could see some fish hitting in them. We caught 3 more bass… actually I thought we caught more than that, but 4 total was all there was in the live well when we got home. We caught the last 3 on top water lures.. The Boss caught two on a walking lure and I caught one on a broken Rebel… I think I must have had another one and let it get off at the boat… at the time it seemed like we had ten fish.. they came quickly right off one point… But, the shad were working everywhere. 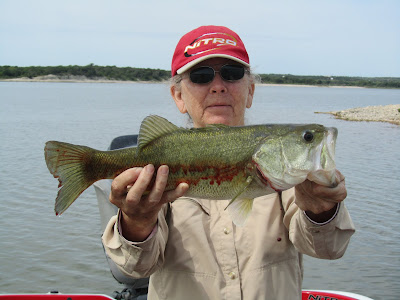 That fish swallowed a walking top water.. It was chowing down.

When we got back to the ramp, another fella was loading up as well. He said that he only had two fish today and that the biggest was about 2 1/2 pounds. But he said that on Friday he had just killed them. I don’t recall how many he said he caught on Friday.. maybe it was 10 maybe it was more. But he did say that he had a 7 and some 5s and 6s. He had caught them on the south shore north of McCown fishing in the coves. He said the coves had been full of shad. He was using Power worms. He said that the fish didn’t bite today. I told him that we had caught ours on crank baits (he didn’t care about the white bass) and on top-water lures. “Top-water! I didn’t throw any top water!” he said.

We were back at the ramp at 11:30. We had fished about 4 1/2 hours. We had 14 big white bass that we kept and 4 black bass. After we started catching the white bass, The Boss had suggested we keep fish today… she is thinking about cooking them up for a bluegrass group that we attend. But, when we got home at 1 p.m., we faced an hour of cleaning fish. I need a new knife… I had forgotten that it had some problems.. it has been a while since we kept any fish. 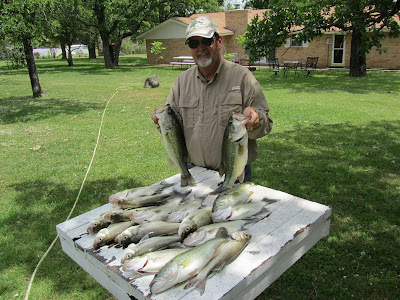 I was smiling when we started but not when we finished. The dogs loved it though.. they like fish… The Boss always hand feeds them some of the trimmings.

Looks like tomorrow is going to be another great day for fishing… just like today without the clouds. I wish we could go but we got “commitments” here…. Dang the luck! Whitney sure looked good today… and I bet it will be just as nice in the morning…. 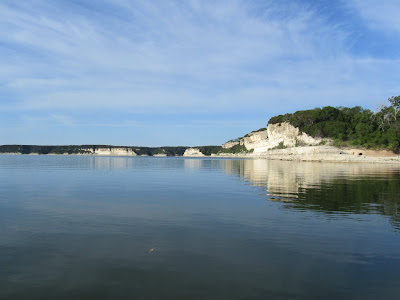 You just can’t beat it for raw beauty… and some awful good fishing.