Yep… it was NOt a Willie Nelson “Uncloudy Day”… it was in fact very cloudy and a little breezy when we got on the lake at 6:15 a.m. We were the second rig on the ramp. In fact, we were the only two rigs on the ramp this morning. This picture was taken about 9:30 a.m. Still really cloudy. 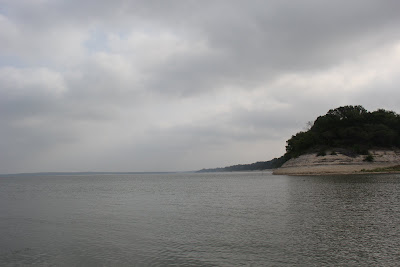 It was about 70° when we arrived at the lake. The water temperature was also about 70° and relatively clear. The little bit of rain we got didn’t change the water color. the lake level is 524.08 or 9 feet 11 inches low, about the same as it has been for a while. We just haven’t got enough rain to make any difference this year. But, the good news is that the lake is staying relatively stable at 8 to 9 feet low over the last 4 or 5 months.

Because of the wind, we were not able to fish the areas we wanted to fish… We had wanted to fish some rocky points, but the wind and the resulting waves were just too much to contend with today so we hunted some sheltered banks in Cedron Creek.

By 6:30 I had my first fish in the boat.. a 5.99 pound fish .. You could call it a 6 pounder. I liked it. It was one of those deal where when you are fishing top water and the lure is just sitting there resting on a pause from walking, it is just sucked under.. no big strike or anything just “slurp” and it is gone. The Boss was busy in the back of the boat with a backlash, yes she occasionally gets them. Anyway, I got to wrestle with the fish for a while until she could get her stuff together and get the net. No, I am not lipping a bass with a lure with a bunch of treble hooks in its mouth… I have had too many hooks in my hand.. and else where. 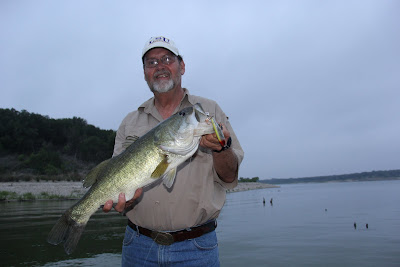 It was still a bit on the dark side because of the clouds. The Boss had to use the flash to get a picture that would work.

I caught that fish on about the second or third cast. I thought we were going to be in for a really outstanding day. Actually, I caught the fish on The Boss’ reel, the backlash she was getting out was mine… it was too dark for me to see how to get it out… and typically, she gets out all my backlashes. She said the fish was half hers because I caught it on her rod… Well, I don’t know about that.. it was actually my old Ambassador, she was just using it because it had a top water already tied on.

We fished for nearly another 3 hours before we caught another fish. and The Boss caught it. 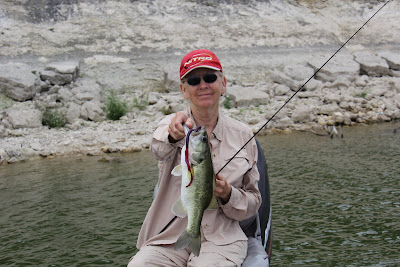 Some of you have commented on the fact that The Boss usually fishes out of the back of the boat… just to let you know that doesn’t always happen.. she gets her chances. Here is a shot of her being in command…. Having got up at 4:00 a.m., I needed a nap. I took this photo when I woke. She is worming a point here. 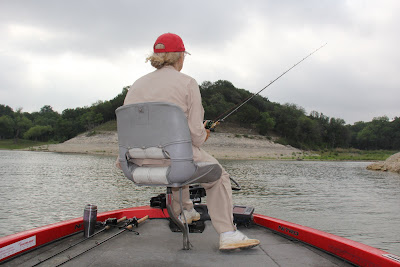 Well, the wind and the slow bites were just too much for us… we were off the lake at 10 a.m. We would have stayed around if we had found some fish.

The two fellas in the other rig on the ramp came in right after we did. They said that they had chased the shad around the bank for awhile, but only caught two small sandies. Then, they went to the humps over by Bee Bluffs and killed the B-I-G sandies on silver slabs. They said they caught 35 to 40 huge whites before the wind got up to much for them. Like us they were not interested in fighting the wind.