Yep, we were back at the lake again today….  I mean, what are we supposed to do… the winds were light, the temperature very comfortable…  partly cloudy…  we gotta be fishing and it was the lucky 7th.

We were up at 4:30… had to drag The Boss out of bed as we were up late at a bluegrass jam the night before.  But hey, we have to make hay when the sun shines as my Dad used to say…  We had watched the weather guessers the night before and it was supposed to be superb. The Boss made us some egg and bacon biscuit sandwiches and a big pot of coffee, for breakfast on the way to the lake… good stuff.

We arrived in McCown Valley Park about 15 minutes after 6.  There was one other boat ahead of us on the ramp and it was gone by the time we were backing down.  The water temperature was 78° t0 80° today and it was reasonably clear for Whitney.  I would guess the visibility was 3 or 4 feet.  As predicted the sky was partly cloudy and the sun stayed behind those clouds for most of the early morning.  The winds were very light and the air temperature was about 65°.   Very comfortable out.  The lake level is 524.13 or about 8 feet 10 1/2 inches low.  The ramp at McCown is in great shape. 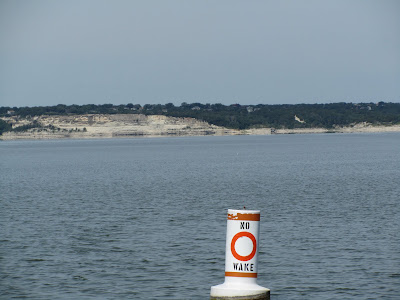 We headed across to Cedron Creek to one of our favorite points….  Low and behold some guy was sitting on it…  or almost.  He was a striper or white fisherman and he was in the creek channel either fishing or catching bait… and there was plenty of bait fish….  Lots of shad.  Anyway, I guess this fellow was new to the lake and didn’t realize that he was fishing on “our point.”   But, we moved on to option two… and that was a good thing.

By 6:30 I had one in the boat and The Boss had lost 2 on top water lures.  The bass were busting shad all around us.   She didn’t miss the hook set, they were just really active and shook off the lure.   On her third fish, a really nice one that probably went 3 1/2 to 4 pounds, she got it to the boat, and it made a dive under the boat and just kept going… lure and all.  She threw down the top water rod and grabbed her trusty worm rod.   Before 7 a.m. she had 4 fish in the boat.  I had caught one more so we had a total of 6.  I thought I was going to be in for another bad day.. one where she catches them all.  But, I gave it about 30 seconds of thought and ditched my top water rod for a worm rod as well.

At the end of the day, I had 5 fish in the boat, and lost one.  She had the four fish and managed to lose another one as well.  I think she was trying to be like Bill Wilcox and throw it in the boat and the line snapped….

The action between 6:15 and 7:15 was really exciting.  We had lots of strikes and boated some good fish.  Most were 2 1/2 pound to 3 1/2 pounds.  I would put our total pounds at some where around 20 pounds of fish.   With the bass busting the shad, it was hard to stop and take any pictures and even when we switched over to the worms, it didn’t slow down much.  We did move to some other areas, and caught a fish or two other than on the initial point.  But most came from one point.

Here are the photos from today, that is the ones we took. 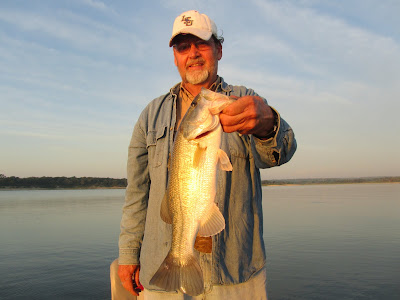 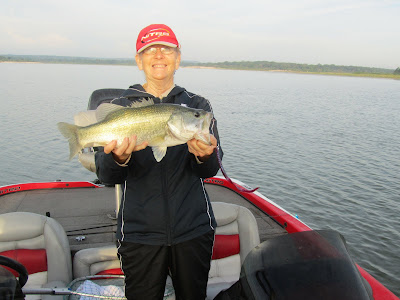 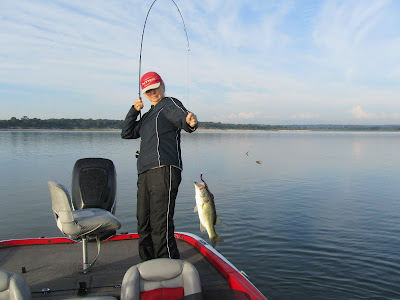 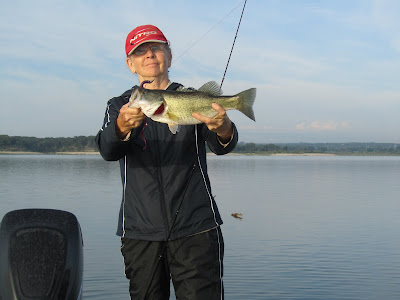 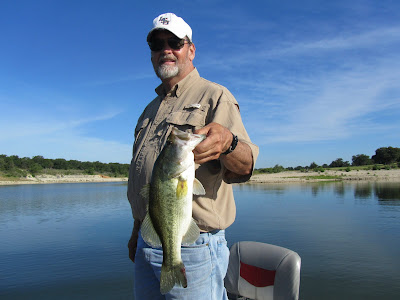 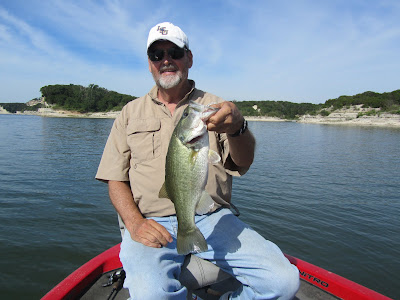 There were lots of active shad on the top of the water.. we could see them in most ever cove and on most points. There were also a lot of Alabama Fish Finders to help you spot the shad. 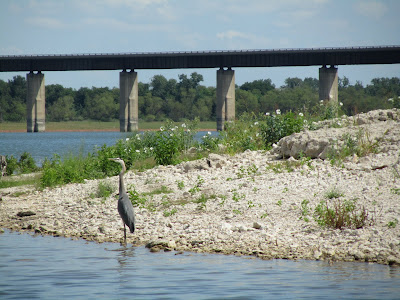 There were also a lot of gulls working out on the lake so I would guess that the whites were active as well.

We caught no white bass or stripers in with the black bass we caught. Most were caught in 2 to 5 feet of water. We had 3 on Academy’s H2O top water lures… and there is one swimming around out there with a blue and chrome one in its mouth. We waited nearly 30 minutes in that spot for it to come back up, but it never did. It took The Boss’s lure and went to deep water. The Boss should have boated 5 fish just on the top water. I caught two on top water and 3 on T-Rigs. The Boss caught 3 on T-Rigs.

It was a grand day on the lake….. Glad we struggled out of bed and made it out there.