Indeed it was a great day… especially for The Boss.

I was up at 4 a.m.  ready to go fishing.  It felt like it had been years since we were on the water, even though it was only sometime last week or actually the week before.  I got the coffee going and gently woke The Boss about 4:30 so we could be ready to roll by 5 a.m. and make the McCown Valley Park gate right at 6 a.m.   It was a bit cool when I went out and opened the shop.. according to the radio it was 65°.    I forgot to tell The Boss it was a little on the cool side and that was a b-i-g mistake.   I grabbed a lined denim shirt just to turn the chill away.   She cooked up fresh biscuits and sausage, filled the coffee mugs and the thermos and we were hooked  up and gone. 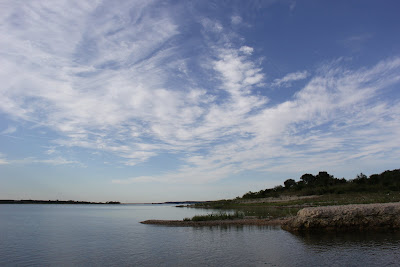 It doesn’t get much nicer than that.

We started out in Cedron Creek. I missed two on top water right off, one on the first cast. I thought I was going to have a bang up day. But we fished for about 45 minutes with out another bite or strike. At 7 a.m. on the nose, I boated my first fish. It was a 2 1/2 pounder, maybe closer to a 3. 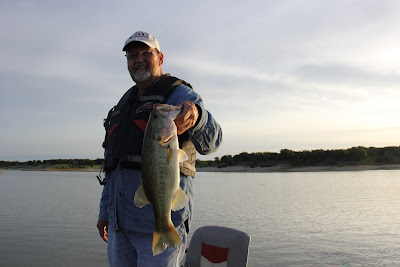 The Boss promptly wiped that smile right of my face. She caught 3 more out of the same hole while I just hauled water…. and of course kept the boat in position for her to fish and of course dipped up her fish. The first one was small, but the other two were about 2 1/2 pounds or so. We got a picture of her first one, but the one after that came on her next couple of casts… same hole. So, I got a picture of her first and last fish from that spot. This first one was small, but feisty. 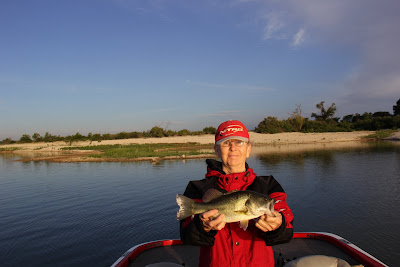 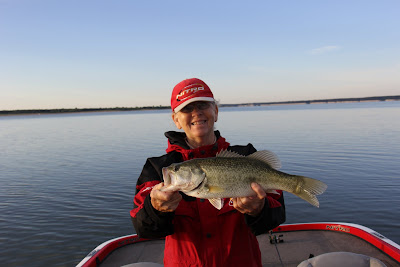 You can tell by the jacket that it was still cool… maybe not quite 70 yet. We caught 4 fish from that hole in about 15 minutes…. or I should say, The Boss caught 3 and I boated one.

We fished on around there for a while but found no more fish. We pulled up and went to another favorite hole. I had barely cut the motor off and got the trolling motor in the water before The Boss yelled “I’m getting a bite”… so, it was back to net duty. This fish was a nice 4.4 pounder on the old Rapala scale. You may not recognize it, but that could be a little smirk on her face. 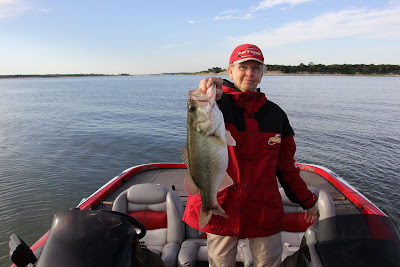 We beat the water around there for a while but no more bites. We pulled up and moved to another main lake point, but had no luck there. We did see this fella fishing with what looked to be a spoon. He was a long way out on the point and was jigging the spoon. We didn’t see him catch anything, but he didn’t move off the spot the entire time he was in our sight….. 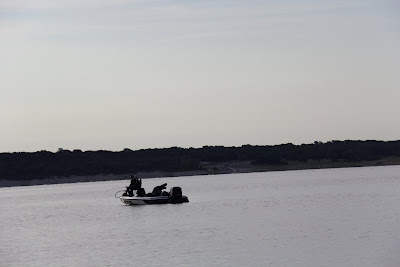 We saw another boat or two, but they were motoring up or down the lake… not fishing the McCown area.

We didn’t find any fish on that set of points so we moved on up to the Bee Bluff area. Same song different verse. I barely get the trolling motor in the water when The Boss is yelling, I’m getting a bite. This one grabbed her Zoom Old Monster and headed for deep water. I heard her growl, “This might be another big carp, he isn’t coming up.” And then, about that time it jumped… looked like an anvil coming out of the water and splashing down… It was time to dig the net out again. This one was a feisty fish as well, but she finally got it to the boat. It was a 5.40 on the old Rapala scale. 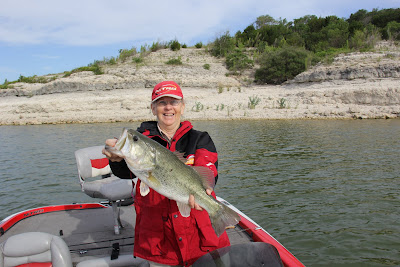 Yes, that is one of those grins… you know what I am talking about. Five to one.. It may as well have been 5 to zip.

Yes, and she wanted this picture of it on the scale. 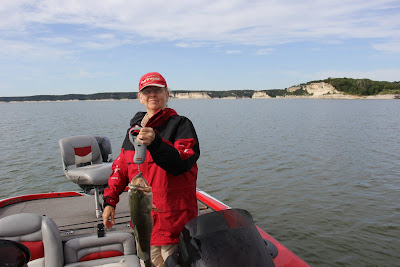 The wind came up a little around 10 and at 10:30 were headed to the ramp.  There were 6 other rigs on the McCown ramp.  I think 3 could have been bass boats.  It was a great day to be on the lake or to be one of the campers in McCown or Cedron Creek Parks.  The weather was just great and the fishing was pretty darn good… even if most of mine was net and guide duty.

I just have to figure out what she is doing differently with that worm…  I am fishing the same lure and not getting any bites.

A little chicken and tater tots from Sonic and we were on the way back to the house.