August is usually the hottest month in Texas.  But today, the weather was unbelievably nice.

We were up at 5 a.m. this morning.  Weather.com had predicted light winds for this morning and they were right on target.  I did not pay any attention to what they said the temperature was going to be so I was really surprised when I walked out this morning to find “cool” air.  I think the dogs liked it, they were still asleep on the carport.  The old “Big Dog” was sawing logs.

Water Clarity:  The water was clear in some locations and dingy in others; it just depended upon  the location.

The ramp at McCown Valley Park was in good shape.  We launched without any issue and we were the 3rd or 4th boat in the water. In fact, there were only 3 other rigs on the ramp when we headed down the lake.    We also noted that at least one other boat had launched at Cedron Creek Park and then we saw 3 or 4 more launch from there during the morning.  The ramp at McCown had another dozen or so rigs on it when we returned to the ramp so there are no issues launching at either McCown or Cedron Creek Park.  The Corps sliding docks were in place and functioning on both ramps.

For a Saturday morning, there were relatively few boats on the water in the McCown Valley area. However at 10:30 when we left, the wake boarders and ski boaters were hitting the water.  But from 6:30 til 10 a.m. we fished anywhere we wanted and were not bothered by anyone or any boat wave issues. 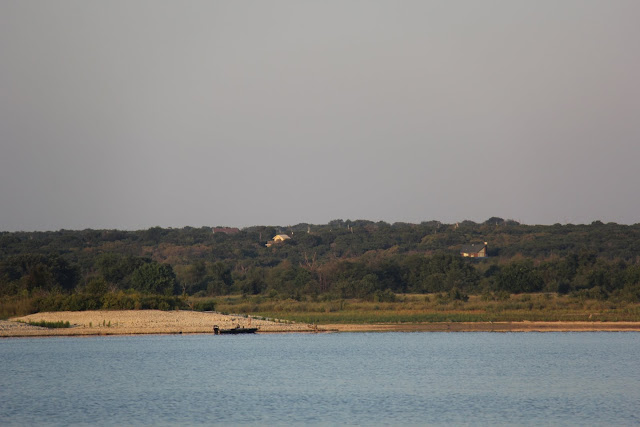 A couple of guys bassing.. 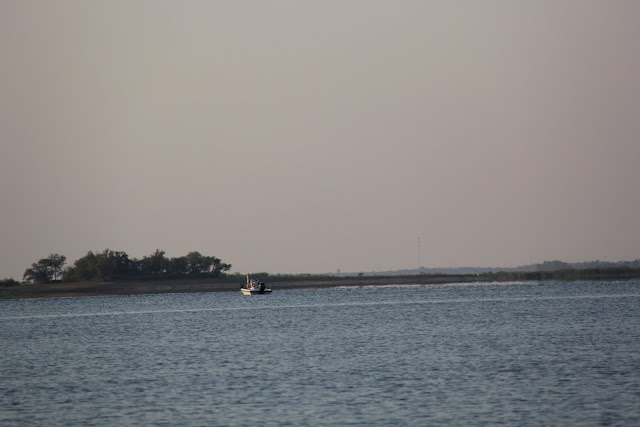 A white or striper fisherman

Fishing was another story…  We had some bites, or I should say, some fish picked up our worms and were easing off with them.  The “bites” were very light.  There were no tap-taps and we had a really tough time getting hooks into the fish.  The Boss finally got one, but I missed 4 or 5.  I am going to say that it has been about 3 weeks since we have been on the water.

We found a few fish with the sonar.  For the most part, they were hanging on ledges of shallow flats dropping off into 18 to 25 feet of water.  This was the kind of area that the Boss picked up her fish.  It was a keeper, but only just barely. 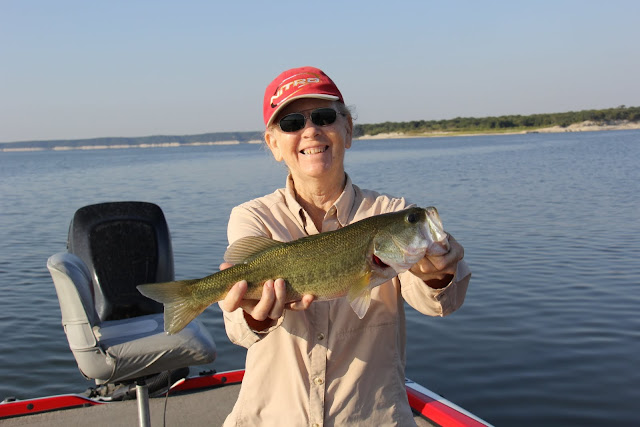 The Boss is always happy to boat a fish.. especially when I don’t have one…

We gave it up at 10:30.  We had fished the Cedron Creek and Bee Bluff areas and the wind was picking up a bit along with the boat traffic so we called it a day.  I hated to let The Boss “whup me again” but that is the way it goes some days.  The water temp at 10:30 had increased to about 85°.

I would like to pass along a suggestion or two to boaters in general…  I know these don’t apply to the guys who fish, but really to the ski and wake board folks….

We saw and experienced all of this stuff today…. I guess it is Saturday and the folks who only use their boats once or twice a summer must have been out…  And, I guess we are used to fishing on the week days when we don’t have to content with this kind of stuff….   And, for those of you who want to avoid this stuff, remember that Labor Day is coming up soon.. you may want to find some ramps that are not so popular with the occasional boater….  You know you might want to head off to Aquilla or one of the other lakes and areas not frequented by the “infrequent (as inexperienced) boaters…  just saying.   I guess it is a good thing that fishing is such a relaxing sport and puts a person into a really good mood no matter what is going on around them in the world.

And, on another note….   don’t forget your fishing licenses may be coming up for renewal… Time was when all the fishing licenses in Texas expired on August 31, many of us still renew then even though you can now get licenses that renew on the date of purchase, whenever that might be…. If past experience is any indicator, the Texas Parks and Wildlife Game Wardens will be out checking folks on Labor Day weekend.