Labor Day is history… And, with the holiday gone and the wind down, we were on the lake again today. I love it when Central Standard Time is such that the sun doesn’t come up until 7 a.m. Makes it so much better when you can get up at 5:30 rather than 4:30 a.m.

Well, we are getting old and out of practice going to the lake. With it being hot, we haven’t been on the lake as much lately… we are averaging about once a week now-a-days. We had a couple of those Uh-Oh moments today… The Boss fixed us up some HAM biscuits today and loaded them in the snack bag… and I put the cell phone on the counter with the camera, sun glasses and such… We drove off and left the snack bag and the phone… That was OK… we stopped at the Shell Station going out of Cleburne and the nice young lady in there fixed us right up with some “special” sausage biscuits. And, we didn’t need the cell phone on the lake to bother us anyway…. We made it just fine without both.

There were two rigs on the ramp when we arrived, one was gone, the other was just leaving. There were 4 rigs other than ours when we left at 10:30.

We fished for 3 1/2 hours this morning. I had one bite. The Boss put one bass in the boat. It looked to be a fat 10 incher. We saw no birds working. And we saw no shad working in the Cedron Creek area. We did see scattered instances of shad breaking in the Bee Bluff area and it looked like the occasional bass striking in amongst them. But those instances were definitely scattered and they were gone before we could get a lure in the area.

We fished top-water, C-rig, T-rig, square-billed crank baits and rattle traps. My bite came on a C-Rig, The Boss caught hers on a T-rig. There were at least 3 other boats fishing in the Cedron Creek area, the most we have seen on a week-day in a long time.

And, it was a lazy day of fishing… 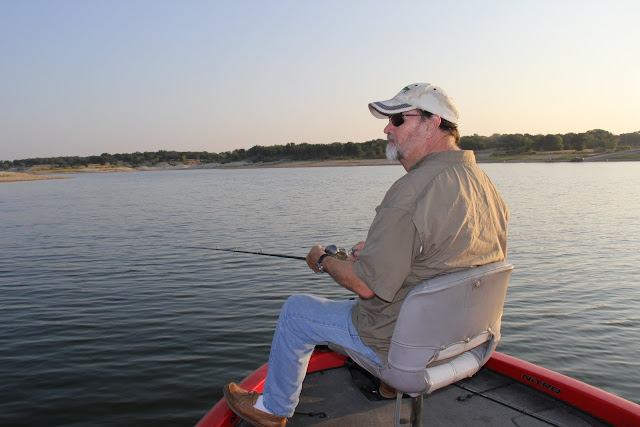 With the light winds, I was able to spend most of the day sitting down rather than standing up. This is a good thing when a person gets old.

The ramp at McCown remains in good shape and the Corps still has the sliding dock where it is useable.   I would recommend sticking with the middle lane. 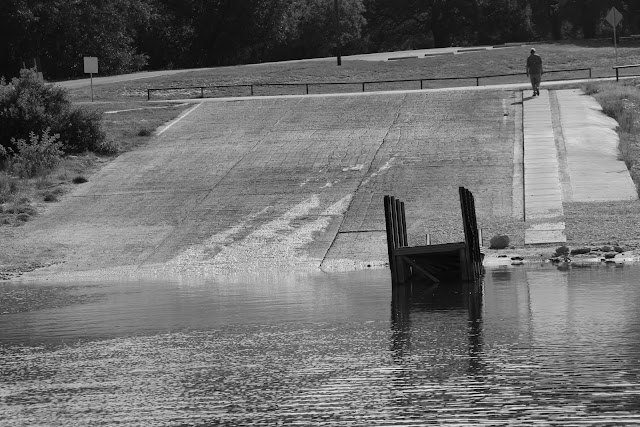 You will have to pardon the pictures of the ramps. I made a mistake on the camera settings… turned it to black and white rather than just turning off the flash. 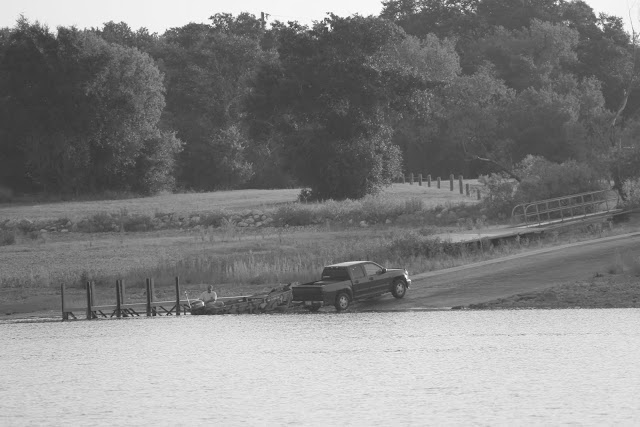 This fellow was loading up just as we were starting to fish….   I think maybe he had some jugs out and had been night fishing.

Well, it was a nice lazy day on the lake.  Even though it was about 90° when we left at 10;30 we never got too hot because of the light breeze. And, because there wasn’t much wind, it wasn’t “work” to fish.   We were able to sit on our spots and work them without much effort….

While we would have liked to put some more fish in the boat…  you can’t beat a day on the lake, especially when the weather was as cooperative as it was today.