Hey, what a relief it is to get away from all the bull stuff that is going on now a days….  even a very cold day on the lake is a good thing… better than working, better than watching the news… better than a lot of stuff.

Joe, my youngest son, and I went to the lake yesterday afternoon.  Joe had a little time off from work and we both wanted to spend a little time on the water.  It was up to 43° when we arrived at the ramp about 12:30 p.m.  We did first make a stop at the Pit Stop for a burger before we got there.  They make the best burgers and fries in Whitney….  That burger must have weighed nearly two pounds… it was huge and the fries were fresh cut potatoes…  good stuff.  I couldn’t eat all of mine and neither could Joe.

There was a bit of breeze when we got there, the wind was about 7 or 8 mph… not to bad to fish in, but pretty brisk when it is in the low 40’s.  We had our winter gear on, Joe had the heavy stuff and I had the medium duty… he was the smart one.  Sitting in the sun, I was warm on one side and cold on the other, especially when the wind was hitting that “other” side.   There was no one else on the ramp when we arrived and we saw only one boat on the lake and that was sometime after 3 p.m.  We launched at McCown Valley Park.  We checked at the gate when we went in, they advised that the ramp was still usable, but to stay in the middle of the ramp.  There is a “hole” on the side next to the sliding boat dock.  They advised that a fellow launching a pontoon boat had dropped both wheels of his trailer off in it a few days ago.    It would have to be a hole because the depth finder showed that the water level there by the ramp was only a little more than two feet below the bottom of the boat.  The lake level is currently 521.57 or about 11 feet 5 inches low.   We didn’t have any trouble getting the boat off or on the trailer, but I am guessing it is getting close to not being functional at McCown.  The good news it that the water is not evaporating…. 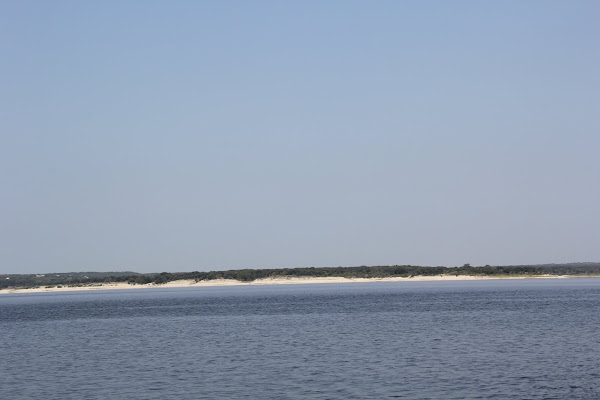 We had the lake to ourselves….

The water seemed a bit on the murky side and was 55° to 52° depending upon where we were fishing.  When we first got there we found a cove along Bee Bluffs and gave the bass a shot along a point and deep drop off we know about that sometimes holds fish in the winter.  But we didn’t get a bite and the fish finder didn’t show any thing.   But, we had brought along a couple of dozen shiners just in case.

We motored out to the river channel up around the mouth of Cedron Creek and found a pretty good school of whites that seemed to run from 15 to 30 feet deep.  They were not starving, but they did pickup and occasional shiner.  The bite was just good enough that it was entertaining and took our mind off the wind and cold.  We boated a few fish and ended up keeping 8 nice whites and we put about that many more back, small ones.   We fished until about 3:45 and then hit the road to Burleson.   We wanted to get those fish cleaned before dark.

All in all it was a good day…  no problems on the trip down and back… no boat issues… the weather was pretty good though a little cool.  We had a great lunch.  Got in a little father and son quality time…  can’t beat that with a stick.

We did see a few birds, gulls, start to gather and dive around 3:30.  That is a good sign.  We haven’t been seeing many gulls working lately.   Maybe the white and striper fishing is going to pick back up.

And by the way, that is our new pickup.. well it is about 3 months old now.  We still have the old one, but thought we needed a new one since the old was is 15 years old now with 220 thousand miles on it.  I really like this one… a big engine and a 6 speed transmission. It pulls that boat like it was a toy.  I like  the GMC … good trucks.

I do want to pass along a little story.  The Boss and I were sitting in a Schlotzsky’s deli in Fort Worth on Tuesday enjoying a senior’s lunch there when a fellow walked up and asked “Are you guys the ones who write the Whitney Lake Blog”?    It was pretty funny….  sitting in Fort Worth and having someone recognize us in a restaurant full of people.  He said he was from Austin and came up to Whitney.  Read our blog to keep up with the lake levels and such on Whitney.  Small world.  And, we always enjoy meeting and visiting with our readers.

The water is fine… come on down… you might accidentally catch a fish or two.