Like I was telling a fellow at the ramp, we have not been out much this year….  Lots of “stuff” going on in our lives.  But Monday, all the moons aligned and we made it to the lake.   The time had changed and sun-up was a little after 8 a.m.   We were at the ramp by 8:30 a.m. but 7:30 would have been perfect.

Stats for the day:

The ramp at McCown was still usable.  But, my observation is that the Corps sliding dock has been pushed out as far as it can go and the ramp itself is going to be marginal pretty soon.  The hole in the ramp next to the dock is clearly visible.  I recommend using only the middle lane.  Here is the photo: 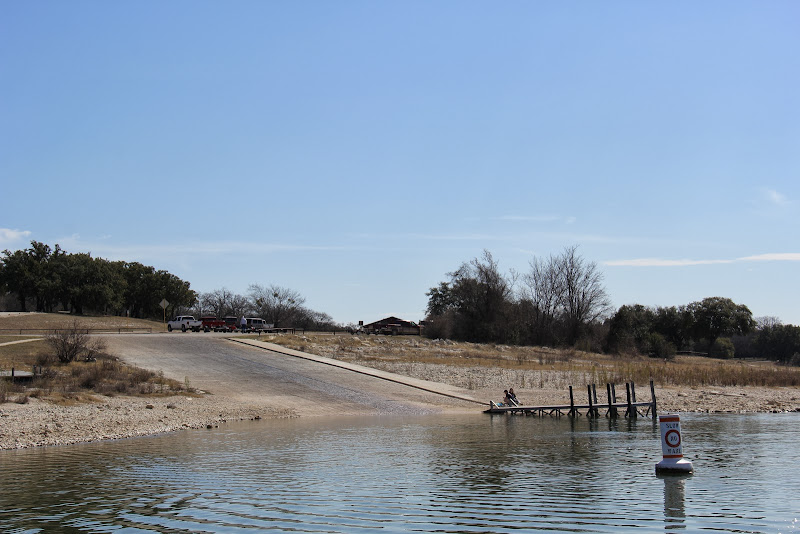 There were some “spring break” folks in the park, but not a lot.  This is a shot from the ramp of the camp grounds across the cove from the ramp. 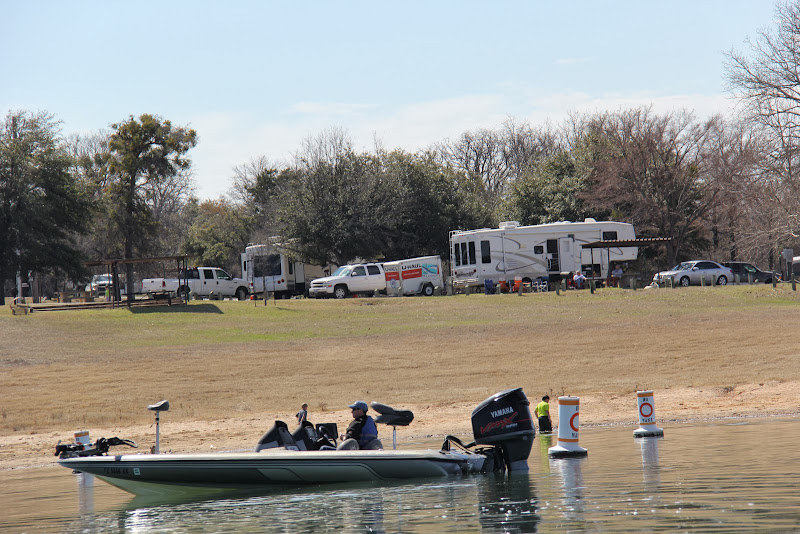 We met a couple of our readers on the lake.  Ed was at the ramp launching his boat.  He said he had been catching a few fish over in Cedron Creek and in the coves along Bee Bluffs, but yesterday morning he opted to go up the lake.  Over in the Cedron Creek area, we met up with Jeff and his buddy Billy.  They had one fish that Jeff had taken on a hot spot or rattle trap.  Jeff had  come over so he could meet the “The Boss.”   We had a good visit with them.

The Boss and I fished crank baits (a rattle trap), a little top water (in the shallows), and a C-Rig and a T-Rig.  We did not get a bite all day.  We marked a few fish hanging on ledges in 12 to 16 feet of water, but could not get any takers from them.

It was a great day on the lake.  The wind stayed down and fishing was easy.  We relaxed and enjoyed being out in the sunshine.  It was a little cool early, but had warmed to about 55° when we left around noon.   Maybe things would have got a little better as the day went on.  We did note that the water temperature came up from 48 to 50 degrees as the sun came on up.

With the lake being down as much as it is, some of the ramps are going to start to drop out.  From our experience a couple of years ago, we know that the ones that will stay open are:

In the mean time, there are others that are open, but I suggest that you use caution with the ramps.

Well, we didn’t catch any fish, but it was a great day.  We came home and napped and then The Boss cooked some sausage and chicken on our pit grill out back.   Nothing like a meal prepared on an open fire in the evening.  Good stuff.