The Boss and I were up early, well sorta, this morning.  We got up about 5:30, loaded up and were rolling into McCown Valley Park about 7:05 a.m.  It had been light about an hour and a half.

There were 4 other rigs in the parking lot when we got there.  We were on the water by 7:15 and fishing.  The ramp at McCown Valley is in good shape.

Someone asked me the other day about tracking the release rate at Whitney.  The Corps provides this data on their page. It was 25 cffs today according their page.. barely releasing any today.   I don’t think the Corps is releasing a lot of water from Whitney based upon what I have seen.  The rains just have not had much impact.

Well, the Boss and I fished the Cedron Creek and Bee Cove areas.. and so did half a dozen other boats… that is a lot for a Thursday.   At one time The Boss looked around and she counted 6 boats in sight… but I am guessing there were a dozen or more fishing the main lake area around McCown Valley.

It was a great day on the lake.  The Boss boated 3 fish… I zeroed.  We both lost several others…..  I had a line break on the hook set, and then some just get off.  The fish seemed to be just barely picking up the lure most of the time and we would just feel the line get heavy.  I just couldn’t get one in the boat.   I did have two on for a while, but never saw them.  The Bosses fish were small, but they still counted… at least that is what she told me.

Here are a couple of nice photos The Boss took… she is becoming quite the photographer. 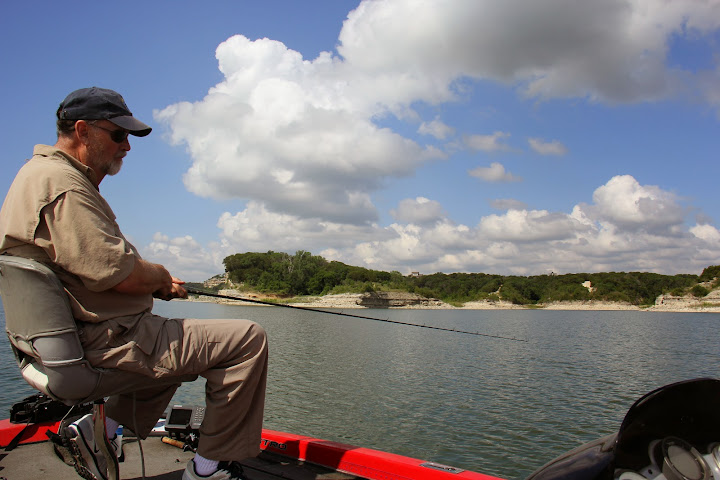 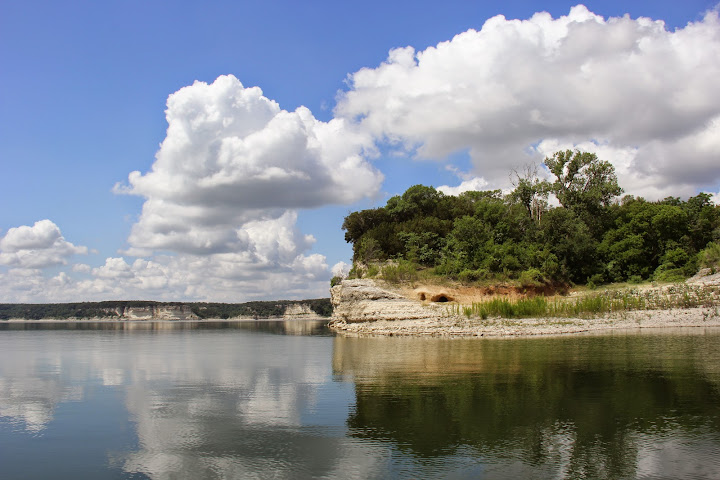 I think the folks who got to the lake early, as in at day light probably caught some fish.  We noted that a couple of boats didn’t move from their locations for an hour  or so after we got there.  And we did see some small batches of shad working with fish hitting in them.   We just couldn’t get them to hit what we were throwing.  The Boss fished some top water and I fished some shallow diving crank baits.   Eventually, she went to a T-Rig and I went to a C-Rig.   Her fish came on the T-Rig.  My “misses” came on the C-Rig.

I do have some other reports from some guys that know how to fish.  Keith and Buddy fished Friday, May 23 and Monday, May 26.  Here are the reports they gave me from those days…. well, I did edit them a bit.

Friday, May 23:  Bud and I fished Whitney today, ended up with approx 12 – 14 fish, with 7 keeper size. Bud kept 4 for dinner and we released our best 3 fish, all in the 4 – 4 ½ lb range, the larger fish were completely spawned out, very thin. We put in at Cedar Creek Park, (which has New Rest Rooms) at the ramp. But they were locked ?? Go Figure. Fished the Cedar Creek Area, Juniper Cove to Redwood Lodger Coves and main lake points. Again Buddy Spanked me, With a Zoom Speed Craw, Watermelon, Chartreuse dipped pinchers.   I had 1 keeper and three short fish. Also had 5 or 6 Sand bass early, around the ramp area.   I got a nice photo of my best fish with the Juniper Cove Fishing Dock in the background, This fish came on C-Rig and had one that I broke off on the hook set, just before I caught this one. We got to the ramp about 7:30 and left about 3 pm. 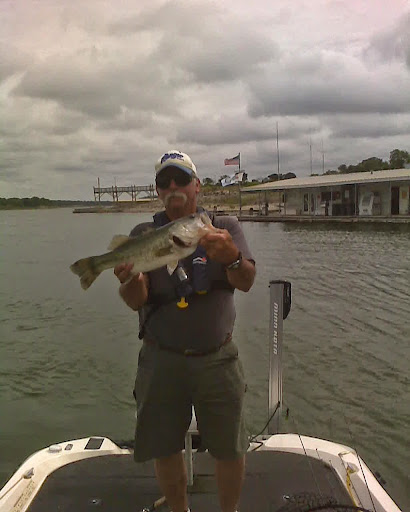 Bud and  I went to Whitney today. We launched at Red Bluff Ramp, got in the water at 8 am.  We started out in White Bluff area, fished outside and in the coves, Really bad, I finally caught 2 sand bass and 1 little black about 8 in. long. We fished the rock jetties ( Old Pioneers Cove) I caught a channel cat about 4 lbs. Then fished our way back to the Point at Juniper Cove, where we had 4 bass last Friday. “Nothing” Took off back up to White Bluff area, fished some timbered shoreline, Nothing. Headed back to the Old Red Bluff Ramp, at the end of Red Bluff Point.  Buddy finally caught a fish, about 3 lbs, then I caught one about 2 lbs, then Bud caught another one about 2 ½. This was about 12:30 pm. Fished our way up toward Lakeside Village We finally pulled into a pocket on the Red Bluff Bank. I picked up a black buzz bait, and caught our best fish at 1:30. A 5 pounder. Then I caught one about 2 lbs. Then Buddy caught 2 or 3. We fished till 4 pm. Ended up with a total catch of 9 black bass, 2 sand bass, and 1 channel cat. We struggled but finally caught 8 of our bass from 2 places, the big trees at old red bluff ramp, and the one pocket where the big fish came from. Thought it was going to be a bad day, all the bass we caught were keeper size, except for the one 8 incher. We didn’t keep any fish today. Rained on us from Rio Vista to the Lake, But stopped before we got unloaded, and never rained any more. They have built a new rest room at the Red Bluff Ramp, just like the one at Cedar Creek Ramp. These were locked too. Buddy said these are prefab restrooms, they haul down on a truck and then pour cement in front of them. They have solar panels on top for electricity. 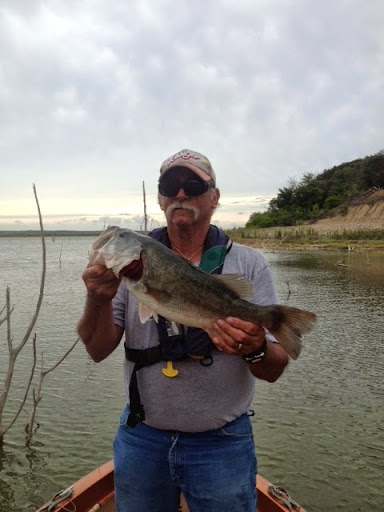 Say, this is starting to look like the Keith and Buddy blog….  well actually they are pretty good fishermen.  And they give some great reports

I think The Boss and I just got to the lake a little late this morning.  I think the shad had been running.  There were birds working in a number of spots.  I just think the surface activity had slowed down big time.  I guess we are going to have to start getting up at 4:30 and leaving for the lake.  Besides, it is starting to get hot out there by noon, so the earlier the better.  We did note that the cows were feeding on the trip down, but they were lying down on the way back…  just goes to show.

Have a great day and make a trip to the lake…..