Well, it was another fine summer time morning… 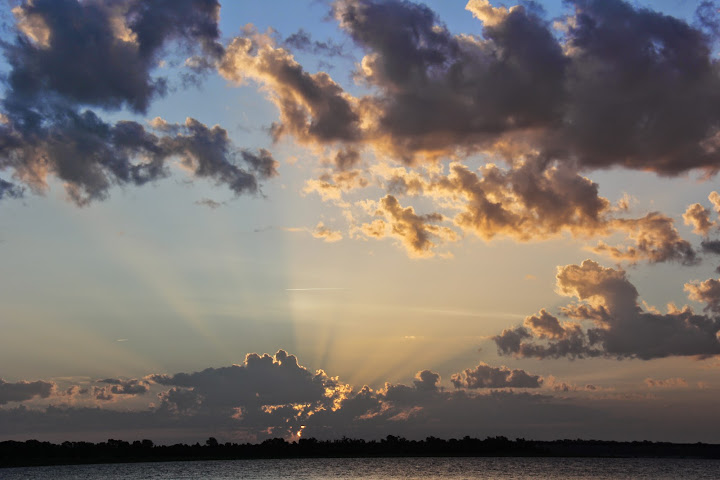 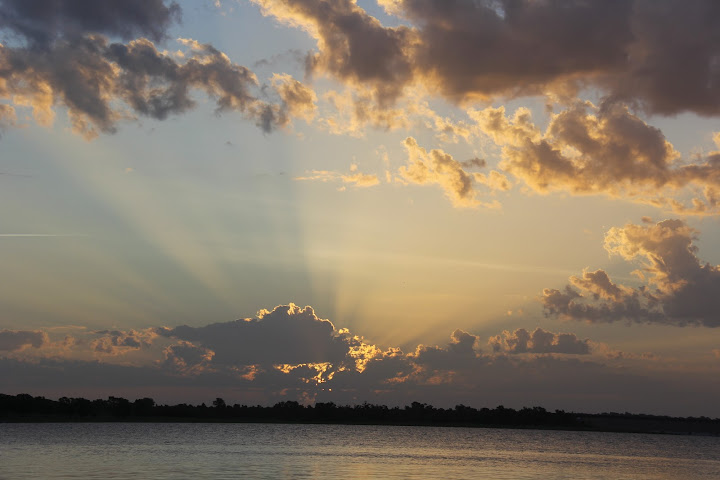 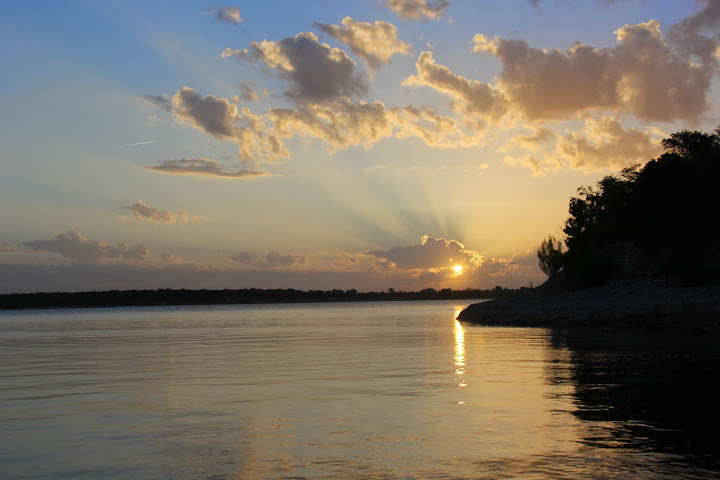 Doesn’t get much better than this….

We rolled into McCown Valley Park at 5:58 and were on the water by 6:05 a.m.   We were the second boat there.  We noted a few die-hard campers still in the Park….  It wouldn’t be as comfortable today as it was on the 4th.

Actually, the lake seemed to be up a bit.  There were some stumps we fished last week that we couldn’t find today.  But, the water level data is from the Texas Water Development Board’s “Water Data For Texas” web site…. it is one of the two or three officious sites….

It was too dark to tell if the cows were feeding on the way down, and I slept on the way back so I don’t know how that factored in today.

The ramp and boat dock are still in great shape.

We were fishing by 6:10… but we didn’t catch a fish until a little after 7 a.m.   They were schooling and feeding on shad in shallow water just like last time out.   We boated 5 small fish. 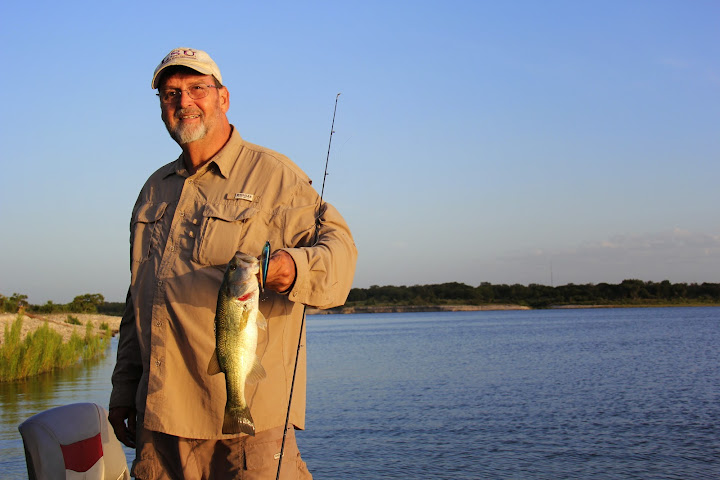 H2O top water for me

Worm for The Boss 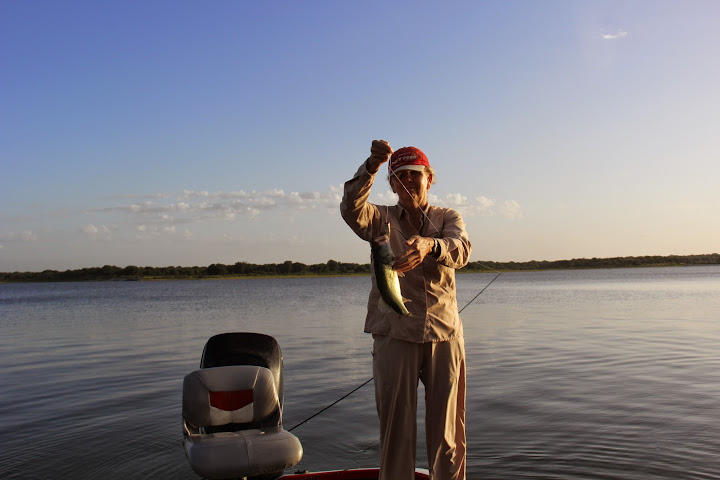 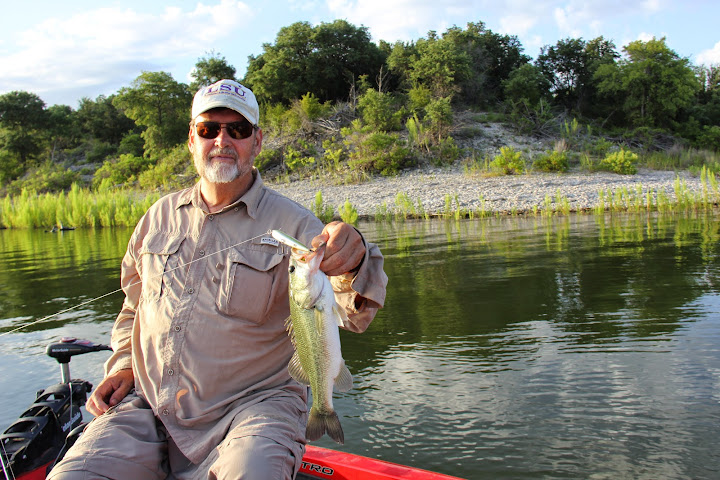 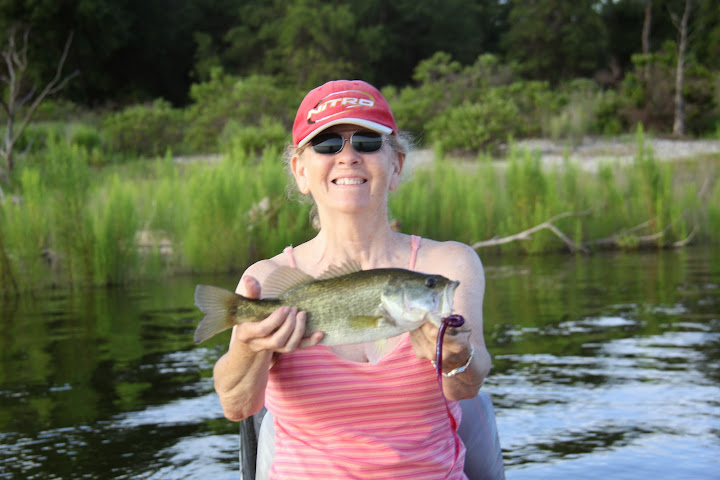 She likes them no matter how big they are….

Actually, my Dad used to say:  “Where there’s little ones, there’s big ones.”  Maybe next time we will find the big ones.

There were one or two birds working, but we didn’t find any shad or bass around them… 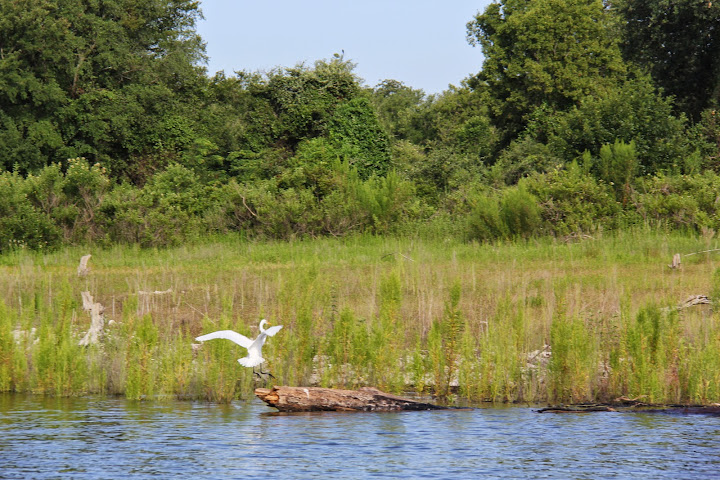 We had a good morning….   we caught 5 fish.  I caught mine on top-water, The Boss boated one on a Pop-R and two on a worm… she likes to fish that worm.  The fish were schooling in the shallow water; feeding on small minnows.   Once we found them, all we had to do was cast the lure in amongst them.  If they missed the top water lures, The Boss followed up with the worms.

It has been too windy to fish where we wanted to so we fished where we could.  After they turned off in Cedron Creek, we tried some of the creeks up toward Cedar Creek and then some of the big points in Cedar Creek.  We didn’t get a bite up the lake…..  We quit at 10:15 and were loading up the boat at 10:30.  It was 93° on the ramp.

But, it was another great day… a blessed day.   We had fun, but the heat wore me out.  The Boss had to drive back while I slept… she doesn’t like it if I drive while I nap….  of course when she drives, the only way I can stand it is to sleep…

I had spent the 4th repacking the bearings on the boat trailer… they needed it.  And, I put new brake pads on the trailer while I was at it….

And a little tip for you…   My trolling motor prop had several nicks and dents in it…   Friday, I took a file and smoothed those out.. it was a lot quieter today.