Now this was a July Day….

Yep… really a typical summer day… hot and the fish were hard to find.

Actually, it appeared that the water level could have dropped a bit more than that, but who knows…  we just report what the State of Texas reports….  just looked like a lot more than a 1/2 inch…

We checked Weather.com last night and this morning… it forecast “sunny skies.”   But, that did not happen.  It was very cloudy and the humidity was almost so thick that you could have cut it with a knife.

We were fishing at 6:10 for all the good it did.  It was actually pretty dark.  Sunrise wasn’t until 6:34 officially.  We actually needed the running light both Saturday and today.  But, other than being fishing, we could have been doing a lot better having coffee in a cafe somewhere.   It was one of those “woulda, coulda, shoulda” days…   We shoulda fished some place else… up the lake, down the lake or over in Aquilla.  Either the fish were not biting or they were not where we were or they didn’t like our lures today.  We threw Pop-R’s, Zara Spooks, Buzzing Rex Spoons, and Texas Rigs.  It was tough.   The wind was high enough that the waves were sizable and I thought the bigger profile of the Spook would work better than the Pop-R.  But I think the noise of the Pop-R won out..  At least The Boss caught one short fish on a Pop-R.   I zeroed with the Spook.   I changed to a Pop-R, but it produced nothing.  We also threw a Buzzing Rex for a while, but I thought it was too small for the waves, to hard to see and hear.

We wore out the spot we fished on Saturday (where we had had a ton of fun), but turned up only the one short fish.

But, we were having fun.. any day on the lake beats almost anything else we could be doing.

Fishing hard or hardly fishing…. who is to say

Yep, she is working that worm with that old Ambassador… she loves that reel…  she has 3 or 4 nice Curado reels, but she is usually fishing with that old round reel.

We fished further up Cedron Creek and then went down to Cedar Creek.   She picked up another short fish on a worm in Cedron Creek, and I had a good bite on a T-Rig up in Cedar Creek.  That was it.  There never was a bite of any kind.   All that ice gone to waste….   I was ready to take some fish to the house.

We left at 10:30.  It was 89° when we loaded the boat and wiped it down.  There had only been one other rig on the ramp when we launched and a few more when we left. 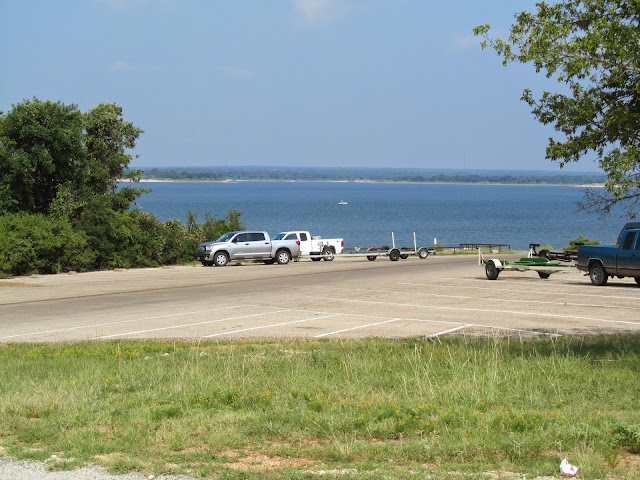 Four rigs on the ramp at McCown Valley Park

This guy was fishing for something… not sure what….

Is he getting a bite?

While we didn’t catch any keeper fish, The Boss still had her two and she didn’t let me forget it.   One on a worm and one on a Pop-R, both in shallow water.   We did fish some rocky points and ledges, and that was where I got my one bite on a worm.

But today was just like those old western movies… Slim Pickens was staring today.