It IS winter time and it is not even Thanksgiving yet… We have been spending a lot of time inside. We didn’t even get to the lake once last week.
I have been thinking lately about the bass catching we have been doing at Whitney…. Bass have been few and far between for us and have not been of the size that we have caught over the past 12 or 14 years.  Today, I am just piddling with some numbers…

Actually, I really started thinking about this a couple of weeks ago when my friend Buck Hammond and I went fishing on Lake Whitney. Buck plays harmonica and bass guitar.. and likely anything else he decides to pick up. At one of the jams, we were visiting about fishing and he said he would like to go and show me the places that he used to fish and load the boat. He said that he hadn’t done much fishing since the early 2000’s, but he still knew where his spots were. So, not being opposed to learning more about the lake… I took him up on his offer.

It turned out that Buck wanted to show me his white bass and striper fishing locations rather than black bass, but that was OK. We had a good time and we fished and caught a couple of dozen small stripers and whites, but the significant thing to come out of the trip was Buck’s discovery that the fish were not “stacked” in the locations he took me to. This was a familiar sounding story to me. It was this trip that really got me to thinking!
The Boss and I have been fishing Whitney since about the time Buck quit. Initially, we learned the lake by fishing the banks at all water levels from 10 feet high to 16 feet low. We learned the locations we fished by studying the lake structure as the water level went up and down and as we caught fish. It was clear that some locations and structures held fish at certain times of the year and others didn’t. There were clear patterns.

However, the last two years or so, our “catching” has dropped off. We definitely are not finding as many fish and they are certainly not the size and quality that we have experienced in the past.

A couple of weeks ago, I contacted John Tibbs of the Texas Parks and Wildlife Department. I believe he is one of the biologists for the Central Texas area and Lake Whitney in particular. I asked John if TP&W had any studies or surveys of the fish populations in Lake Whitney. Mr. Tibbs gave me link to this study:

There I was able to find the PDF of his complete report (side bar on the left hand side). The study covers the major fish types found in the lake. But I was especially interested in the Black Bass portion.  The survey is a couple of years old, but it is what he had.

Truthfully, I couldn’t completely understand the graphics, but after an email or two with Mr. Tibbs, I think I have the drift of it. Following are the graphics for the Bass Survey taken with electro-shock or electofishing as TP&W calls it for Black Bass: 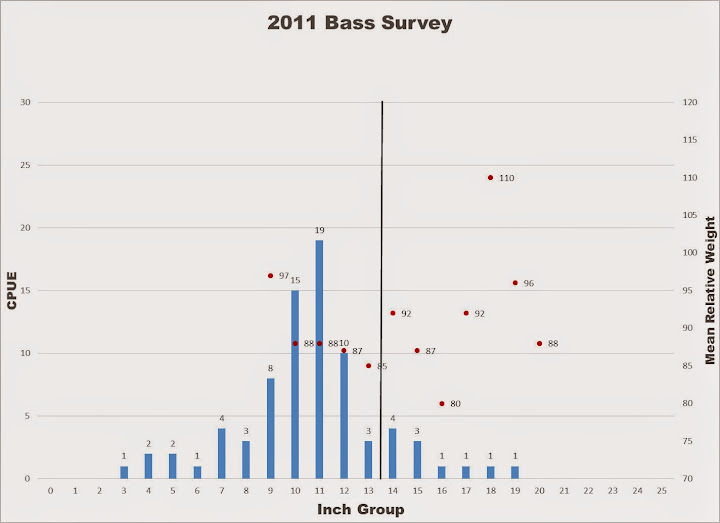 The black line down the middle of the charts is the indicator for the length of keeper fish.. 14 inches.  The numbers at the top of the columns are the numbers of fish in that length, caught per hour.   The numbers beside the red dots are the percentage of the norm or mean relative weight for that category, as in if a 19 inch fish has an average weight (whatever that is), the number represents average weight of the fish electrofished compared to the normal weight as defined by TP&W for that length.  Take a look at the 2011 Bass survey and you will see that all but one length, the 17 inch category, are below 100% of the normal weight.   That means the fish were generally skinny in 2011.

The electrofishing surveys were taken at the locations indicated by the RED dots on the following Map:

These surveys were taken every 2 years. I did not include the Legends from the graphics  But, as I indicated, after an email exchange with Mr. Tibbs I got the drift of what I wanted to know. These surveys are “samplings” to indicate the lengths, weights and populations of fish in each category, that is black bass, white bass, small mouth, etc.  Since we only fish for Black Bass; that is all I am addressing here.

Generally, the vertical bars reflect the relative numbers of bass in the lengths (inch groups). The red diamonds represent the relative (percent of the average) weights of the fish in each group compared to a multiple year average as shown on the right hand scale.

CPUE.. WHAT DOES IT MEAN OR NOT…

“CPUE, or catch per unit effort, is the number of fish collected in an hour of sampling, in this case electrofishing.  This measurement only gives us a “relative abundance” estimate of fish by length in the sample.  The assumption of course is that the sample is representative of the population as a whole.  Our sample locations are randomly determined so that this is more likely to be the case, and is the best method to ensure this.  Bias in the sampling gear can and does impact the numbers and sizes of bass that are collected during any sampling trip(s).  In Lake Whitney, the largest source of bias is low water, which does depress bass populations, but also biases our sample in the following ways:

Take a look at this simple chart of the numbers… 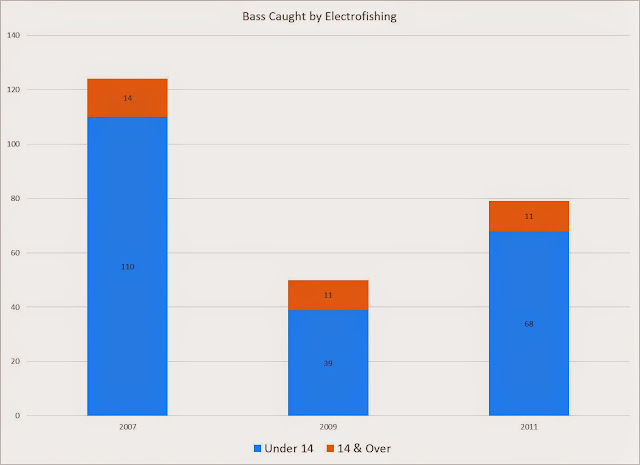 Following is a chart that lets you look at the numbers of fish caught per hour by length comparing them side by side for each year.  Of course, these numbers are those reflected in the survey which Mr. Tibbs indicated was taken in shallow water, (less than 6 to 8 feet).  But if it is reflective of the entire population of the bass in Lake Whitney, there was a significant drop in the population between 2007 and 2009, with some improvement in the over all population by 2011.  But… there was no change in the over 14 inch fish… at least according to this set of surveys.

In this chart, you can see that in 2007 there were lots of small fish, but by 2011, there was a better distribution of fish.

If you look closely at Mr. Tibbs’ explanation of the electrofish method, most of the fish caught were in less than 6 feet of water.  This says that the majority of the bass in shallow water are small or short fish.

There could also be an impact from the lake level at the time of the surveys.   Mr. Tibbs indicated that with the lake down, there is less shallow water and the fish in deeper water are not surveyed.  The following Chart illustrated the Whitney lake level during the times of the surveys. 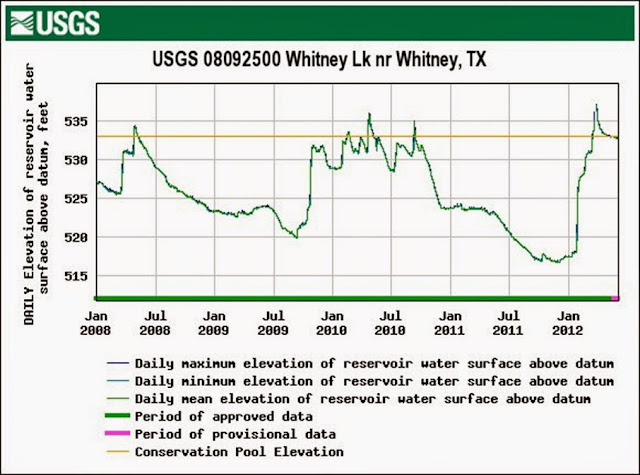 Somewhere in the full length report, it indicates that the studies were conducted in the FALL of the year.. so fall of 2007, 2009 and 2011.   All of those periods could have been times when the lake was significantly below normal and falling.  Perhaps another reason why the fish population is small.

All that said… it is now fall of 2014, that is three years since the last survey information we have.  Even though the surveys indicated that the bass populations of fish over 14 inches were small, I think that a review of our blog shows that we have been pretty good fish up until this year.   We don’t have any officious information which can tell us anything about the fish population now.

I also know this, The Boss and I have some 26 locations that are classical structure that bass typically hang out on. We have fished these locations over the years and in the past they held fish. Just as the locations my friend Buck pointed out should have held fish based on his past years’ experience. We are not seeing the numbers of fish on the fish finder that we used to. In fact, in most of the locations, we are not seeing fish at all now when they used to be stacked in there. Maybe they have moved, maybe there are just fewer and smaller fish. We don’t know.

What we do know is that the depth finders / fish finders don’t lie and we are not seeing fish where we have in the past.

We really appreciated receiving the full survey from Mr. Tibbs and Texas Parks & Wildlife. Mr. Tibbs indicated that they would not be electrofishing Lake Whitney again until fall of 2015 so no new data until then.

Mr. Tibbs also said: “We are working toward deploying fish attractors in all of our reservoirs and that is something we are planning for Whitney. Check out our video here:

If a group of guys wanted to help with this, we have the buckets and a source of bamboo.”

If there are folks who are interested in assisting with deploying the fish attractors, they can contact me at armadilla@whitney-lake.com or contact Mr. Tibbs directly at John.Tibbs@tpwd.state.tx.us . I think those same crappie fish attractors will work for black bass just like they will for the crappie.

I am not sure what all this tells us.. maybe something, probably nothing…  But, then again maybe we should be fishing deeper…   I donno!  I just need a few more 9 1/2 pounders like this one… but, wishing doesn’t cut it.. have to get out there and keep a lure in the water.