The Boss sings a song about “Its My Lazy Day”… I think she said it was an old Gene Autry…   It has a line in it that says something to the effect “I coulda gone fishing, but it’s a mighty long way”….   Well, we went fishing even if it was a mighty long way and it was a lazy day…

That was Buck on the harmonica.. He is a famous Whitney Lake fishing guide…. retired.

Daybreak at the farm…

A glorious sunrise.  Looked like it was going to be a great day.   I rousted The Boss…  well, I gently woke her and she got the biscuits and sausage going while I gathered up the stuff to take with us and got the boat and trailer ready to go.

By the way, I want to put in a good word for Discount Tire.  I have bought a number of sets of tires there and always get the full warranty.  Man has that paid off.  On Friday, I checked the wheel bearings on the trailer and while I had it up, noted that one of the tires had some bumps and lumps on it.   Took it off and down to Discount and they replaced it for $15.  And they did it “right quick” as we say in Texas.  I have been purchasing tires from Discount for many, many years… this was the 3rd trailer tire they have replaced and they have replaced others on my pickups.   Just a really good deal and great folks at the Burleson store.

Anyway, we got our stuff together and headed on down to the lake, though we didn’t get there until nearly 9 a.m.   There were three other rigs on the ramp when we arrived. 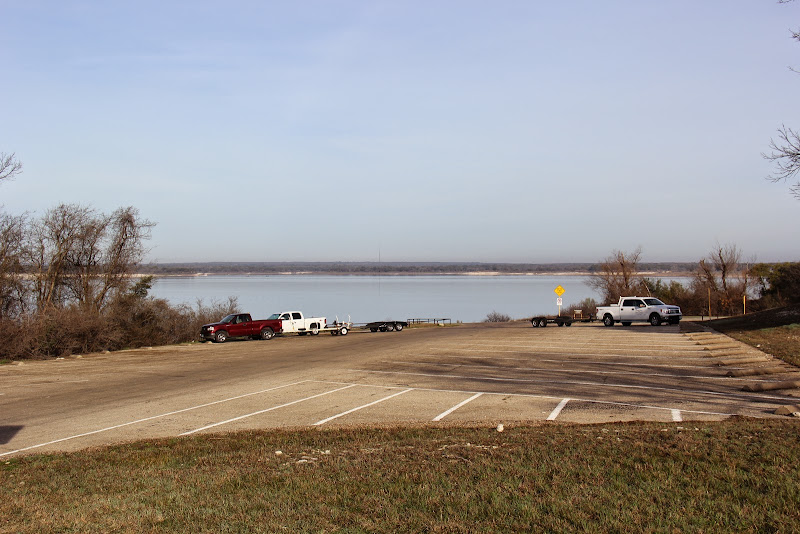 But out in the distance, we could see four boats fishing in the mouth of Cedron Creek.

But, we were not in that big of hurry anyway… After all, it was a lazy day.  So lazy, even the pelicans were resting…. 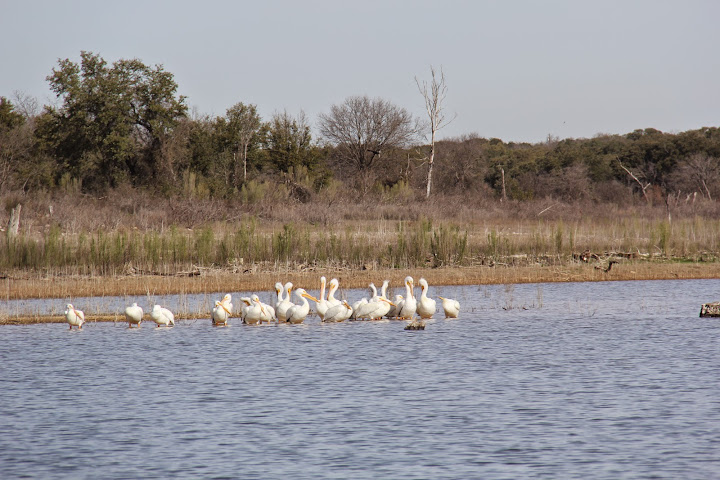 By 9:30, it was starting to look like The Boss was not in a lazy day mood.  She put 2 bass in the boat right off.  The first was a 16 incher that went about a pound and a half. 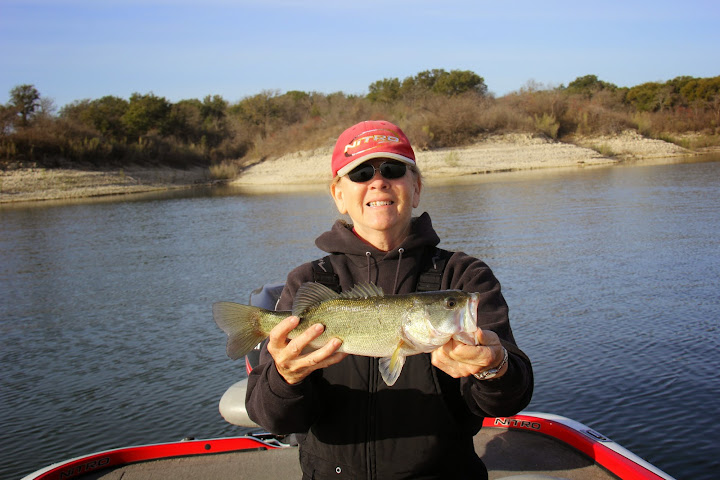 The second was a non-keeper.  But, it was a fish and since we fished with Lindy Roberts on Lake Ray Roberts many years ago we “count” every fish, just like he did. 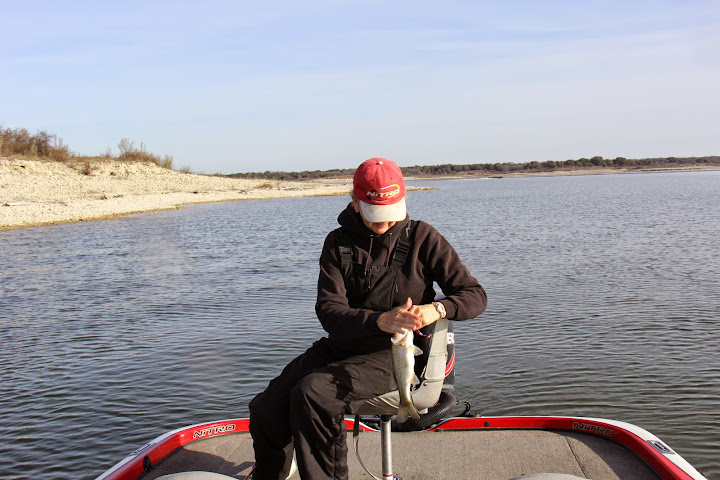 Popping the hook out…

I was beginning to get worried as she kept reminding me that she had two, and it was soon 3 (but that one was a short fish too).

Finally, I boated a fish. 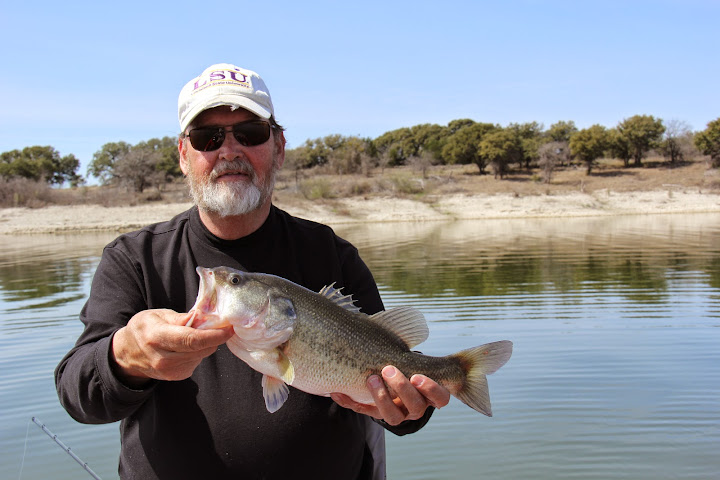 I had big fish of the day with a 2 1/2 pounder.   And fortunately, I managed to find two more to go with it, the bad news was that they were short fish.  So we ended the day with 6 fish, but only two keepers.

I spent the first hour pitching a jig.  I was determined that I was going to catch a fish on a jig, but after The Boss put 3 fish in the boat with a T-Rig, I gave up the jig and started fishing the same thing she was fishing…  no point in just getting beat to a pulp.

We did see some gulls working around the lake.  This bunch was working near the shore line.

They are a little hard to see in the photo, but there were a number in working mode.   We didn’t find any fish near there when we got over there.

We noted there were a couple of guide boats working in the Cedron Creek area.. This one is Real Deal Guide Service. 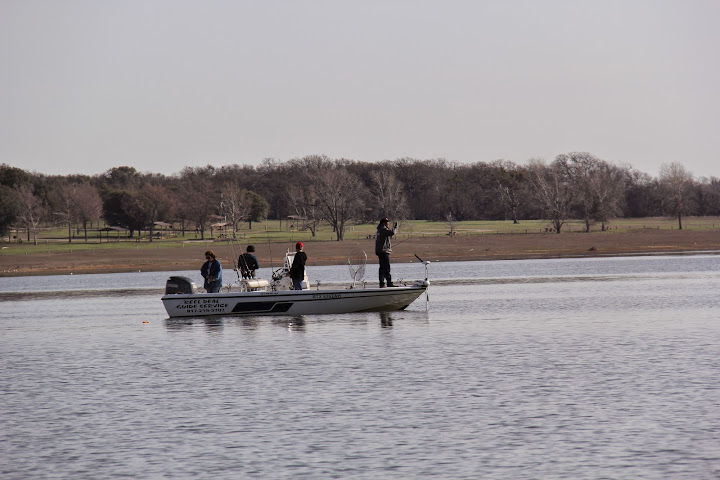 He was thumping the boat a lot, but we never saw them put any fish in the boat..  but then again, we weren’t really watching that closely.

All in all it was a great day and we enjoyed most every minute.   We fished from 9 a.m. until 4 p.m.; seven hours.   The weather was great… everything was great.  Here are the stats for the day:

The ramp remains in good shape, though the center lane is best.

At the ramp, we saw Don Lewis putting in his boat.  We didn’t stop to visit, The Boss and I were worn out from our all day fishing… even if it had been a lazy day, being on the lake for 7 hours wears us old folks out.  We speculated that Don was going out after some late afternoon sand bass.  What we didn’t understand was the other vehicle on the ramp.  We had spotted it even before we started across the lake.  It was sitting with a trailer in the water.  It was still in the water when we finally got loaded up and left.  Apparently some old fellow was new to boating.  He had backed his rig down got in his boat and was just motoring around the lake while the truck and trailer sat on the ramp.   McCown is pretty much a “one holer” at this point, though we were able to get in and out on the bridge side of the ramp without too much difficulty…   It is just strange, that someone would go off and leave their truck and trailer on the ramp…  Then dork around at the ramp while folks were waiting to load their boat.   The Boss told me I didn’t have enough patience.  I was just tired and was ready to get off the water….  I wanted to get on home and rest.