We were suffering from a major case of cabin fever yesterday…  the number 2 son had called on Friday and we all decided it might be a great day to go the lake Saturday…..  no hurry to get down as it was pretty nippy early… around 30° at 8 a.m.  We elected to get a late morning start… say 11 or so.

We headed down to McCown Valley Park around 9 a.m.. we got anxious and having noted that it was supposed to be sunny and around 50° by 10…    On the way down, we noted several bunches of cows feeding.  The Boss even broke out the camera and got a few pictures of some of them caught in the act…  we thought we would document the “cows are feeding theory.” 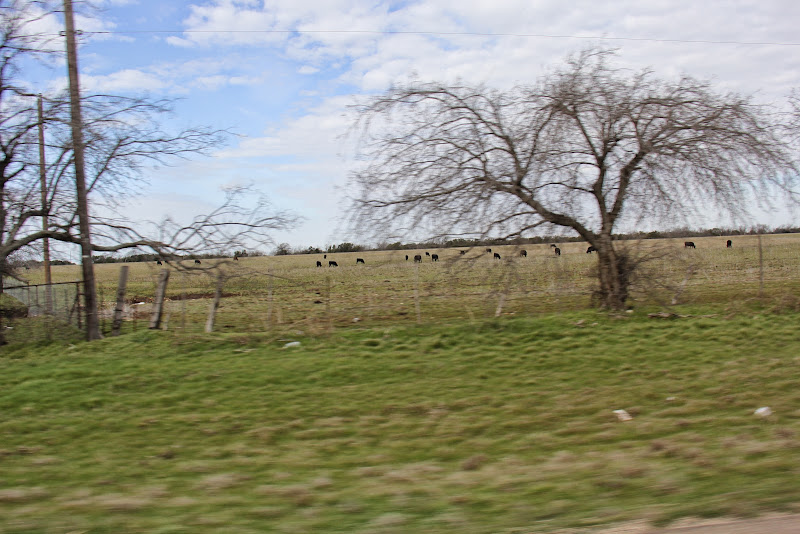 We were pretty excited… the cows feeding, some blue skies, and temperatures forecast in the upper 50s.   Not to mention a day on the lake with the son….  We hit the McCown Valley Park gate at 10 a.m.

Our first clue that the day “might” not be so good came at the gate at McCown….  The gatekeeper said she couldn’t let us launch there…  Huh?  This was a surprise for sure.. the first thought that some issue had come up with the ramp.   But no, she said there were so many folks down there, that there was no place to park.   We had forgotten to check out the calendar…  A quick check on the iPhone of our Whitney Lake Online calender and we knew it was the Farm Bureau South 40 Trail Tournament that had been rescheduled from February when the weather had been rough.   Well, that was OK…  we could find another place to launch or fish.   We did want to ride down to the ramp and use the rest room and check out the crowd….  right after we renewed our Annual Day Pass to the Federal Parks…  for us old folks, that translated to $15 for another year of boat launches at any Corps Park where they charge a launch fee.    That business being taken care of, we headed off down the the restroom at the ramp…    And there were some folks down at the ramp… well, not folks, but their trucks and trailers.. here are a couple of the photos from the ramp. 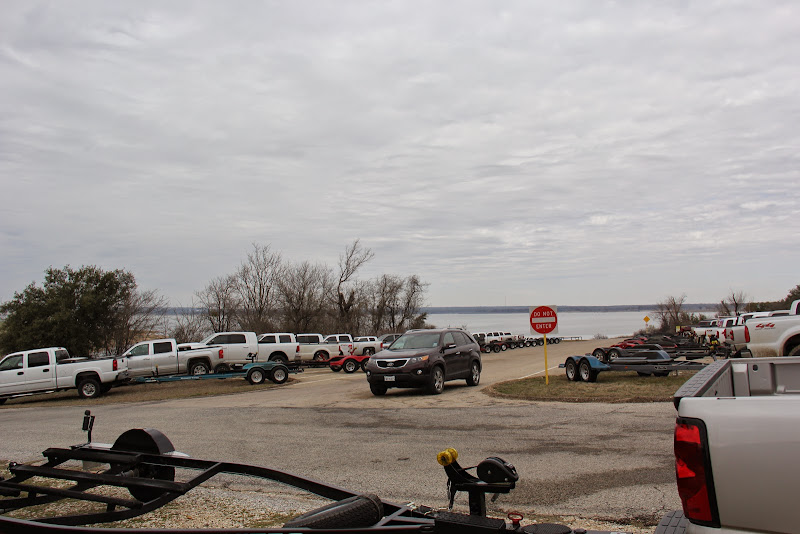 And so was the upper 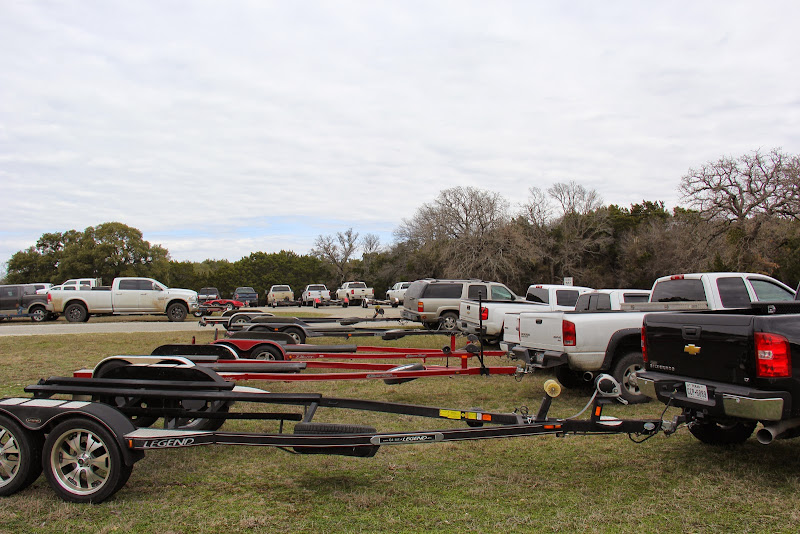 And, there were a bunch on the grass…

There was a gate keeper on guard at the ramp to ensure that no one else slipped in there…  He was not happy with the folks who had parked on the grass..  He had called a Park Ranger to take care of meting out punishment to the grass parkers..  He did let us take a  couple of photos and get our personal business done in the rest room, but there was definitely to be no more launching of boats and parking on the grass.  He said that he had had to get up at 5 a.m. to open the gates to let the tournament guys in.  That was apparently enough to start his day off on the wrong side of the gate….    We told him it was fine with us..  we had wanted to check out Aquilla anyway.

Here were the stats at launch time:

There was another bass fishermen there launching a nice rig.   He spent some time at the dock rigging up several rods…  We noticed one was decorated with an Alabama rig…  hard to hide that one.

We fished some lipless crank bait, but mostly Texas rigged worms.    We started at the bridge on the east fork fishing the rip-rap and then the posts.  Nothing.   We moved to the dam area and fished a shallow flat near one of the channels cut in the lake bottom, 2 to 4 feet in the flat and 24 feet in the channel… Nothing.  We moved up to some of the rocky points on the west side of the lake.  The Boss had one “grab and run” but she missed it.  That turned out to be our only bite.  We fished more rocky points on the main lake, some of the rocks on Snake Island, standing trees near Snake Island and also the hump out in front of Snake Island.  We saw a number of other boats fishing the timber behind Snake Island… my guess is that they were pitching the trees in the channel.   There were a number of gulls working in the area behind Snake Island, but you could not get to them in a timely manner due to all the stumps and tree tops there, but it was obvious there were some shad working on the top of the water as the birds were diving.  There was nothing moving out on the main lake to speak of.. There were a lot of pelicans resting on and around the lake, but they did not appear to be feeding.  There were several flocks of geese headed north…

The Dairy Hill ramp is in great shape.

And the floating boat dock is useable.

We may not have caught any fish, but we had a great time on the lake.