The Boss and I had studied the weather forecasts….  Monday was rain..  Tuesday was possible rain…  Wednesday looked to be the fishing day this week, then it supposedly starts raining again…  So much rain and so little time in between…  I need to mow or pretty soon, I will have to cut the grass and bale it.   But, it is spring time..  fishing is good and catching is easy.   I will figure the mowing out later… maybe summer time will just show up and the grass will die like it always does in July.

I was up at 6:30 checking the weather…  just in case.  Old Evan Andrews on Fox 4 said no rain today, it had moved out.  I double checked the Internet…  yep, cloudy now supposed to be partly cloudy by 9 a.m..   The Boss was still snoozing…  But, I put the coffee pot on and rousted her out…   We dressed, fed the dogs, ate some cinnamon rolls and hit the road.   As we were leaving Cleburne, she noticed I was getting in the turn lane to Aquilla.   “I thought we were going to Whitney this time.”   “Well,” I said, it man be a little to windy for Whitney.”   Actually, I was thinking of those last two or three big ones that had got away at Aquilla…  I knew right where those bushes and grass clumps were.

The ride across the lake was a little rough.  It was near white caps down near the dam, and very cool.   The wind was putting the old chill factor into the temperature.  Not to mention that the spray was adding some dampness too.

By 9 a.m. we were working the shore line by the dam with crank baits and top water lures.  Nothing.  So we moved on.

At 9:30, I got the long awaited tap-tap next to a stump in shallow water.  It was a good fish….  That’s about all I can tell you.. The Boss got a glimpse of it just before it came un-buttoned.  Pretty disgusting… another good fish lost before I could get it to the boat.   I am going to have to take some hook setting lessons.  I understood the fish getting off the KVD crank bait.. small hooks and all.. But this one was on a T-Rigged worm with a 5.0 hook…  Maybe it just had a tough upper lip…  At any rate I was pretty irate about losing another one.  I am not getting any younger…  I want my 10 plus pretty soon.

An hour or so later, I boated my first fish… 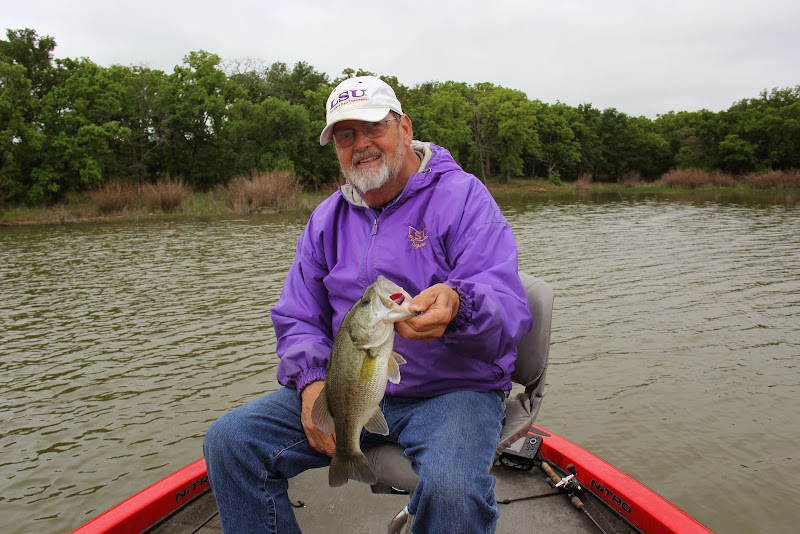 That made me feel a little better but not a whole lot better.

Then there was this…. 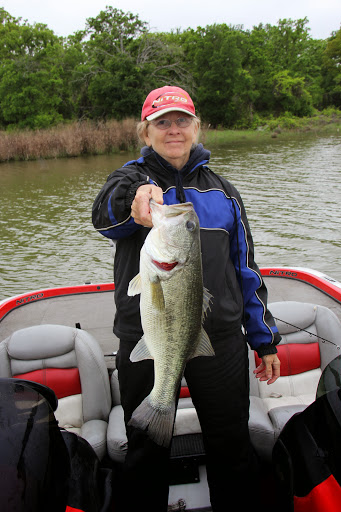 Not only was it way bigger than mine, but The Boss had caught it out of the same bush I caught mine out of .. just minutes after I got mine in the boat. And on the exact same kind of T-Rigged Zoom worm.   I guess I am just not living right.  Or as my Dad would say, “You must not be holding your mouth right.”   I donno.

And, to top that off, The Boss boated another one shortly there after.  She said “If you would learn to set the hook, we could get a mess of fish.”  Some days she really likes to rub it in.

We only fished until noon today.. we got that blue grass stuff going on tonight and she has to pick and sing.  We headed back up the road to the house and a nap.

Tomorrow is another day.. According to the weather guessers, it is supposed to be sunny and relatively low winds.  Maybe the grass can wait. 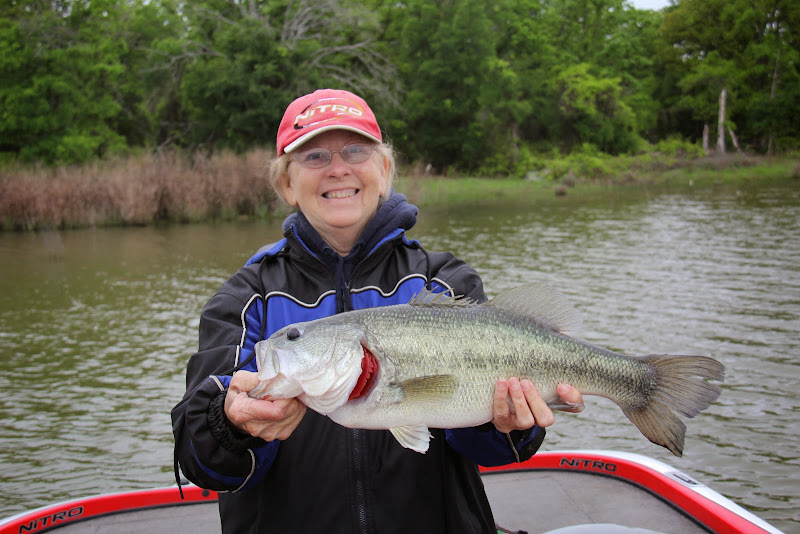