McCown Valley Park remains closed.   I believe that some of the Corps ramps and parks are open, but not sure which ones.  We did drive by McCown today and the “Temporarily Closed” sign was up at the gate.  I saw  on the Texas Fishing Forum that Media Bass I-35 Teams was going to have a tournament launching from the Day Use ramp at the Lofer’s Bend Park on July 26th (next Sunday).  It is likely that ramp is open now, or it will be by next weekend.  Other parks and ramps are also likely open, but I don’t have any first hand knowledge of those openings.

The Boss and I did go to Aquilla this morning.   We were up before 5 a.m. and were quickly on the way to the lake.  We were there by 6:30 a.m. and just beat sun-up on the lake.  It has been almost a month since we have been fishing.

The stats this morning were:

We fished several spots and came up with zero in the boat.  I did hang a fair fish on a 1.5 square bill, but he jumped and threw the lure.  Before 9 a.m. that was the only sure bite we had.

At a little after 9 though, I boated the first fish…  about a 2 1/2 pounder.  The camera got off setting so the pictures are black and white…. 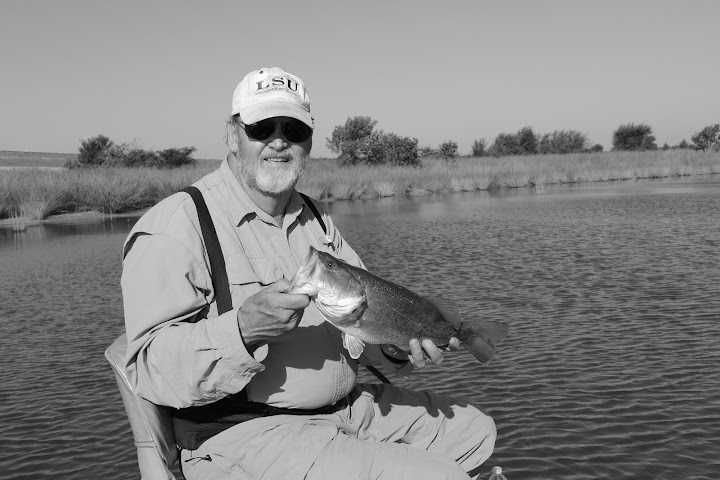 The second fish came from almost the same spot just a few minutes later. It was about a pound a half. 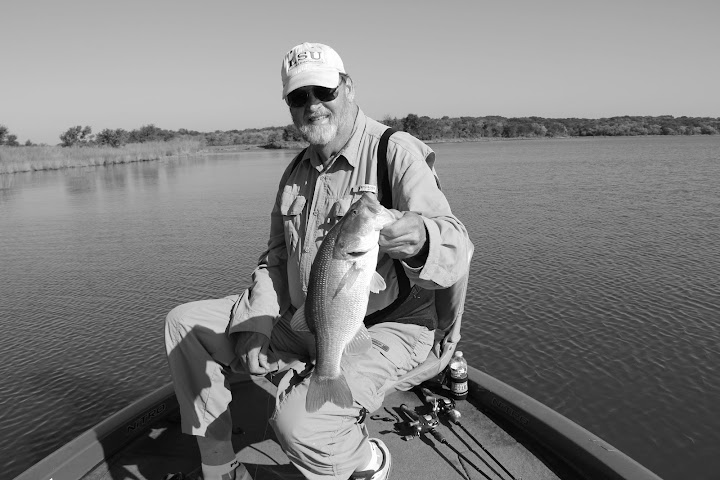 I caught a third one as well, but it was only 13 inches.

All three were caught in the same location between 9 a.m. and 9:30 a.m.   We had a number of bites, but the fish weren’t always aggressive… the three I caught really hammered the worm, the other bites were barely preceptable.    The Boss and I both had two or there of what we call “grab and runs” where the fish picks it up and takes off immediately.. usually we don’t get the hook set on those.

We fished top water early, some crank bait (1.5 square bills) and then worm.  We did not see any shad working which is why the top water lures likely didn’t produce.  The fish I caught were on a worm.

I visited briefly with a fellow on the ramp just as we were launching.  He said he had been catching some whites and had caught a bass that was 17″ long,  under them yesterday.   He said he was having pretty good luck with the whites, but didn’t keep the black.  He also wanted to know where the heck we had been.

We also saw this couple fishing the same area we were.  I don’t know if they caught any fish or not.  But they had a great looking rig. 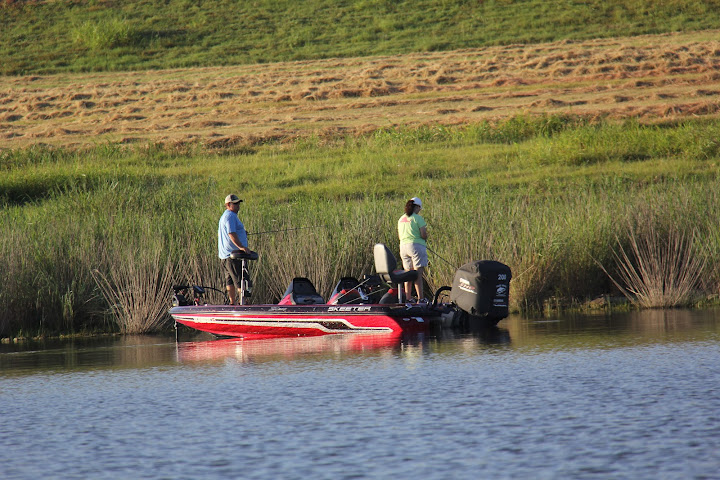 By 10 a.m. it was nearly 90° out and we were getting warm.. and the wind was picking up a bit so we headed to the house (though we did cruise by McCown on the way home). I forgot to put the sun screen up in the windshield of the pickup and it was 125° in there when I got in.

The Dairy Hill ramp is in great shape. No issues. The rest rooms were open. And according to The Boss they were freshly cleaned and actually didn’t smell bad.  She said “smelled nice,” but I can’t go that far.

A 10:30 when we got back to the ramp there were 9 rigs on the ramp besides ours.  We saw a number of folks who were crappie fishing under the bridge and a several others who were obviously white / sand bass fishing.   Pretty good for a Monday.