We hit the lake this morning… it was a great day out there.  Got to Lofers Bend East just about 7 am…. had a trailer light issue on the way down and had to stop and fix that… you know how that is, a boat is nothing but a fiberglass hole in the lake that you throw money in….  But, we got it patched up and made on down without too much delay.  Didn’t get any tickets.

Lofers Bend East is a 3 lane ramp and all the lanes look good.  The Corps did a great job getting that ramp back into shape.  A few weeks ago, it had been covered with grapefruit size or larger rocks, but the Corps got it all cleaned off and there are no issues loading or unloading.  The water is deep there.  The lake is 14 1/2 feet low.  But, another section of concrete for the ramp is visible so, I am sure that launching will continue to be great there.  We want to note that Harbor Master was also open.   And probably Juniper Cove is as well though we haven’t been up there.  I heard from two different sources that McCown may as well be closed.  Not sure about Walling Bend on Rocky Creek, I would guess it is marginal.

Headed up the lake, we checked out what we had thought was probably stumps on a hump that we had seen last week just north of King Creek.  These stickups were out near the middle of the lake.  We fished there for a bit and checked them out.  It turns out they were tree tops in 35 feet of water.  There were lots of fish holding around the trees, but we couldn’t get bit.  Actually, there were at least two tree tops there sticking out of the water in that location.  As we headed on up the lake, toward Bee Cove, we saw more of these tree tops, some marked with white jugs.  The deal is that this is open water where folks don’t generally expect to encounter stickups.   Also, out further in the lake toward McCown Valley, the lake shallows up quite a bit.  We got out of the river channel and ran into some 9 foot water pretty quickly.  Disconcerting to me …. I guess I am just an old stick in the mud and don’t like the thrill of knowing that I might be running over tree tops or humps out in the middle of the lake… and there are some humps marked on the maps.  We did give the tree tops a good once over and it appeared this wood is pretty sturdy… hit it and you will know it.

Here are a couple of photos: 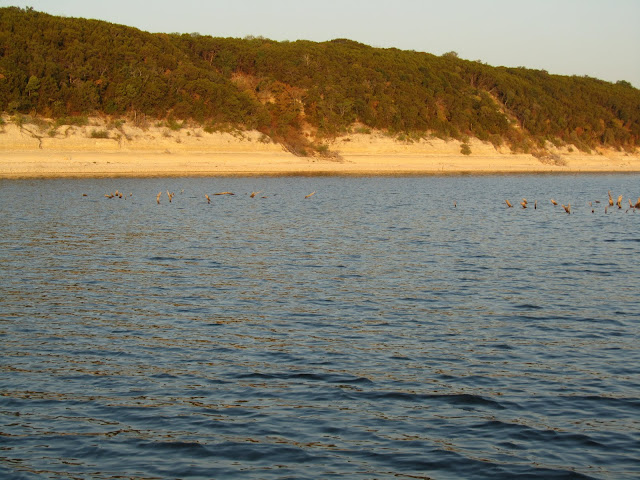 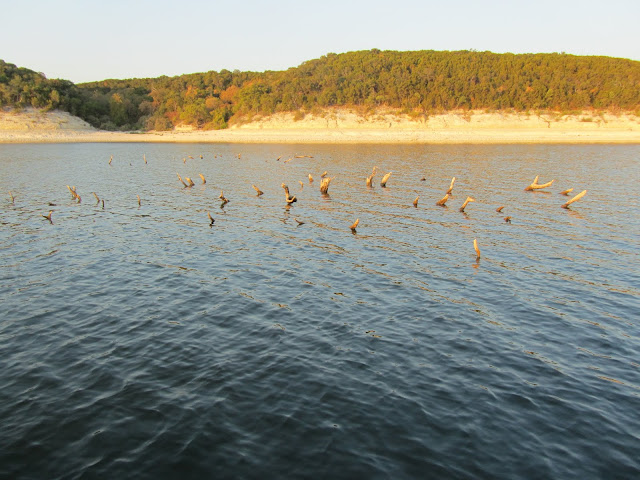 As you can see, these tree tops are a good distance from the shore, maybe a 1/4 mile or more.  This is pretty scary stuff.  If there is any chop on the water, a person may or may not see these stickups.  You also don’t know about what you can’t see.  Who knows how many more there may be like this out there just under the surface.  The odds of finding something are much better than hitting the Texas Lottery.

Fishing was great this morning.  Even though we got a late start, the action was good.  The first strike came on a Zara Spook off a rocky point…  It was one of those where the fish just sucked it under…. It was a good fish, 3 to 4 pounds, maybe better… fought well… got it to the boat and it saw the net, jumped over it and threw the lure….  guess I pressured it too much.   Anyway, it was a great start.. the next fish was a 4 1/2 pounder, then a 4, then a 2, then a 3 1/2, then a 3…. After the first few minutes we turned to T-Rigs and C-Rigs…  most came on those with larger worms. 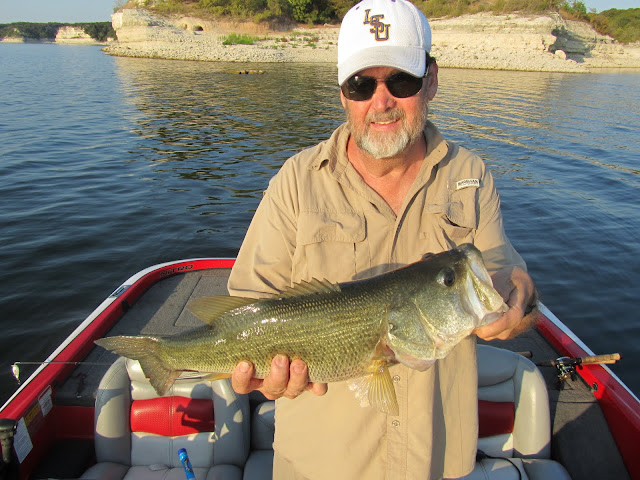 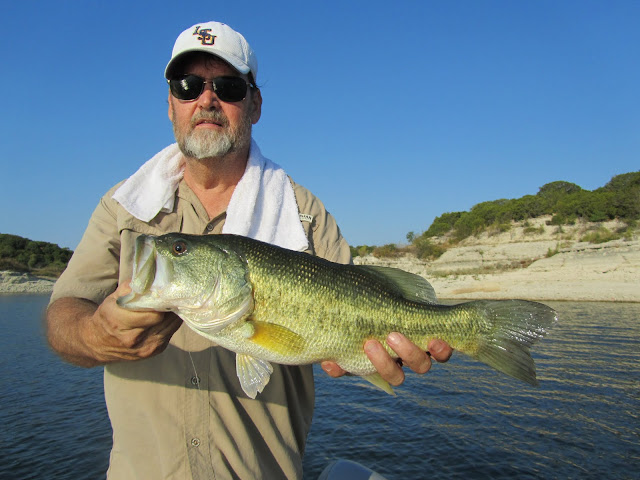 On the way back we saw a guy boat a very nice striper, probably a 6 to 8 lb fish up on the north side of the island (or what used to be an island) in the river channel.  Very nice fish.  He wasn’t quiting.

All in all, it was a great day….  lots of tap-taps and hook setting going on…..  Winds were light and got lighter… easy worm fishing…

So, if you have the time, Whitney Lake is in great shape… get out there and wet a hook.