Theres was little wind today, likely 2 to 3 mph.  Yesterday morning we had clouds… today it was nothing but those old Willie Nelson “Blue Skies” smiling at us… lots of sunshine.

The lake is now down another couple of inches to 14 feet 8 inches low…. dropped about 2 inches since Monday.  The water at the lower end of the lake remains clear.  Water mid-lake is stained to murky.  I am not any kind of expert on lakes and such, but I am wondering if the lake is not “turning over” near the mid lake area.  It is just dingy water up there.  The water temp this morning was significantly warmer than yesterday’s 82 degrees at launch.  Today it was back up to 88 degrees at launch and by 9 am was in the low 90s.

The ramp at Lofers Bend East continues to be excellent.  Three boats launched from there this morning.

We went directly to the mid lake area to fish.  It was a slow go today.  We might have got 6 bites between us, and the bites were really, light… like they may have been bream or white bass.   Just very soft.  We did not catch a fish in the two and half hours we were there.

Even the fish finders were scarce.  This one couldn’t even find the water… he was up there pickin the ticks off of himself.

On the run back, we tried to stay in the river channel and looped a bit closer to King Creek than we usually do.  We found another set of hazzards to watch out for.  This tree top is south and east of the mouth of King Creek… out in the lake. 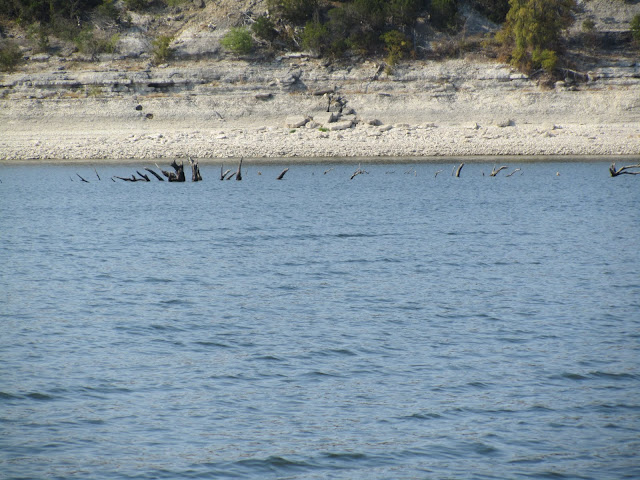 We did see a couple of striper boats over near Bee Bluffs.  Just guessing as to their location, they looked to be fishing the humps.  We were never close enough to know much of anything about them other than they were boats and fishing.

Based upon what we found the last couple of days, I would suggest staying on the south end of the lake if you are looking for bass.  We did find fish mid-lake on Monday and caught a very nice stringer and a couple of really decent fish.  But we didn’t get bit in any of those same places today and we fished several other of our favorite spots and found nothing.  We did continue to mark fish on the edge of deep drop-off near underwater flats.  And, this was where we got those “lite” bites.. but nothing that we could do to verify they were bass or even fish… could have been turtles for all I know.

I will say this.  If you want to scout the lake, now is the time.  There are just a lot of places out of the water, as in high and dry, that are normally fished.  you can photograph those spots to your hearts content.  And you can mark those open water humps for later on when the water comes back up.