Man was it foggy this morning…. got up early and went out to hook up the boat…. couldn’t find the garage.  It was so foggy, my dogs couldn’t tell who I was and were barking to beat the band.  It was absolutely ZERO visibility.  Went back in and had more coffee, ate a good breakfast and read the paper.  At 7:30 the sun had things a little lighter, but it was still very foggy, but we hit the road to the lake anyway.  There was some seriously patchy fog on the way down.  But we took our time and got there without issue.

We did notice that in a place or two where the fog had cleared that the cows were feeding…   was really wishing we had gone on earlier.

The ramp at Lofers Bend East continues to be good.  Have no idea about any others.

There were 3 boats already in the water and one was putting in the at the same time we were.  There was no telling where the other 3 boats were.  The guys putting in with us were cat fishing and going to the other side of the lake by the State Park.  I don’t think they had a GPS.  I asked how they were planning to get across..  They just pointed straight out and said we are going that way.  I have tried that in the past… both times I got lost.

We eased down the bank and did some top water fishing.    I wasn’t venturing away from the bank.   And that was a good thing.   We found some active bass. 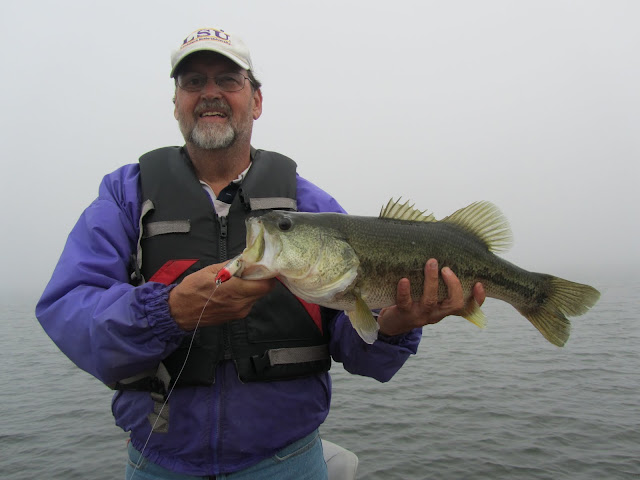 I think the bank was behind me, you just can’t see it.

This is a 4 pounder that the Boss picked up on a worm following some missed top water strikes off a point. 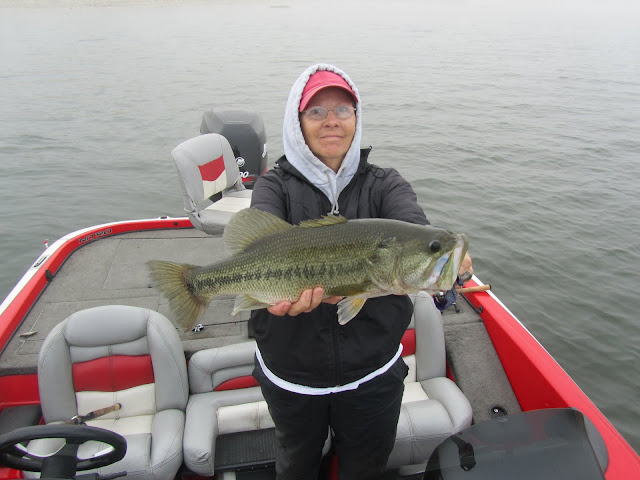 We actually had a good day, we caught fish on top water, crank bait and worm.  This 3 pounder came on a crank bait, my usual 4 to 6 running square billed. 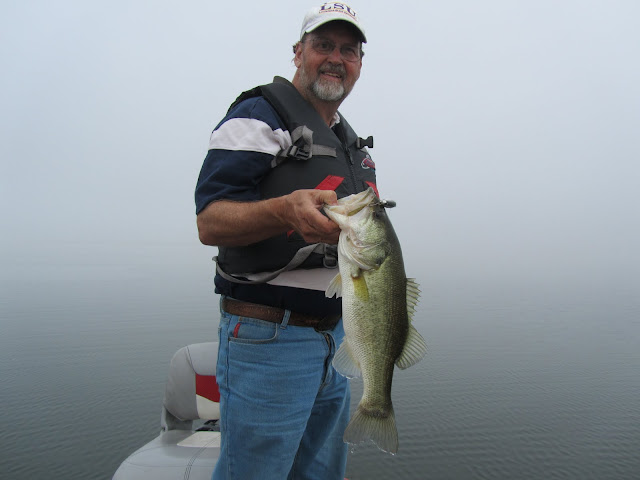 The Boss had 4 fish and I had 2.   A decent day.   We just had to feel our way around.  The good news was that we didn’t get sunburned.

We didn’t get on the water until 8:30 a.m.   I think if we had been an hour earlier we would have boated some really good fish.  We had a number of strikes we missed on top water; some of them were just huge.  At times they would just slap the lure and knock it 2 or 3 feet into the air, then come back and slap it again.  Very frustrating that we didn’t get more hook-ups.

The fog didn’t lift until after 11 a.m.   and even then it was still a situation of low visibility.   Once the fog burned off about 12 or 12:30 p.m., it became pretty hot.  The wind dropped to nothing.   We didn’t stay long after that.  Actually, we didn’t catch any fish after the fog lifted.

I am betting that Sunday (yesterday was a killer day).  Conditions were perfect.  I wish would could have made it down then too.