We started late today….  3 p.m., way past our normal quitting time.  But, we had stuff we had to take care of in town this morning… and what a beautiful morning it was… sorry we missed it.

The water is a bit “murky” almost has a coffee color to it in places.  It is certainly not as clear as it has been on the lower end of the lake and that is where we fished.  The air temp was about 75 or so when we put in.  The water temp was 67 degrees and it never warmed up over 70.   According to The Texas Water Development Board’s web page, Whitney is 15 feet 10 1/2 inches low. The wind today was light, 3 to 4 mph. from the South. There was just a ripple on the water.

The ramp at Lofers Bend East was still usable.  To launch, you have to get the trailer wheels, both axles off the end of the ramp, but the bottom is rocky and there is no problem with using the ramp.  I checked with the gate keeper just to make sure.   I also saw two vehicles on the Walling Bend Park Ramp on Rocky Creek, so I am guessing that folks are still launching there, though I have not been over to look at it closely.  I have heard that Harbor Master Marina has closed its ramp, but haven’t confirmed that.  And, as far as I know, Juniper Cove Marina is still open and probably the Red Bluff ramp on Steele creek because it was open even when the lake was down over 16 feet before the rains last month, but my guess is that you would be launching off the lake bottom just like at Lofers Bend East.

We only fished 2 1/2 hours today, we quit at 5:30 p.m, but that may have been a mistake.  We had several strikes shortly before we decided to leave.  In fact, the only fish we boated was caught at around 5 p.m., but I had been up since early this morning and it was a long day for and old guy.  The Boss was ready to fish on.

Rocky points. The fish we found were shallow, in less than 3 feet of water on rocky points. The rocks were the key.. .fish were hanging by rocks. If you could see a rock in the water and pull a lure by it, that produced our strikes. 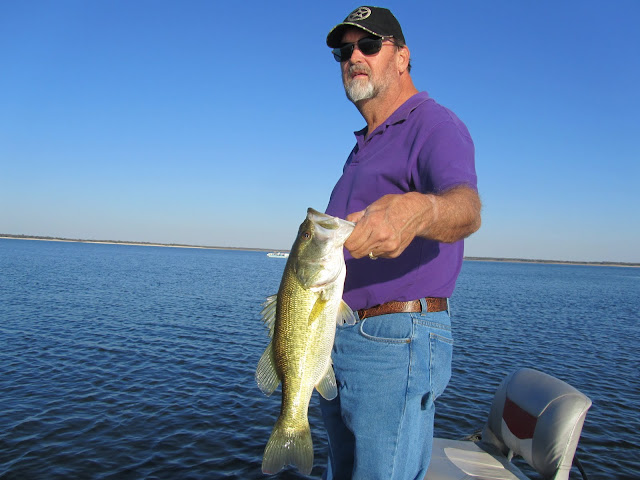 That’s about a 2 pounder.  It was caught on a top water lure… finally.  I had missed 4 or 5 others two of which were good fish.  For some reason, the hooks weren’t getting set, because I was able to pull them for a ways, then they would come un-buckled.   I would guess that I had 3 or 4 really good strikes on top water and then I lost one, a keeper but not large, on a swim bait.  The Boss only had two taps on a worm, but they didn’t take it.  The top water action was good around the rocks in shallow water.  The swim bait fish took the lure on a deep ledge drop off, but it jumped and threw the lure, probably not a good hook set.  One of the top water fish was a good one, a huge strike, again, just didn’t get a good hook set….  operator problems with the fishing tackle.  We should have caught at least 4 fish.

It was a beautiful afternoon on the lake.

We had a few issues that I need to look into before I go back out.  I am definitely going to change the hooks on my favorite top water lure… I let way to many get off today.  My Garmen depth finder and GPS is not staying on more than a few seconds before it shuts off, even when sitting still.  I don’t know whether a short is causing it or if the unit is dying on me.   I have one trailer wheel that is showing a lot of black like the rear seal may be leaking grease… definitely need to check that wheel out.  And, another brake light/turn signal has gone out.  Got to replace the bulb and seal the light with silicone.  So, I have “chores” to do in the next couple of days which are forecast to be “Breezy and Windy.”  We will not be on the water on those days anyway…..  It’s that old saying, a bass boat is nothing but a fiberglass hole in the lake that you throw money into.

I would say, fishing is still good.  If you can get down there, do it.  If you have a fishing report, send it to me and I will post it for you.