We made it back to the lake today.  It was a great day on the lake.  Not many fish, but the weather was very pleasant.

The wind was down this morning, about 4 or 5 mph when we launched at 8:30 a.m.  There was a little fog, but we had purposefully waited to give the fog time to clear before we hit the lake.  The air temp was about 47 or 48 degrees, lots of sunshine.   The water temperature was 59 degrees at launch and it didn’t heat up more than a degree or two this morning.  The water is stained, lots of silt or the like in it.

I don’t know where those folks were fishing, but it wasn’t where we went.  I wore the blue paint off a square-billed crank bait and never got a tap.  I think the Boss fished a Rattle Trap some and she had no luck on it either.    We fished some top water, and some crank bait, and lots of worms, both C-Rig and T-Rigs.  We did get some bites on the worms.  We caught 2 small fish on C-Rigs and the Boss caught another on a T-Rigs.  The bites were very light. Most of the time, we would just see the line moving off and not feel anything.  The good news was that I didn’t get skunked today. 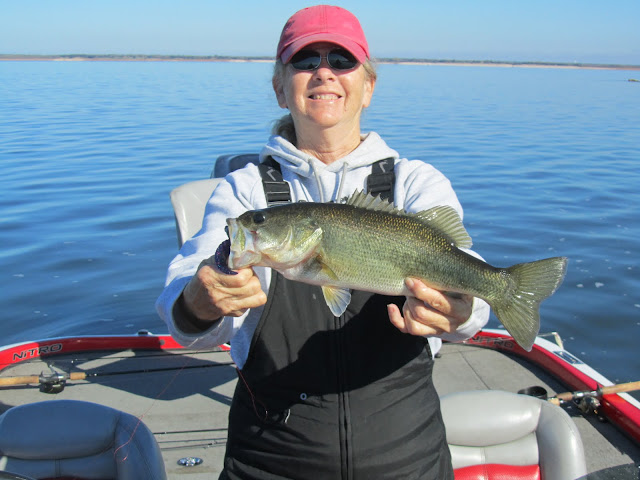 I think that was her smaller fish, and the other one was an inch or two longer… both were bigger than the one I caught.   We fished until noon, so only 2 and 1/2 hours, but it was great to be back out on the lake.

There were two rigs in the parking lot when we launched and there were 5 there when we left so some folks were out on the lake today.  We only saw one boat striper fishing, the others looked to be bass fishing.

I did get to try out my new Hummingbird depth finder and GPS.  I purchased one with the Navionics maps.  It was an HD, high resolution screen.  Quite an upgrade for us.  The guys that are using this kind of equipment are surely cutting down on their search time for fish.

The lake is down 16 feet and 2 inches.   The ramp at Lofers Bend East is still good.  In fact, it looks better than it has.  Someone, I assume its the Corps, has cleared some of the rock from the ramp and you can now see another set of slabs so it looks like the ramp may actually extend at least another 20 foot or what ever the length of the sections of concrete are.  Loading and launching is not a problem.  I would recommend sticking to the lane that the Corps has marked with blue stripes.

I also got a report from a guy who fished on Sunday about the ramp at Juniper Cove Marina.  Here it is:

The launch ramp was very long and narrow, being that the lake is so low the sides of the launch ramp are rather steep if something should happen and someone turned their trailer too far to the side. It is also part dirt, part concrete, and there were sizeable potholes that certainly shook me up when I was sitting in the boat after driving it up onto the trailer.

The launch charge there, according to the sign at the ramp, is $10.

I glanced at the Harbor Master Marina ramp this morning, and it looked as though it might be open, but can’t say that for sure.  Launch fee there is $3, like the daily Corps Parks fee.  I am hoping to get a report on the Red Bluff ramp up at Steele Creek Park after this weekend.  If so, I will pass that along.