This is what a fish finder is supposed to look like… working in the  shallows. 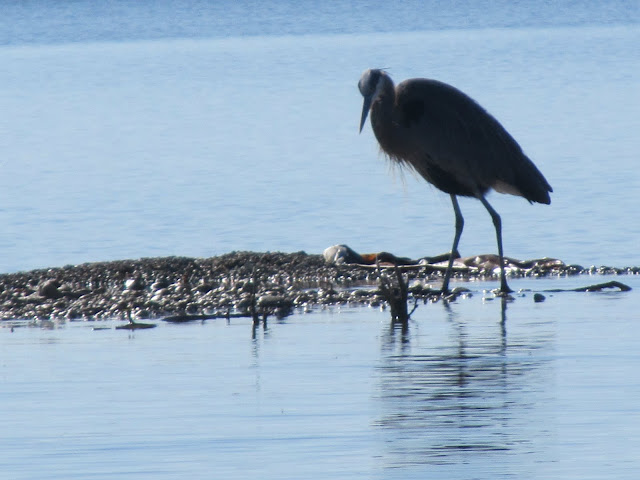 But, Wednesday and Thursday of this week, the fish finders we saw looked more like this… heads under their wings. 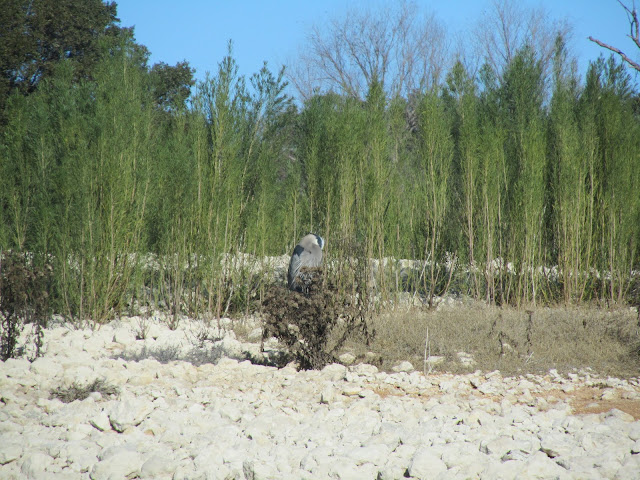 And the fish, or at least the bass, seemed to be much the same way….off snoozing some where.

We fished both Wednesday and Thursday mornings…..  that was likely a mistake as the weather warmed up in the afternoons…  The bass didn’t bite for us in the mornings and we didn’t stay.   Wednesday, we got on the lake about 9:30 a.m. and were off at 2 p.m.   On Thursday, we were on the lake at 8:30 a.m. and off at 1 p.m.

The winds came up on Wednesday about mid-day making the plastic worm fishing too tough…  just couldn’t feel anything, especially bites and most of the time, not even the bottom.   Thursday, the wind died, but we had commitments back at home so we didn’t stay though the weather was perfect…. near 70 degrees and relatively calm in the afternoon.   Both mornings when we put in, the temperature was in the low 40s.   We had and needed the heavy winter gear.  Wednesday the air warmed up to about 50 to 55. Thursday it was near 70 when we came off the lake.  We almost needed a jon boat to pull along behind to carry all the cold weather gear we shed.

The fishing was just that, “FISHING”, both days, not catching.   We got very few bites and caught no fish.  ZERO, NADDA, NUTTIN!   It was almost embarrassing.    We tried the stripers for a few minutes early both days, but couldn’t get bit there either.  There were a few birds out on the lower lake Wednesday, but not a lot, at least we didn’t see a large number of them.  Having tried the lower lake on Wednesday, we headed up lake Thursday, fishing old spots that produced for us in the past and where we have picked up a few fish recently.   But, we just couldn’t find them.  We marked very few fish and few bait fish.    We fished water that was 5 to 25 feet deep, ledges and points, primarily on the main lake, and some secondary points and creek channels.  We just could not find the fish.  But, there were more gulls working mid-lake than we saw on the lower lake.

We stuck to our winter times lures, rattle traps and big plastic worms.  If you are going anytime soon, I think you can scratch these off your list of things to try.

I will tell you that there were more folks out on the lake than usual.  Actually, Thursday looked like a 4th of July weekend….  lots of boats, and lots of boat ridding.  There were only 4 rigs on the ramp when we launched, but when we came in there were 17 rigs at Lofers Bend East.   We pulled out and another rig pulled up and thanked us for our spot close to the ramp.  We saw lots of boats from mid-lake down to the lower end.  It was apparent folks are launching at places other than just Lofers Bend.  There were just so many boats.  Most guys appeared to be hunting whites and stripers out in the middle of the lake.   At least two guide services were out there working and apparently doing some good; they cleaned some fish at the ramp.   We saw Mike Acosta’s rig on the ramp at Lofers Bend Wednesday.  Sweet boat!  If he can launch that ship from Lofers, you can put in most anything there.

The Lofers Bend East ramp is  still in good shape, though only the center lane is really usable.  That’s the way it has been for some time.  The Corps still has not put the boat dock back in the water so loading and unloading is a bit of chore.  The area around the ramp is really shallow.  I notice that most guys fishing by themselves wear boots to get in and out of their boats.  Having the Boss handle the boat for me, she picks me up on the ramp and we are able to get it done without getting any feet wet.

The water temperature was in the low 40s both mornings when we launched and warmed to the low 50s in the afternoons both days.  The mid lake area water seems clearer than the lower lake to me.  In fact, visibility was really good mid-lake.  We had a few clouds early Wednesday, but it was mostly clear blue skies both days.  You could just hear old Willie singing “Blue skies, smiling at me…. , nothing but blue skies do I see.”  The lake is about 15 and 1/2 feet low at 517.45 feet.  We have been able to launch with the lake down over 16 feet so, we have a little margin there.  If only we can keep picking up a little more rain.

If I were going again this weekend and hunting bass, I would wait until at least noon to put in.  I would look for rocks, rip-rap, and rocky humps to fish when the sun is at its hottest…  you might even throw a top-water around those rocks.  But, fish the edges too with crank baits and plastics.

Get after them… life is short and its better when you are fishing… fishing is good even when its bad.