Brrrrrrrr, cold yesterday morning.  We had our full winter gear on.   I think the air temp was around 35 degrees when we got to the ramp about 8:15 or so.  We were the second boat on the ramp.    The first boat was already out there fishing for stripers or whites.  There were some birds working the open water between the ramp and the State Park.

There was also a big crew of guys from Alabama working on the ramp, setting forms and pouring concrete for the dock side walk down the edge of the ramp, to the water’s edge.  They were a friendly bunch.  I invited them to go, but they had work to do.

The  winds were light, around 2 to 5 when we launched, but by 9:30 or 10, it was calm.  The lake looked like a mirror.  It was another one of those blue-bird skies, no clouds.  The water is stained, if not a bit murky.  If I were an expert on this stuff, I would say the lake is “turning over.”   There is little clarity in the lower lake, but it was somewhat clearer up toward mid-lake.  The water temp was about 45 degrees to start and warmed to about 50 degrees by noon.  The lake is 16 feet 3 inches low.

We fished our usual rocky points and ledges, our two favorite locations.  We fished some top water, a lot of crank bait, square bill and rattle trap, and a lot of T-rig and C-rig with varying types of worms.  I tried some chrome slabs and the Boss threw a swim bait for a while.  We did not mark any fish in our locations, but we fished them anyway on the assumption that fish might move in.  We had one bite all day.   The Boss boated this two pounder.   The color on this fish was pretty unusual compared to the fish we normally put in the boat on Whitney.  It was a very dark fish. 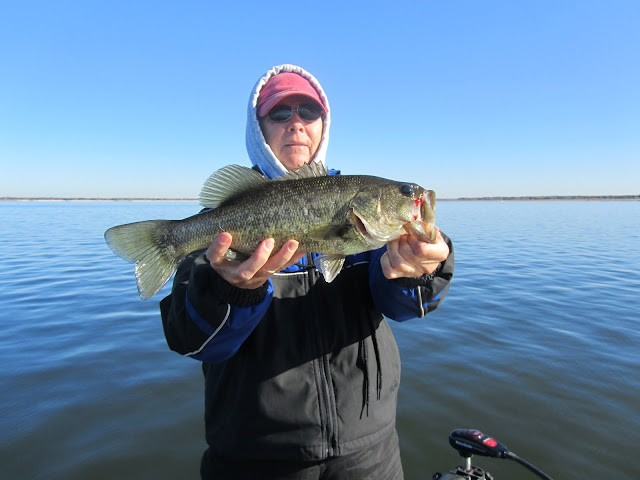 She caught this working a C-rig parallel to a ledge.  Pretty good fight for a small fish…. or maybe her drag was a bit lose…. 😉

If your wife or girl friend is missing her blue bikini bottoms, I know where they are… I pulled them up while working a square billed crank bait along a sand bar above a deep ledge.  I could see why the gal might have shed them, they were full of cockleburs.  I had to cut the hooks of the crank bait out of them… so they will be a bit air-ish if she wants to wear them again… not that they weren’t air-ish to start with….

As I told another guy who was launching when we pulled out at 12:30 p.m., all I could do is tell him where NOT to fish….  We had fished the rocks and rip-rap up toward the dam and had found no fish and even in terrible times, this usually will get 3 or 4 anyway.  He advised that two guys had just come back from only an hour and a half of fishing and told him they had caught 13 black bass on the rip-rap at the State Park…  Don’t know about that, we didn’t go over there, but did see some boats over there.

Being the beautiful day it was, there were lots of other boats on the water.   There were 8 or 10 rigs in the parking lot at the ramp when we got back about 12:30.

The Alabama crew was there, still pouring concrete, but closing in on the last of it when we returned to the ramp.  One of the guys helped with the boat when we got to the ramp and the foreman was a really friendly fellow and gave us a lot of information about fishing for crappie in northern Alabama.  We did have some discussion about LSU and Alabama (I had on my lucky LSU hat and he had his Alabama sweat shirt) probably meeting in the BCS Championship…  I thought he was a bit prejudiced… thinking Alabama might win…. well, he certainly was an optimist.

Winter time fishing is here…. opportunities to get out will be limited, but get it while you can, the big ones are there for the taking this time of year.