We were back on the water today….   It was a beautiful day.

Whitney is only down 6 feet 7 inches now.  The lake level is 526.41, normal is 533 feet.  The lake has jumped up about 10 feet.   We were able to launch at McCown again with no problem.  It is really nice to be able to launch off of a smooth concrete ramp, 3 lanes wide.  It is also nice to have a nice boat dock next to the ramp.  The gatekeeper at McCown Park advised that the Corps of Engineers had opened the ramp on Friday.   You should be able to run wide open from the dam up to Juniper Cove without a worry now… providing you stay in the normal grooves.  We saw a couple of guys doing just that this morning.  I think they must have had motorcycle helmets on the way they were flying. 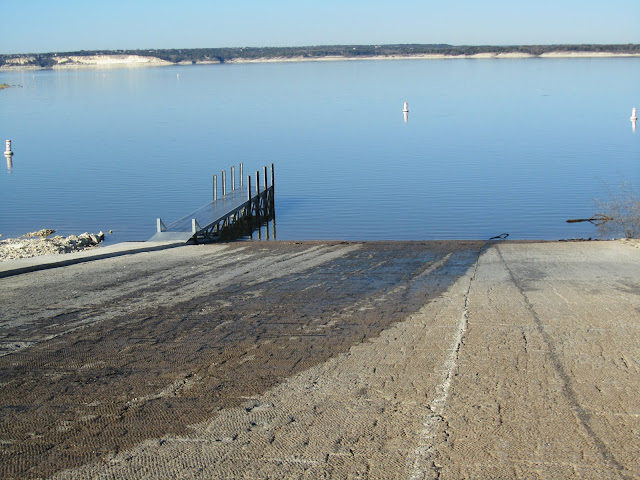 I would guess that most of the ramps on the main lake have opened back up, but don’t know for sure.  The Corps of Engineers had a crew from Alabama reworking all the ramps when the water was down.  They added the side walk to control the boat dock on all the ramps and all the ramps were cleaned off so they should be in great shape.

There is also an enormous amount of trash in the water and included in that is some substantial hazards. 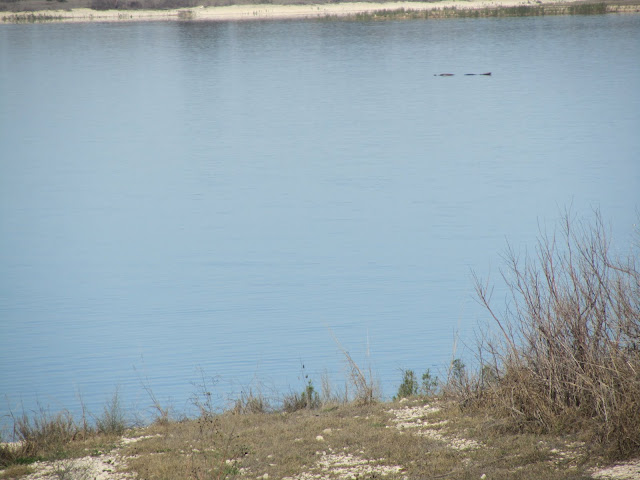 The log in the  shot above was visible from the ramp. 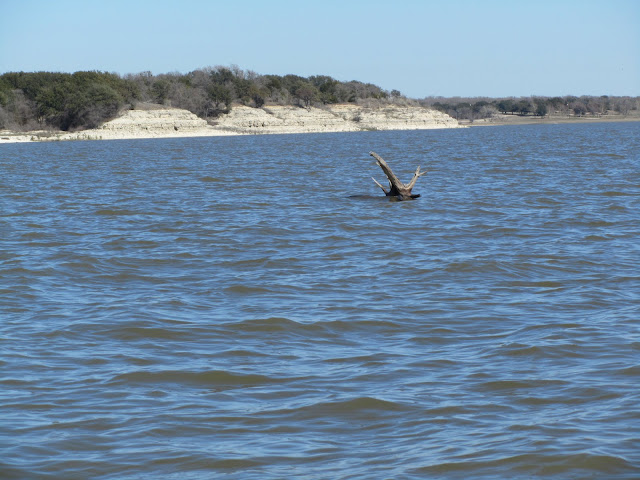 We saw this floater in the middle of the lake on the way back to the ramp.  As you can see the wind picked up a bit, but it wasn’t bad. We had our cold weather gear on and we were comfortable.

The bad thing was that we got no bites.  None, Not One, Nadda, Nuttin!  We did mark some fish suspended around balls of bait fish in the open water and some in the deeper creek channels.  We marked no fish in shallow water.   We fished T-Rigs, C-Rigs, jigs, rattle-traps, and spinner baits. The Boss even tried a swim bait and a top water popper.  Nuttin, not a hit.  We only fished the mid-lake areas where we used to catch fish: humps, ledges, sandy coves, rocky points and some stumpy flats.  Some of the scrub brush is now under water and we fished it.  As the lake clears up, there is going to be a lot of new areas that hold fish, and I am not just talking about where there used to be just dirt and rock when the lake was down…. I am talking about the weeds that are now under water.

We did see some birds, gulls, diving around the mouth of Cedron Creek, but we didn’t fish them and that activity died down about 10:30 or so.

My guess is that it will take about a week for the lake to clear some.  If it stays relatively warm, it is going to be an early bass spring.  There should be some great fishing because of all the new structure.

Usually, a day on the lake is a great rejuvenater for us.  Peaceful, away from all our troubles.  It was a bit sad today.   Our thoughts are still with Cody.

Corp of Engineers Closes Parks and Boat Ramps at Whitney, Aquilla and elswhere