We were on the lake again today…

On the way down to the lake, we noted that the cows were feeding … all along the highway.  That’s a good sign or at least that is one of the old sayings:  “When the cows are feeding, the fish are feeding.”   It just ain’t always so… or at least we didn’t find them.  The fish might have been in a different pasture or something. 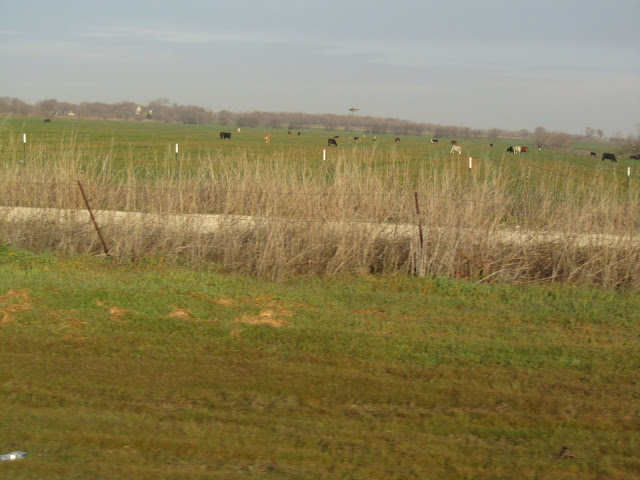 It was about 45 to 50 degrees when we launched.  The water temperature was around 48° and got up to 50° by early afternoon.  The water remains clear.  The winds were 2 to 5 most of the time we were out there and it was mostly cloudy.  We elected to wait until it warmed up some before we hit the water.  We have not been catching anything early so no point in going and freezing to death.  The Corps of Engineers web  site says the lake is down 15 feet 7 1/4 inches.  The ramp at Lofers Bend East continues to work just fine.  The Corps of Engineers has also put the boat dock back in the water though it is shallow.  We elected to get on and off at the ramp.

With the wind out of the Northeast, we elected to fish the State Park area early.    Not at bite.  I would say we fished about 3/4 of the rocky beach area, beginning at the upper end of the State Park.  The winds turned a bit more to the Northwest and it pushed us along faster than we wanted to fish so we headed on up lake.

We fished the Bee Bluff area, hitting the main lake points.  We stayed in that area until after lunch when the winds seems to get a little higher and the cloud cover got thick again as the front passed through.

The Boss boated one fish.  It was a 14 incher, but as my Dad used to say, “Some is better than none.”   She skunked me again.  I might have had one bite, but that was a big maybe.  We just had another tough day. 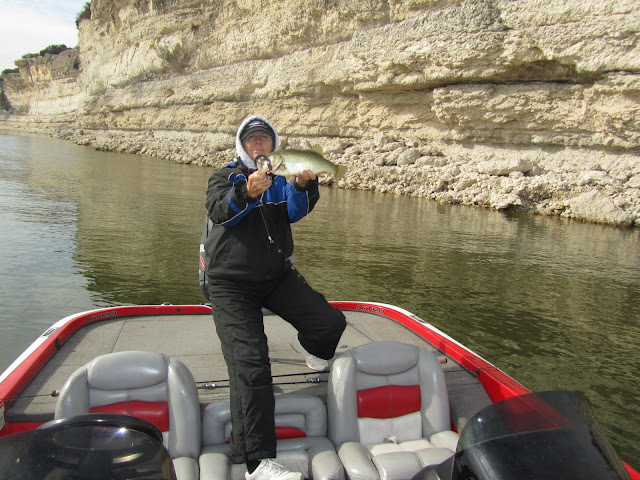 There were only 4 boats in the parking lot when we launched at 10:30 a.m. and about 8 or 10 when we pulled out at 1:30 p.m.  There were some folks fishing for stipers, but there were a fair number of folks fishing for black bass.  We saw at least 3 boats up in the McCown area that were bass fishing.  I never saw anyone boat a fish… but, then again, we weren’t too close to any of them.  I will say this, some of those guys know the lake much better than I do.  I saw at least 3 boats running down the east side of the lake between Walling Bend and McCown.  Nothing I would be doing.  Maybe they weren’t looking at their depth finders and didn’t know they were running through shallow water and stump fields.  Oh well….  not my issue and this is why I don’t care to fish weekends.

Its been basically the same story every fishing day lately.  This is just been the worst winter time year we have had in some time on Whitney.  In past years, we have had many days when we launched at McCown and fished for only 2 hours and both of us would limit and have all fish over 4 lbs … some 6s and 7s among them.  The Boss has caught a 7 plus and an 8 during the Christmas to New Years week.  But, its not happening this year.  The water is down and many of the places we used to fish are now just rock sitting out of the water.

That’s the report …  good luck to you if you are out on the lake..