Another day, another buck-two-ninety-eight….  well that’s what my Dad used to say.. of course he worked all of his life…

That was the Boss hard at work….    she left her Red Nitro hat at home and had to wear the “emergency” hat we keep in the boat just in case a hat gets blown off, or someone is not paying attention when casting and snatches off our partner’s head, or some such event… maybe like we got to old and forgetful and left our hat at home. 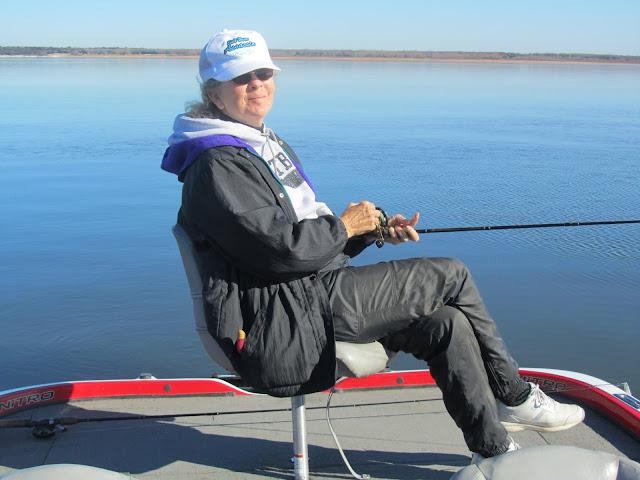 She was in a good mood today… fishing two days in a row, that puts a smile on her face.   We caught ZERO, ZIP, NADDA, NUTTIN, SQUAT yesterday….  and didn’t do much better today.  Actually, the Boss did put a Kentucky in the boat today.  But, we didn’t get any big bites like the two we had yesterday.  This little dude wasn’t much more than a minnow… but at least it was a fish. 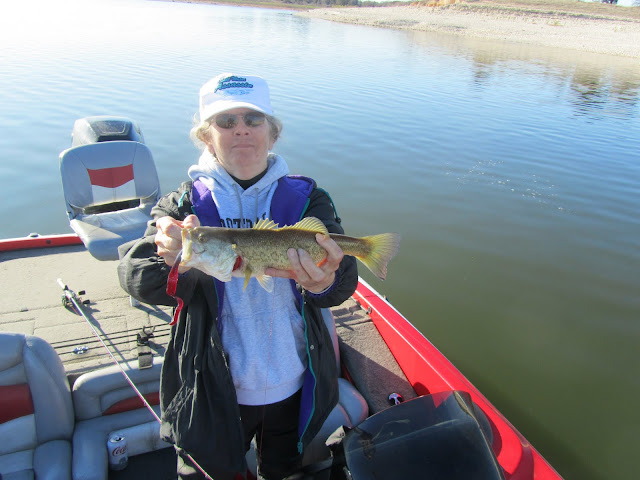 And, a fish is a fish.. it made the Boss happy.

Here is a picture of her getting ready to set the hook on another bite….. 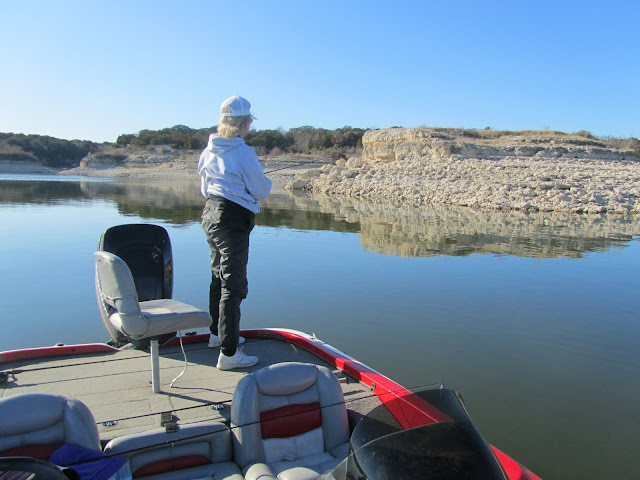 It was a swing and a miss…. but something to keep the day going for us.  We had breakfast in town this morning, read the paper and heard on the radio news that the winds were “light”…. Then even though we fished yesterday and it was a tough day, we decided the afternoon might be better than the mornings have been….  Well, it was warmer.  And, as you can see, the winds were light…. It was hard to find a little ripple on the water today. 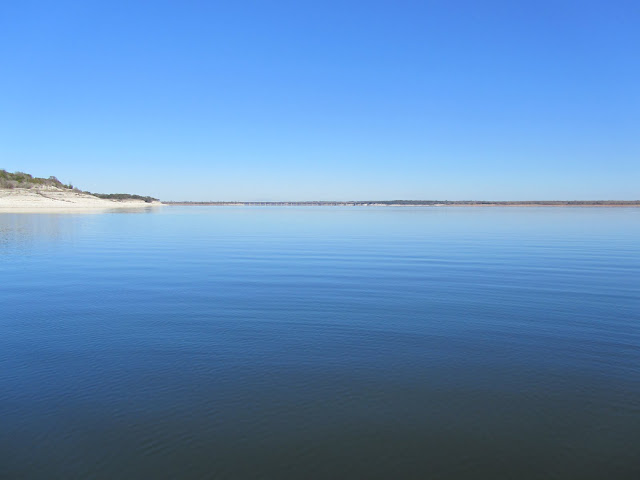 Did I tell you the winds were light.  If this were summer time, it would have been a 110° out and we would have been wrapping wet towels around our necks in order to stay out there.   But, its January and the temperature this afternoon got up around 66° to 68°.  Boy was it nice.  Even if we weren’t catching fish, at least we were fishing….. and that’s why they call it fishing… they don’t call it catching!

There were 10 or 12 rigs in the parking lot at Lofers Bend East when we got there about 12:30 p.m.  One had just gone out and another fellow was putting in.  The ramp continues to be in good shape.  But, there is just the center lane so sometimes you have to wait your turn to get in and out.  But, during the week, no one seems to be in a big hurry… just mostly us retired folks doing that Clint Black thing… “Killing Time”… but it is not killing me… it makes life fun.

The water temperature was about 46° or 47° when we put in.  I think it warmed up to around 50° or so by mid-afternoon.  We fished the lower lake at some of our favorite points.  The water was exceptionally clear with the sun on it this afternoon.  I could easily see to a depth of 5 or 6 feet, I mean see the lure down that deep and easily pick out rocks from 50 feet away.  Just amazing.  The mid-lake area was also clear, but not as clear as the lower lake.  We had had a few strikes on top-water on the top of some humps we fish the last couple of trips out.  I thought we would find fish there today with it being warm and the water clear, but no such luck.  Not a top water swipe at all today.  I didn’t get a bite… the Boss had several on Texas rigged worms, but only got the one in the boat.  We fished crank baits, swim baits, spoons, some top-water and T-rigs.   We found two places where we marked fish we thought might be bass.. they were in 25 to 30 feet of water along ledges on deep points.  We just could not get them to hit anything.

We didn’t put in any time today on the stripers.  There were some birds out there, more than we saw yesterday, but they were just sun-bathing… not diving.

We had a good day… then, about 4:30  we got a life changing call and we headed home.

I told you yesterday about the Navionics Map in my Hummingbird…. well I am still getting used to it.  On the run back to the ramp from McCown, I got a little confused.  Going up the lake, I never have a problem… but running back down the lake, everything can seem to be just backwards.. when I need to turn left, I sometimes turn right.  There is an “S” curve between Walling Bend Island and McCown…  This is where you can get into trouble… I zigged when I should have zagged, and out there in the middle of the lake… I ran into 4 feet of water…. talk about shutting down fast…. I mean it was at least a half mile to the west bank and probably a mile to the east bank… right out in the middle of the lake..  A person just cannot get out of that river channel when running on a plane… and you really have to pay attention to what you are doing.  I donno, I guess I just need more practice.  I did this same thing  last week, only it didn’t get quite this shallow….  I know that stuff out there is all rock, no sand….

So, if you are going out there… pay attention… stuff can happen.  If you are fishing this weekend… good luck.