I had a root canal this morning.. and it was very foggy…..

But, this afternoon, it was about 55 and light winds….. The Boss wanted to go fishing… what better way to spend Valentines Day???

Whitney continues to rise.  The lake is just under 5 feet low.  How great is this?  And more rain due tonight and tomorrow, maybe again this weekend.  Maybe more rain early next week!  We could get a full, normal lake level here in a month or two.  Get a big rain storm and we could have a flooded lake.

We launched around 1 p.m. today.  The water temp at the McCown ramp was 54° and the water was stained a dark tea color.  Not milky coffee, but more dark tea.  Visibility was less than 1 foot.   On the main lake, the water was in pretty good shape, not much trash, but in the creeks it was trashy and more coffee colored.   I think the rising water is the culprit in the water color.  Back in the creeks, the water temp dropped to 52°.

There were 3 rigs on the ramp when we arrived.  One was a pontoon boat that fished for whites out from the McCown Park.  Another was a guy with a bass rig that I figured for new.  He made a lot of runs around the lake; running to the backs of the creek channels and barely staying long enough to make a cast or two then taking off again.  We surmised that he had “new boat” syndrome…. at least that’s the way it seemed.  More boat ridding than fishing.. you can’t catch fish if you don’t keep your lure in the water.

We fished 4 hours today, coming off the water around 5 p.m.   We picked up two fish.  This one and a short fish.  Both were taken on a T-rig. 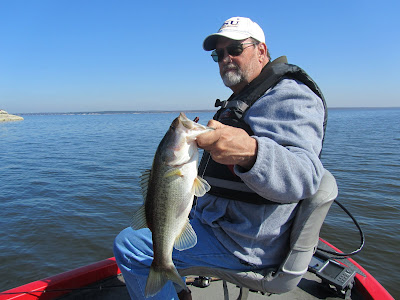 I only fished a T-rig with a 10 1/2 inch Zoom Red Shad.  The Boss fished a Plum Zoom, a Lake Fork Ring Fry on a C-Rig, and a Spro 25 crank bait.  She didn’t get a bite.  Of course I kept the boat just right for me…. that’s what she said, more or less.   I picked my fish up off a rock in about 4 foot of water and on a sunken Cedar Tree.  There was no “tap-tap” to my fish, they sucked it up and ran for the deep water.  Reel Fun!

It was good to catch a fish again.  I thought that I had lost my touch for sure.   Both fish were caught in the first hour on the lake… the warmest time of the day, 1 p.m. to 2 p.m.

We did not see any birds on the main lake, but in the back of Cedron Creek, there were several large groups of birds, not diving, but pretending to dive… really active above the water.   They might have got down to business later in the day, but while we were there, they were just practicing.     We did mark a lot of whites / stripers about the 20 to 30 foot level.  We didn’t fish them, but it was the first real concentration of fish we had seen in a while.

It will not be long before its spring time and folks will be loading the boat with big ol’ Whitney bass.