We made another trip to Aquilla today.   It was cold this morning, but early on the wind was only 4 mph.  The air temp was around 40°, a big difference from the 77° when we were there on Thursday.   A cold front came through on Friday night and things changed.  The water temp on Thursday afternoon had been 68°.  A lot of fish were active on the surface.   We saw a number of bass jump completely out of the water chasing shad Thursday.   Not today though.   The water temp was 53 or 54 degrees this morning.   By 1 pm it had warmed to 59°.   I am sure that as the afternoon went on and the air temp warmed to over 70° and that sun was bearing down, the water warmed up well over 60 degrees again.   I was just too tired to stay out there.  The wind had come up about 11 a.m. to what I would guess was around 10 mph… just enough to make it work to hold the boat where you wanted.  The water today was very muddy, but it had distinct mud lines in some areas.

We fished two flat areas.  The flat we fished early on produced nothing.   It was a prime spot…  a nice spot with 1 to 3 feet of water with a channel that dropped off to about 6 or 8 feet.   But, we found nothing in the flat or on the channel.  We did mark some fish further out in an even deeper channel, one that was about 15 to 20 feet deep.  The fish were suspended about 15 feet down right along the ledge.

The other flat we fished was pretty large and the water level varied from 6 inches to 3 or 4 feet, but most was about 18 inches or so deep.  The Boss caught one 17 incher (a non-keeper on Aquilla) and we had a few other bites, all on T-rigs.  We also fished some top water and rattle traps, but they did nothing for us. 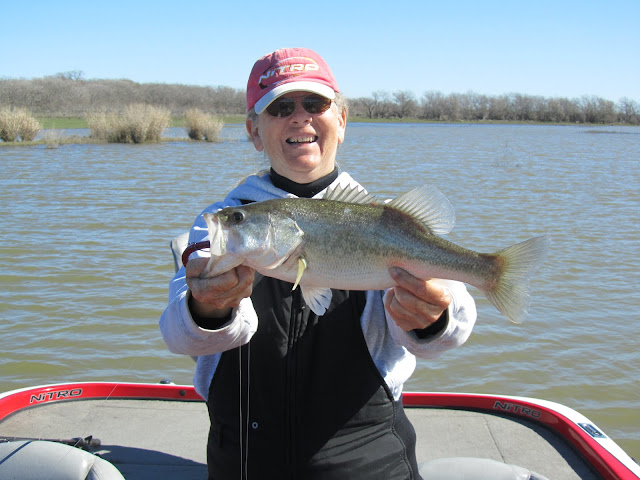 Bass in shallow water are fun.  They can’t run deep so they jump around a lot…

Like Thursday, the bites were light, often seeming like they were just moving the worm off their nest or something.  It was difficult to get a hook set.

And, like on Thursday, there were lots of boats out.   The parking lot wasn’t at capacity, but it was about 2/3s full.  Lots of bass boats again.  We ran into two sets of boats that were fishing in pairs.  Haven’t seen much of that before.   Also, (complaint time) there were a number of folks who didn’t give you much courtesy.   We had one guy come right up in the area we were fishing, shallow water, and run his boat on about half throttle, making lots of waves.   And then there was the guy at the ramp who pulled his boat out and parked just behind the right rear finder so that I could not back my trailer down to get the boat…..  Oh well, that’s how it goes when there are a lot of folks on the lake… nothing they do should surprise us any more.  And, its the main reason we like to fish during the week, just fewer folks to contend with.  However, there is the occasional fisherman that is courteous… there was a guy on the ramp this morning who was in line ahead of us… he was fishing by himself… he suggested we go ahead of him because it took him more time to launch the boat by himself….  Our thanks to him… He did get us on the water a few minutes quicker.

We probably should have spent less time in the areas we fished and more time on some of the rocky main lake points…. but it is just another case of shoulda, woulda, coulda.   Can’t spend a lot of time crying over spilt milk.  Just have to adjust next time.

I think the boss could have fished on until sunset tonight… but, not me… I hate this getting old stuff.

Anyway, the ramps at Aquilla are good….  some repair work going on at the Outhouse at the Dairy Hill ramp.  Parking lots will accommodate plenty of rigs.   The lake is only an inch or two off the pool level.   It just needs to clear up some.  These windy days are not going to help the clearing up part.  When it is windy on Aquilla, it just gets muddy.

If we can catch a day next week when the winds are down, maybe we will go back to Whitney, or maybe not… Aquilla is very tempting in the spring.