This is a leap year and today was the “leap day”….   I think that is what I should have done… just leaped into the lake….  I would have come closer to catching a fish.

Got up early this morning and checked the weather just to make sure it was going to be as nice as those lying weathermen said the night before.   Did the Willie Nelson weather check and went outside to see for myself.  It was about 60° at 6 a.m and the winds were relatively calm here.   Checked the Internet and it said winds would not get over 7 mph in the morning and would calm down to 4 mph or less in the afternoon.  Partly cloudy in the morning and sunny in the afternoon.  Can’t ask for better than that on the 29th of February.   The Boss didn’t get up and had to roust her out of bed about 7:15.  Time was a wasting!   But, she never complains about being woke up to go fishing….  by 8:30 we had our sausage biscuits made and wraps packed for lunch and we were hooked up and headed out the gate.

Whitney Lake continues to rise.  It was 2 feet 1 inch low this morning.  If it keeps this up that grass we have been talking about will be 5 or 6 feet down in another week or two… just kidding, but the grass is disappearing and if you don’t know where it is, you will not be able to find it because it is out of sight under the water.   The water is also continuing to clear up… its not good yet, but I would estimate that visibility around most of the mid-lake area is about 18 inches to 2 feet.  The water is a bit tea-stained.   The water temp at our 9:30 a.m. launch was about 54° to 55°.   By noon, it had warmed to 57° to 58°.  We are getting there.

The bad news is that there were some signs of the golden algae in the McCown, Cedron Creek, and Bee Bluff areas.  They were just minor signs though.  There were a few dead shad floating here and there.  The gulls were working above them, but slowly and methodically.  They were picking up the dead or dying shad from the lake.  There were a lot of birds swirling about, but relatively little diving and feeding.   The shad seemed to be of two distinct different sizes… either about 1 inch long or they were 5 or 6 inches long.   We fished Bee Cove and I would say that total we might have seen 12 to 18 dead shad in those coves.  Not a lot, but more than we have seen lately.  Over in Cedron Creek, there were less dead shad than in the Bee Cove area.  I think the middle of the lake (off shore) must have had some as well, because that is where most of the birds seemed to be working.  We did not see any dead fish other than shad. 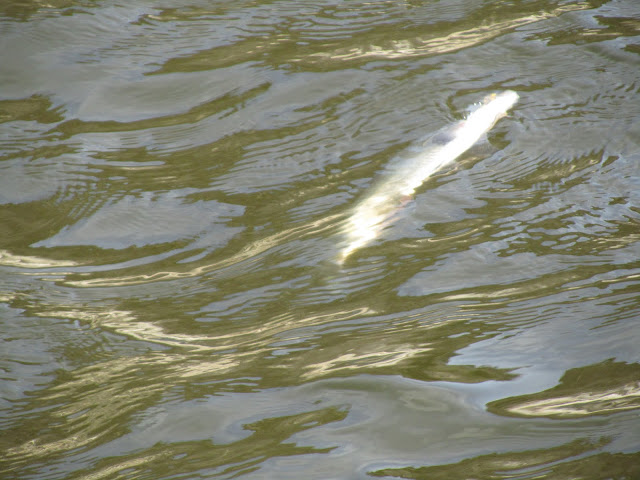 We fished some new areas and we fished all the way back to the ends of some of the smaller creeks in addition to the normal main lake points, humps and ledges that we normally fish.   We did not mark many fish anywhere other than the main river channel.   We did not get a single bite all day.  We fished T-rigs, C-rigs, crank baits, spoons and some top water.  Just did not find any fish to put a lure in front of.

It was a great day though.. nice to have a warm day to be on the lake.  We did get some nice photos, but not any of any fish… just the scenery.  This is one of the creek channels we fished. 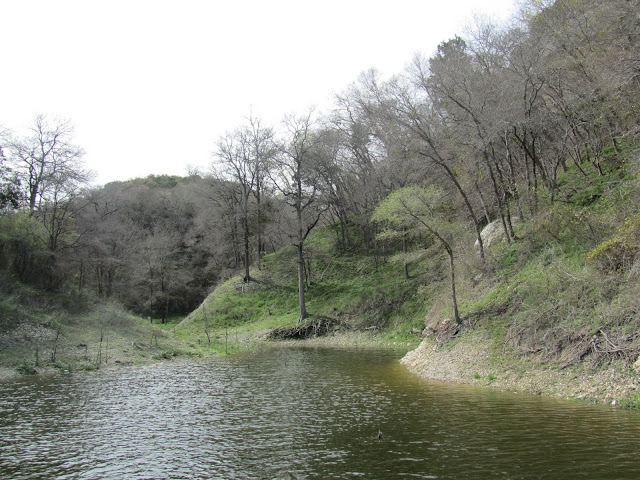 It is starting to look like spring… except that there are no bass busting the water.

There is some good rocky cover along this bluff line… we just didn’t find any fish there today. 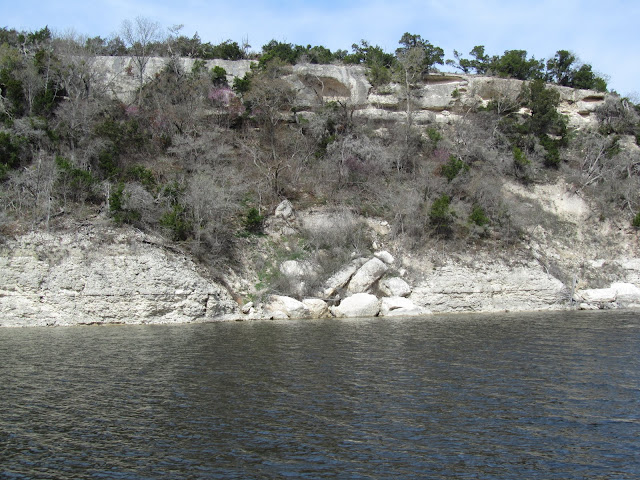 And this one…. well, it is just a majestic view…. 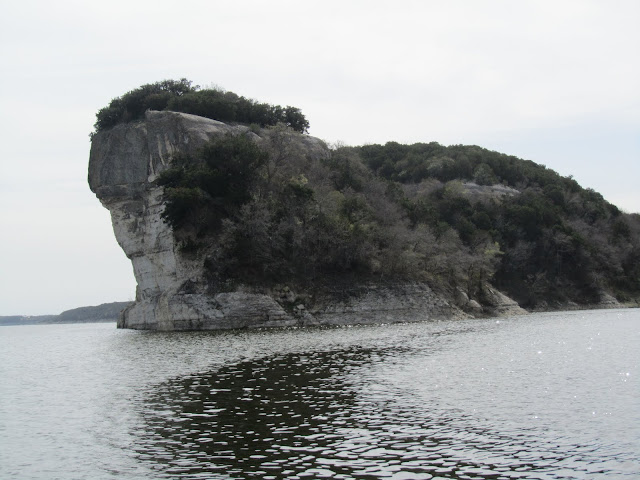 The point is that, in past years, we have been able to pick up at least one fish….  but not today.  It is just really strange.

We fished until 3:30 p.m.  The wind had died to near nothing… we fished shallow grassy flats and shallow points and humps in the warm sunshine.  We also fished the bridge rip-rap hoping to find some bass sunning on the rocks….  We just didn’t find any fish on the finder.   And, those we couldn’t see just didn’t hit the lures we were throwing.

We did get in a quiet lunch on the lake and even a short nap.   And, today we can’t complain about boat making waves and disturbing us or crowding us on our favorite spots.  We only saw one other boat on the lake and it was a pontoon fishing for whites or stripers out in the center of the lake.

Eventually, we are going to find some fish.  The water temp warms some every time we go and the water clears up a little more each time.  Unless we get some really big rains, I think the Corps will stabilize the lake now at or near its normal pool level…. at least one can hope.