We got up early today to make the one hour trip to the McCown ramp on Whitney.  We were down there by 7:30 a.m.  The weather was great, it was in the 60’s and a clear sky, light winds.  A beautiful morning.   We could tell by looking at the picnic tables between the ramp road and the lake that the lake had fallen about a foot.   The TWDB web site shows that it is about 3 feet 10 inches high today.   That’s in the ball park.  We were out here Friday and nothing much about the water condition has changed.  It is still a dark tea color and it is still trashy.  It was a bit warmer.  The water temp was in low 60’s when we launched, but it hit 70 plus by noon.   Conditions should have been good… the key word here is “should.”   Nothing has changed in our ability to find and catch fish either.  We didn’t find any and therefore, didn’t catch any.

We fished from Juniper Cove down to Lofers Bend Park.  We did not find any clean or clear water.  It was dirty and dingy everywhere we went today.  In fact, we saw lots of hazards on the lake.  Floating logs, floating patches of trash, and stumps… you name it, its out there.

We liked this bunch… floating out in McCown flats….  at least they helped us see this log which was about 10 feet long. 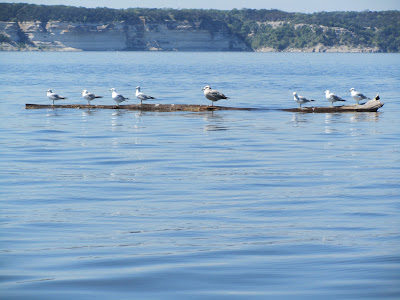 This patch of floating trash was off Lofers Bend Park.  It was about the size of a city lot. 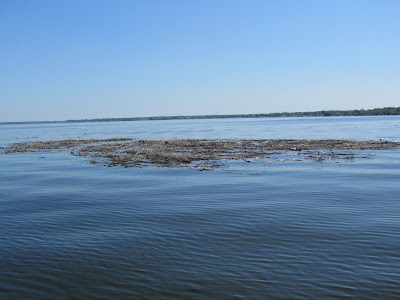 Here is a shot of some of the pelicans.  These are roosting on Walling Bend Island.  A few years ago, we were thrilled to see a half dozen pelicans on Lake Whitney.    Now it seems there are several hundred around the lake.  The smell isn’t so nice in the nesting areas. 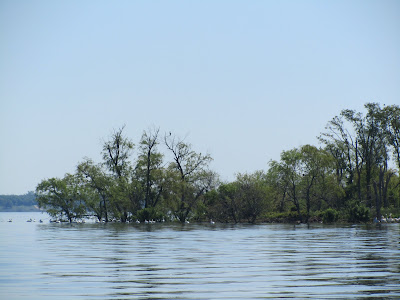 There are some scenic places too though.  Here is another blue bonnet shot. 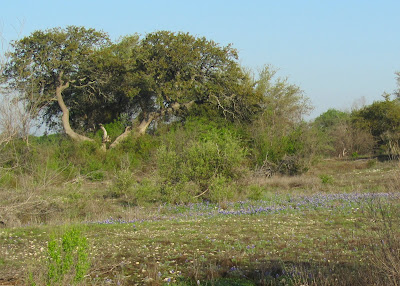 That is a great old tree.

Well, as I have told some folks who have emailed us about the fishing and the fish kill on Whitney.  All I can tell you is that we are not catching any fish.  We have seen a few gar around but that has been it.  The majority of the fish we have marked on the finder have been around 20 feet or deeper and there have not been a lot of them.  We do see some bass boats heading far up the creeks.  We have fished up the creeks some, but we really haven’t found any clear water in them.  Personally, I think the water is going to have to clear up and stabilize some before the fishing comes back in appreciable way…  I could be wrong.  I have been wrong many times before.

I do have a little ramp information.  Walling Bend on Rocky Creek is still good, no problems there.   The ramp at Lofers Bend West is in good shape if the Corps elects to open the park tomorrow as it is normally scheduled.  We have been told there is construction occurring in the park and it may not be opened.  We don’t know for sure, you have to check that with the Corps.  The Day Use Area at Lofers is still closed.   I also believe the Lofers Bend East ramp is closed.  The Harbor Master Marina ramp, I believe is open.   McCown, of course is open and in good shape.  The Cedron Creek Park is also scheduled to open April 1.  The ramp there is still underwater.   We did see a boat launch at Juniper Cove Marina today.  And, I have heard that the Red Bluff ramp at Steele Creek Park is open.   I have no information at all on any of the other ramps.  So there you have it… some personal eye-witness stuff and some rumor.

I can tell you that there were a dozen or so rigs in the parking lot at McCown when we launched at 7:30.  When we came in at 1:30 there were 29 rigs there, most bass boats and fishing boats, but also a few ski/wake-board boats.   The McCown Park had a number of folks camped in it.