We went back to Whitney today.  It has been a week or two since we have been out there and it was time to test the water again.

The lake is 1 foot 2 inches high at the moment.   We launched from McCown Valley Park ramp today at 8:30 a.m.   There was no one else on the ramp when we took off.  It was a beautiful morning.  There was a light north-west wind, the air temperature was 56° when we got up at about 6 a.m and around 60 by the time we got to the lake.  The water temperature was 69° when we launched.  The water color in the lake has not changed much from the putrid greenish-yellow tint… tea colored, I call it.  We did find a small spot here and there that seemed to be better than other locations and somewhat clear, but for the most part, it is murky and looks like the lake is turning over.. just “stuff” hanging in the water.  The water did warm up to around 72° by 1:30 p.m. when we came in. 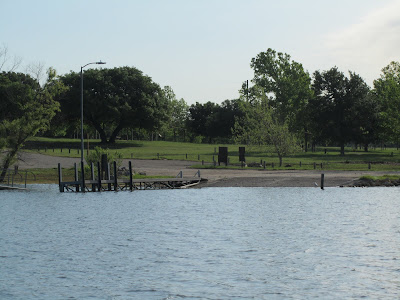 There were a number of campers in the McCown Valley Park and a few in Cedron Creek Park.

While the fishing may not have been good.  The day on the lake was great.  Here are a few more blue bonnet pictures from the lake today. 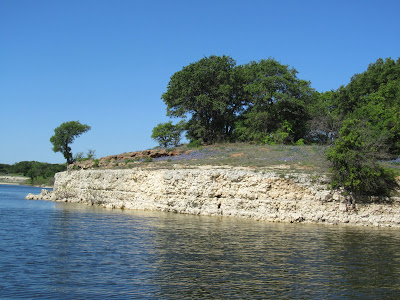 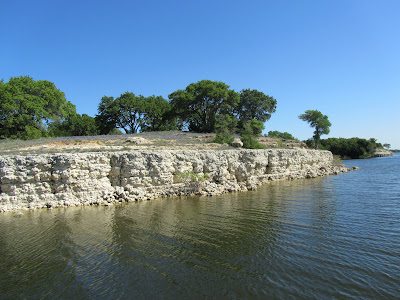 We call this the “lone sassafras tree”…   It’s not really a sassafras tree.  Actually I have never seen a sassafras tree, but one of my great-grandfathers and his immediate family are buried in the Lone Sassafras Cemetery and I just like saying it.  The tree out on the point marks a good spot when the fish are present in the lake…  And just for your information, we didn’t mark many fish today as “present.”  They were, in fact, few and far between on the depth finder.. not “present” as any depth.  We only saw an occasional gar floating along.  And, they looked healthy by the way.    We only saw two dead fish way up in Cedron Creek and they were gar.  If you can call what Whitney is going through a “fish kill,” then it is a minimal fish kill as far as we can tell.  Just not many signs of dead fish…. Not nearly the hundreds of thousands of dead fish that were evident a few years back.  I don’t know, I don’t understand it.   Clearly, the water is not right in the lake.  And clearly the fish (bass) are not where they normally are this time of year; at least they are not in the locations where we usually catch them.

We do have one other Whitney picture that I liked…. just a nice photo. 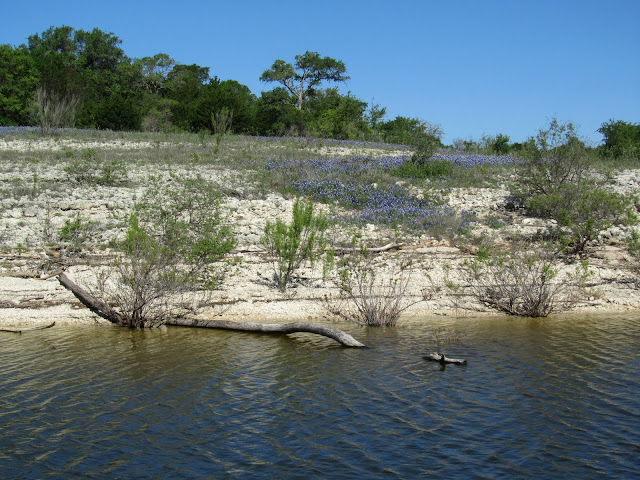 All this being said, we are catching some fish in Aquilla, our back-up lake.   We fished there yesterday and boated 5.  Not any big ones, but at least we caught fish and had some bites and some chances to catch some nice fish.  This is one we picked up yesterday. 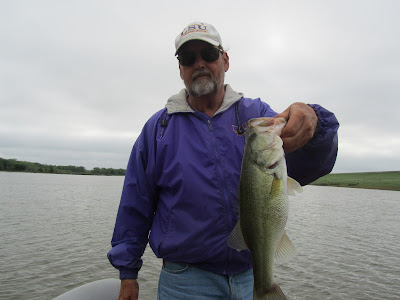 I donno what to think about Whitney.  I am sure there are some “excellent” fishermen who can find and catch fish on Whitney; we are just not among those folks.

We visited with a local boat mechanic we have talked to a number of times on the ramp at McCown. He said he had not heard of anyone catching fish on Whitney… and he was quick to point out that he and some friends had boated 200 plus sand bass on Aquilla over the weekend.   Like us, he does not understand the golden algae situation.  He said that supposedly the golden algae was supposed to go away when the water got around 64° or higher.  He also mentioned that they are letting water in at one end and out at the other so that could have something to do with the unsettled nature of the water.  There may not be any golden algae, there now, but something strange is going on in the lake….. Or maybe not.  Maybe we have just forgot how to catch bass on Whitney….

Well, that’s our report… couldn’t find fish on Whitney.  Ramps at Cedron Creek and McCown are in good shape.  Man, it is beautiful out there.  Maybe the lake is being converted to just a ski and wake-board lake and no one told us… Donno!