We were back on Aquilla today…. what a day.    Got up at 5:30 this morning for the one hour drive down….  Man was it foggy or what?   We could hardly see the end of the hood on the pickup.   I was almost to the point of getting out and installing the GPS/Finder from my boat in the pickup so that I could find my way back to the lake….  But, fortunately we made it down there without incident.  The fog on the lake was much worse than on the drive down.  This was the second type of situation we have been in that I was really happy to have the new Humingbird GPS / Fishfinder with lake mapping on it.   I just got it last summer and it really paid off when the water was down on Lake Whitney… I was able to run the river channel in the lower lake without running up on those high rocky humps….  Today, in the fog it was great.  We could hardly see the front end of the boat.  But, I armed the Boss with an air horn and put her on “collision watch” and then I just focused on the GPS and Navioncs Map of Aquilla and drove right to the other side of the lake where we wanted to fish.

It was supposed to have been sunny and light winds today.  NOT….   It was dense fog from 7:30 a.m. when we launched until 11:30 a.m. or so…   We only fished for about an hour or two  in the sunshine, we were off the lake at 2:00 p.m.   The mud has settled down in the lake… it is sort of like a Lemonade Gatorade, only a little darker.  The lake has been stable the last few times we have been out there, staying just about “pool” level.   Although, this morning the warning sirens at the dam did go off indicating that the Corps was letting some water out of the lake.  The water temperature was about 70° when we launched and it warmed up to nearly 74° this afternoon.

We had a fairly good day.  We caught 8 fish total, 3 fish that went 3 pounds or better and the rest were from a pound to two and half pounds.  Good fish.  And we managed to let another 4 or 5 get off.  The Boss had a nice fish get into a fence and pull off before she could get to it, then lost another in some thick grass.  I let one that bit on a frog get off before I could get it to the boat… all those fish appeared to be 3 pounds or better.

Here are a couple of the ones that did not get away: 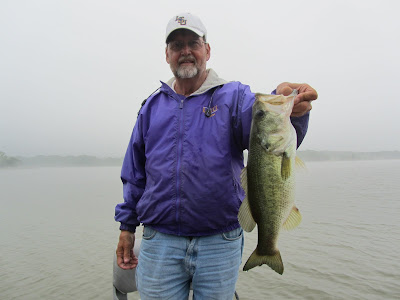 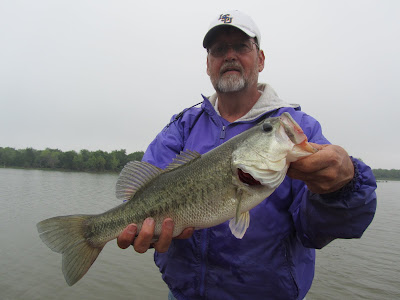 We really had some fun with the frogs.  But, we caught most of our fish on T-rigs.

The fish were holding very close to cover, stickups, grass, bushes.. but especially the clumps of grass that were individual, that is standing alone.   We fished spinner baits, frogs, T-rigs, and a Rex Spoon.   Really nothing worked unless it was dropped on top of a fish in cover.  I was really disappointed about one of the fish I lost on a frog… I thought I had the hook set pretty well, but he did his dance on top of the water and threw the frog back at me.  The Boss wasn’t happy about the big one that chomped down on her worm and immediately jumped when she set the hook… then it made a bee line to a barbed wire fence…. it was adios then.

It really felt good to be getting those tap-taps today and catching a few fish.  It was fun.

Last Saturday, we made a run up to Lake Grapevine.   We fished about the same length of time there… 7:30 a.m. until 1 p.m. and didn’t get a bite that we could swear to.   It was a hard day up there.

Here are a couple of pictures from “The Vine”: 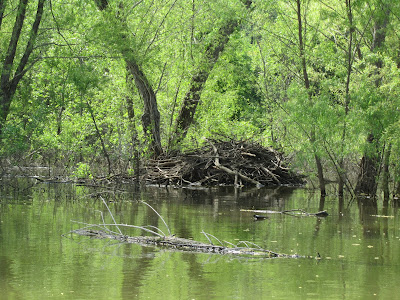 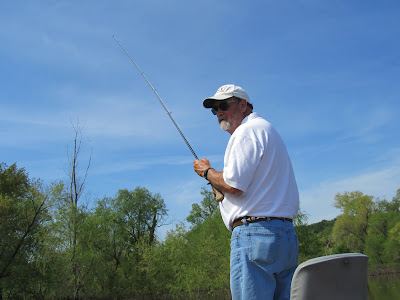 We talked to some other fellows up there and they didn’t have much luck either.  We told two guys in a nice Triton that we had “12”…. but, they were disbelieving right off.. after a laugh, they said they had nothing too.   And, at the ramp, another bass boater said that he had fished hard and only come up with one “dink.”   it was a tough day, but we enjoyed fishing with our son.

We are going to wait until we hear some folks saying they are catching fish on Whitney before we head back over there…  we had rather be catching than just fishing.