Actually, we went to Whitney yesterday and put in a loooooong day.   We caught one fish… 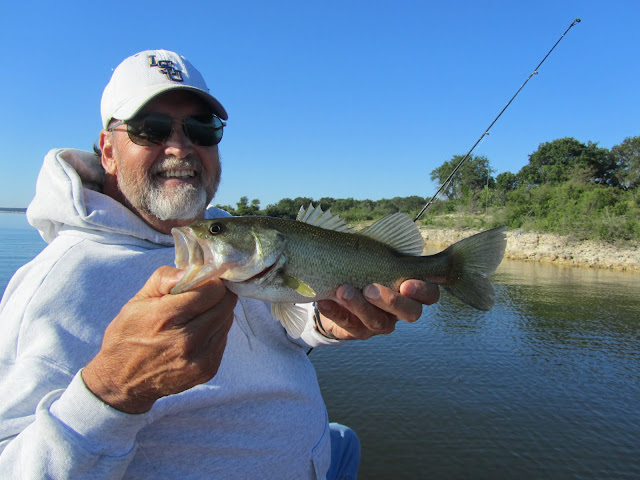 Whitney is 3 1/2 inches high.  The water is still stained looking, but is improving.  You can see a lot of particles of something floating in it… just makes a brownish looking color.   We fished our normal areas in the mid-lake area around McCown.   This is not to say that folks can’t catch fish in Whitney.  What I am saying is that we haven’t been over there in a couple of weeks or more and this was just a run to see if things had improved.  It appeared that, indeed, things were a bit better… we just did not locate any fish in the areas we would normally be fishing this time of the year.  The air temperature was about 58° when we launched and the water temperture was in the high 60s.  Both the water temperature and the air temperature came on up… the water got up to around 72° and the air was about the same, maybe 75° in the afternoon.  The wind was very light an easy day to fish.   There wasn’t a cloud in the sky… just beautiful on the lake.  For an April weekend day, the lake itself did not have a lot of folks on it.  There were 6 rigs on the ramp when we got there at 7:30 and I would say we were late.  If there were any more when we came off the lake, I didn’t notice them.  There were two or three ski boats out, but very light, I would presume because of the temperature.  Pretty nippy for jumping into the water.   The parks did have a lot of folks camping however.  I would guess that McCown and Cedron Creek were each half full or better.  For the folks camping out, the night air must have been terrific.  The blue bonnets are almost gone though.

Rather than whipping Whitney to a froth with little potential for catching anything, we went back to Aquilla today.   We had a fair day.  We each had two fish and missed a few others.  The Boss had big bass of the day with this 3-14.  It was a keeper, but she put it back.   It was a nice fish taken on a frog, fished where you couldn’t throw much else.  We had absolutely no luck on top water lures and the other fish came on T-rigs. 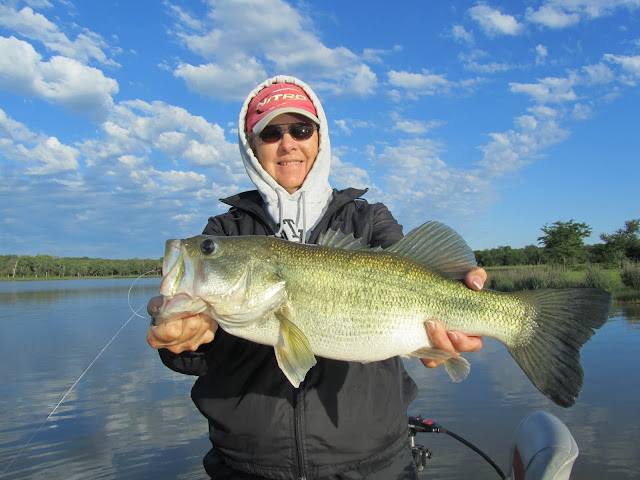 My biggest was a lot smaller.. 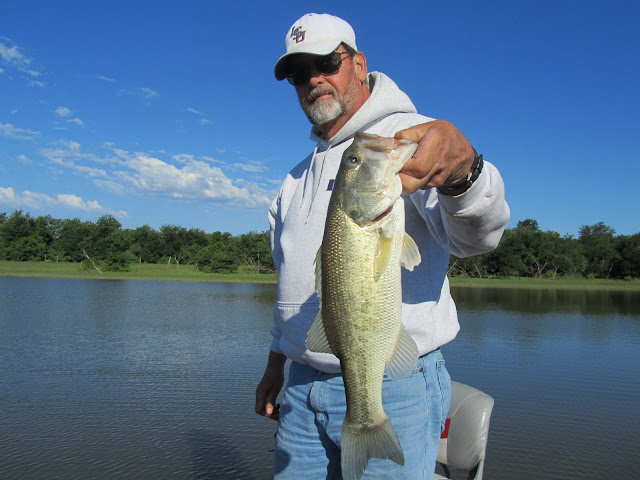 Aquilla is about 2 inches high at the moment.  Strangely, both Whitney and Aquilla have been relatively stable for the last several weeks, yet they are both still muddy.  I was really puzzled as to why Aquilla was muddy because the last time we were out there a couple of weeks ago, it seemed as though it was really clearing up.  Not so today.   It was so muddy, I think you had to put the lure right on the fish’s nose to get it to bite.  The ones we caught were the result of the fish taking the lure almost as soon as it hit the water.

The water temp on Aquilla when we launched this morning was about 68° and warmed pretty quickly to around 72°.  The wind was light, but more than yesterday.. I would guess it was around 5 mph.   We had a few clouds this morning.  We launched at 6:30 a.m. this morning, trying to be earlier than yesterday.  We fished until 12:30 p.m. and then hit the road.  I don’t know if we got a bite after 9 or 9:30 or so.

At any rate, we are happy to have the boat back.   Life is good.   Life is always good when you can be fishing.

With Lake Whitney and Aquilla being right at normal pool stage, all the ramps are good and getting around the lakes is easy.  You can fish just about anywhere you want to.   Those weather-guessers say the wind is going to be up and gusting the next few days.  Looks like it will be Friday or after before we are back out on the lake.    My guess is that we will continue to fish Aquilla regularly until we begin to find some fish on Whitney.  We will test it every week or two, but we are not going to work it hard.   We did take a look in the Whitney Views newspaper and there were lots of photos of striper catches, but we did not see a single black bass among them.  And, we haven’t had a report from anyone saying they were catching black bass again on Whitney… but then, would anyone tell if they were?