Well today was an early father’s day gift for me.   My youngest son, Joe, came out and fished with us.  It was great fun and brought back many memories of our old times fishing with Joe.  We have spent many an hour together on Lake Whitney and Lake Aquilla.  There are some fun stories.  Like many of those days, today is another great memory even if we didn’t catch many fish.

Joe came out last night and sent the night.  There were no earthquakes to shake us out of bed like on Thursday night.  We were up at 4:30 this morning and I didn’t even have to pound on his bedroom door like I used to he was up and at them as soon as I was.  Used to, we made the trip in the pickup, The Boss, Joe and I ridding elbow to elbow and listening to the Brian Hughes Texas Fishing and Outdoors show on the way to the lake.   We didn’t do the pickup today, we rode in the Yukon.  We all need the room as it seems as though the pickup has shrunk in width.  No way for the 3 of us to get comfortable in the cab now-a-days.   We did listen to Brian though on the way down.  Got to hear Randy Routh give the Whitney report this morning.  He was full of spit and vinegar and upbeat about the positives of Lake Whitney.   But, he is a striper and white bass guide…   I don’t think he does much bass fishing.  He reported that fishing was good and that the stripers were feeding on schools of fingerling white bass.  He didn’t have a black bass report.   It is always fun to listen to the Texas Fishing and outdoors report…   We always pick up a few tips… a few slang terms that the big boys use….  and a few laughs.  We have made that trip many, many times in the past.

The Boss made the usual sausage biscuits and coffee and we ate breakfast on the way to the lake.   Just tradition.   And along with listening to the radio, we told lies and jokes on the way down.  Fun stuff.

We got to the lake around 6:15 a.m.  It was 75° air temperature.  the water temperature was 80°.   The winds were fairly light, about 6 to 7 mph early on, though they did pick up by 9 a.m. or so.  The water had picked up a bit of muddy tint to it after the rains.   The water level was 537.33.  On Tuesday, TWDB reported the lake level at 537.42.   That would say that the water level was down today compared to then, but our fishing experience says the water level was up just a bit based upon the structure we fish.    Who knows, either way, it hadn’t changed much other than it was a little more muddy, though not bad.

One difference today though was that we did not see as many fish breaking as we had on Tuesday.  Though there were some whites breaking off an on out in the lake near the dam, there just was not as much activity as there had been on Tuesday.

We had quite a few bites, but we didn’t put as many fish in the boat.  The Boss whopped up on us today.   She caught 3, with the largest being just a little over 18 inches.   I caught just one white on a rattle-trap and lost two small bass on the Trap.  Joe missed several bass on a T-rig.  I think he was just out of practice. The Boss caught her fish on T-rigs. 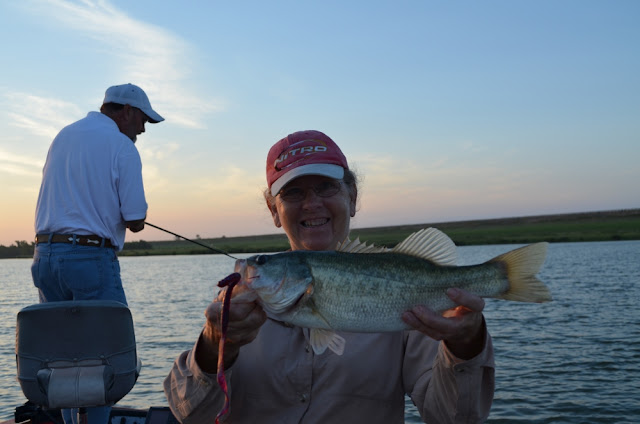 I think Joe was at a disadvantage because he was using our gear rather than his and he spent a lot of time adjusting the reels to get some distance from his casts….  then again, maybe those reels we loaned him just weren’t up to par… :-)… who can say?

We fished several of our favorite locations.  Only one produced.  The winds picking up proved to make things tough for the worm fishing.  I don’t know what happened on the trip back.  I went to sleep….  The Boss drove us home.

All in all, it was a great pre-Father’s Day.  We have come to really appreciate the time we get to share with our children.  They have their own lives now and are busy as they should be.    But, we got in our laughs and our hugs.  Just another great day on the lake… fish or no fish. 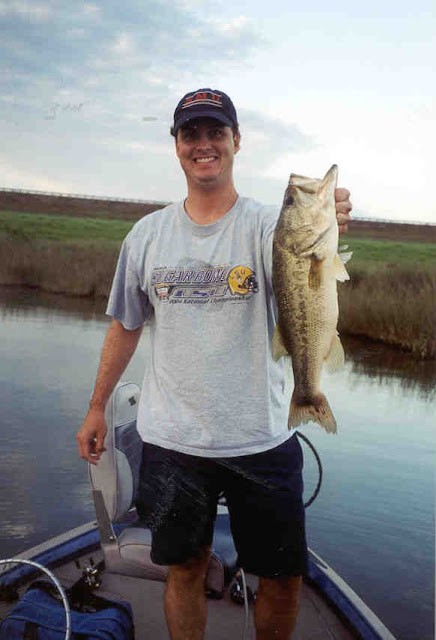