We were back on the lake again today….  This time at the lower end of the lake.

We launched at Lofer’s Bend East at 6:15 a.m.  The air temperature was 75° and the water temperature was 80°.   We fished mid-lake yesterday and the water was relatively clear.  Today on the lower end of the lake, the water was quite murky, silty in fact.   We fished some of the same locations we did back on June 14th.  The water back then had been clear, even though it had been quite windy.  One might speculate that the lake is turning over on the lower end.  I don’t know.  All I can tell you is that the water is dark and has a lot of particles floating in it.  The lake level is basically the same as yesterday having dropped 1/4 of an inch.

Man it was a beautiful day today.  It was like that old Willie Nelson song… “An un-cloudy day!”   The wind was really down this morning… less than 2 mph and by 10:30 when we came off the lake it was basically calm… smooth as glass.   And, it was hot!  It was 87° when we loaded the boat at the ramp.  There was one boat there putting in when we launched and 3 other rigs there when we came in at 10:30. 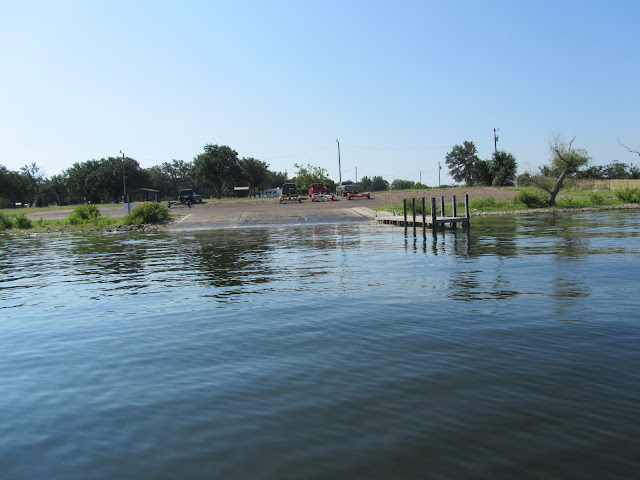 As you can see, the ramp is in great shape; all three lanes are open.  The Lofer’s Bend East Park looked to be about 80% full.

We also snapped a picture of the Lofer’s Bend West ramp as well. 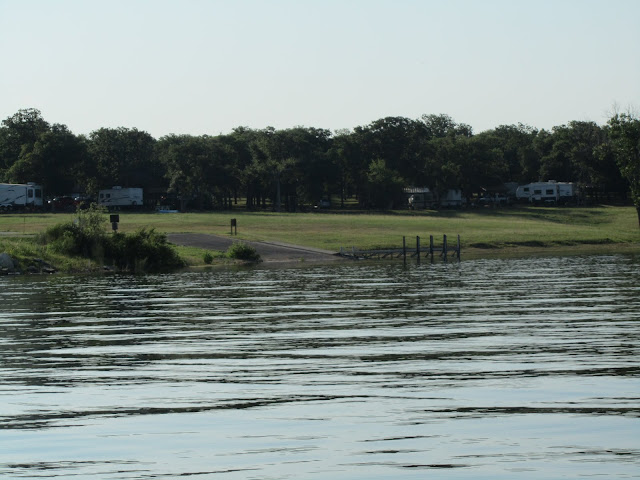 The ramp there is in great shape too.  And that park appeared to have a number of folks in it.  All the good water side spots apeared to be taken.

And, we made a run over to Rocky Creek and while we were there, we snapped this photo of the Walling Bend Park ramp on Rocky Creek. 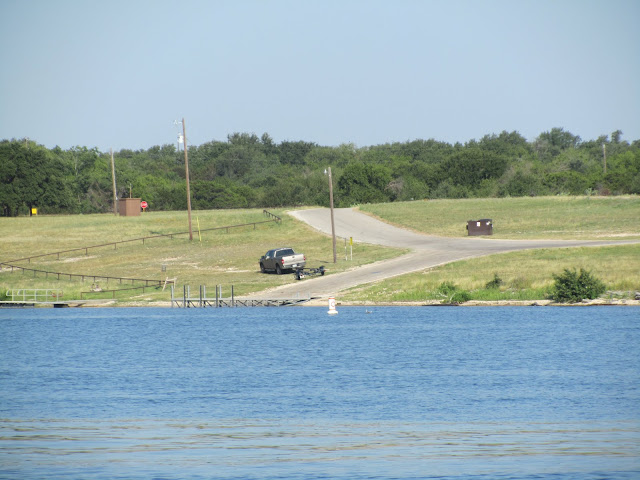 As you can see, that ramp is also in great shape.   The Walling Bend Park is a free park and does not have camping facilities.  It is primarily a day use park.

Our fishing report is worse than yesterday by far.  We got ZERO bites.  We fished a number of our usual lower lake spots.   We did not mark any fish on the finder.  We did see a number of small schools of minnows on top of the water, but generally, there were no fish chasing them and no birds diving on them.

We did fish a shallow point that had some birds on it and what appeared to be a few bass striking, but we were not able to entice one to bite.  We fished buzz baits, Pop-R’s, Frogs, Rattle-Traps and T-rigs.   Just turned up nothing.  Pretty discouraging.

All I know to do is to keep looking.   And, if I really get desperate for a tap-tap I can run down to Aquilla.  I have a great report from a reader about his Father’s Day trip to Aquilla.   I shoulda fished with him… you know woulda, coulda, shoulda….   Anyway, if he gives me the go ahead to publish his email I will give you a GREAT Aquilla report.