Man, I never thought I would live to be this old…   65  and going on who knows.   And what a strange world.

Anyway, we are still alive and kicking.  We were on the lake at 6:15 a.m. this morning.  What a beautiful sunrise it was.  Nothing is much better than to be on the  lake at daybreak…. well, I guess you could have several hundred acres of breaking fish and that would make it a little bit better. 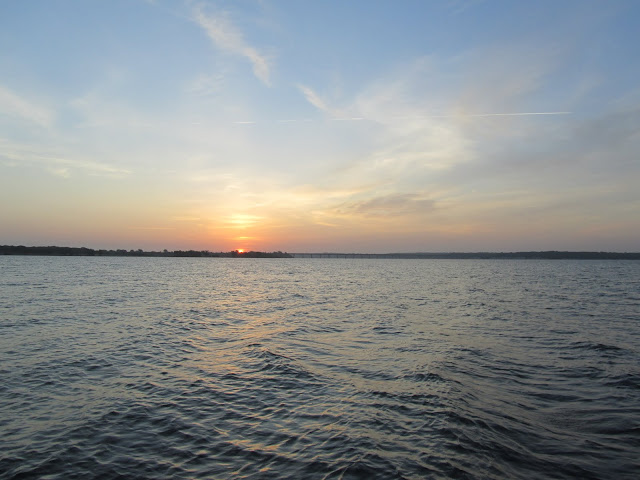 But,  there were no acres of schooling and breaking fish.. at least not that we could see.   But it was a beautiful sight this morning.   The winds were a bit stronger than the 3 miles per hour that the Internet Weather.com site predicted.   I would have put them at closer to 7 to 8 or 8 to 10 from the south. There was no easy fishing on the exposed main lake points.  The air temperature at launch was 75° and the water temperature was 80°.     As the day went by, the air temp went to around 85 (when we got off the lake at 11 a.m.), the water temperature never got above 82° and the wind died to near nothing, 2 to 3 mph in my estimation.  By 11:00 you could fish pretty near anywhere you wanted to, if you could stand the heat.

The McCown Park ramp looked great this morning.  The water level is 532.47, just about 6 inches low.  But, on Whitney that is great.  Visibility in the water was about 2 to 3 feet on the shallow humps and points. 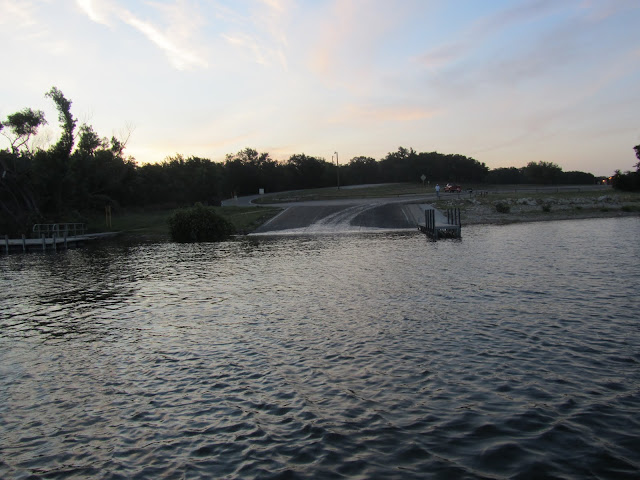 We fished many of our mid-lake favorite spots, from  above Juniper Cove down to Bee Cove.  Not all, but many of them.  We fished top-water and rattle-traps early.   Some frogs and Pop-r’s.   We fished shallow structure and  some deep main lake points.  We also fished some T-rigs early.   Zero bites.

About 10:30  we found some fish on a point that extends a half mile or so off shore and is 7 to 13 feet deep with some stumps, that is muddy and stumpy.   We picked up one 15 inch fish on a T-rig and we had another 3 or 4 bites, but did not get hook-ups. 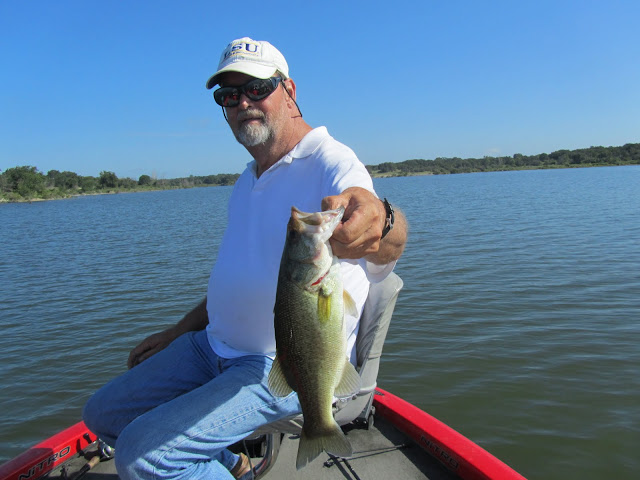 I think if we had been able to start with this location we would have caught some fish.  We did not find any fish shallow.   We did not find any breaking fish.  And we only got bites on a T-Rig.   With the temperature getting as hot as 100° this weekend, you are going to have to get on the fish early or risk getting baked out there.

The Corps of Engineers has its contractors working on the parks.  The mowers looked like a bunch of ants on a sugar cookie today and they were humming like bees in a flower garden.   Weed-eaters were running, garbage cans being emptied… just lots of stuff going on.  Cleaning up in general.  My guess is that they are getting ready for the 4th of July weekend here in a couple of weeks.   McCown was less than 20% full as was Cedron Creek Park.  But, the big campers were out there.

We pretty much had the lake to ourselves.  We only saw  two other boats on the lake and of them, only one bass boat. There was no one in the McCown parking lot when we got there and only one rig there when we left.  The boat that was there when we left was a ski-boat rig and those folks needed most all of the 3 lanes on the ramp to get their boat launched.  I can remember those days myself, but just barely.  We are in and out in a flash now a days.  The Boss has that Mercury cranked by the time it hits the water and then the boat on the trailer by the time I get it down in the water now a days.   You would think we were tournament fishermen if you saw us launching and trailering the boat… not so much when you checked out our live well….

All in all, it looks like the ramps are good.  The water is clear and relatively stable.  The rains didn’t impact the mid-lake area of Whitney at all.  The McCown, Cedar Creek and Cedron Creek ramps looked in great shape.

I am thinking that the fish are on off-shore structure now.  That’s where we found them today, about  1/4 mile off shore.   I just wish we had found them a little sooner this morning.   We are just too old to stay out there in that heat.

AND…  I did get this report from John Tibbs, Inland Fisheries District Supervisor – Waco,  with the Texas Parks and Wildlife.  This was in response to an inquiry I made about the tough fishing on Lake Whitney:

I have been receiving reports about poor fishing for most species in LakeWhitney since it filled up.  We did sample the sport fish and prey populations in the reservoir from last fall through this spring.  The largemouth bass population was sampled in the fall by electrofishing and it was improved over the previous two surveys. Subsequent to that survey, we had the golden alga fish kill in early spring, but few dead bass were counted.  In fact, few fish were counted period, so it was a relatively minor kill.  Populations of prey fish are also good, equal to or better than recent years.

So I’m not sure what the reason for the poor fishing is, but I will hazard a guess.  The fish are there, so perhaps the dramatic change in what had been a long-term drought could be to blame.  If you think about it, during the drought the water volume in Whitney was just over 50% of the volume when full, and now it is full.  In addition, most of the habitat is in that new water, including annuals and even trees such as willows that grew up on what used to be dry ground.  That’s a lot of new habitat for fish to spread out in.

Our most recent report should be available on our website by September.  A report/management plan is written every four years for all major reservoirs in Texas, and they are available as .pdf’s on our website for anyone to download.

This is a much better guess than I could give you about why fishing is so tough.   I think the general message is, the fish are still there, but we as fisherman haven’t adapted.