You have to love Whitney, Texas.  It has a 23,500 acre limestone lined reservoir 5 or 10 minutes to the west, and Aquilla, a shallow tree lined, 3,020 acre lake to the southeast.   Both vastly different, but both can be great fishing lake…  if one is not working for you, you can quickly get to the other one.  Folks who live down there and like to fish sure have it good!

It was Aquilla for us today and early!  We were away from the house by 5 a.m. and  had some great scrambled egg sandwiches and hot coffee on the way to the lake.

We were on the lake at 5:55 a.m.  We were the first rig to the ramp, but there were two rigs right behind us.  The boat behind us was a pontoon… either fishing for whites, crappie, or catfish….  hard to say, but they didn’t waste any time getting in the water either.  We were gone before the 3rd boat started unloading.  It was still dark, and today the running lights worked…..

It was about 75° or so air temp when we launched.  The water temperature was 85°.   The lake level is 536.68, about 10 inches below the 537.50 pool level.  The water is still relatively clear… that greenish, Gatorade color.  The wind was 3 to 4 mph when we launched, but it died down quickly and by 8:30 it was completely calm…. easy fishing and boating.

It was still a bit dark as we headed down the lake from the Dairy Hill ramp.  And, there was fog building.  By the time we got over to our spot, the fog was pretty thick down on the main lake.   We were fortunate to have our Navionics Map or we would have been a while getting there.  It was actually around 7:00 a.m. before the sun even gave a hint of sticking its head through the clouds.  The clouds and fog stayed around until about 9:30. 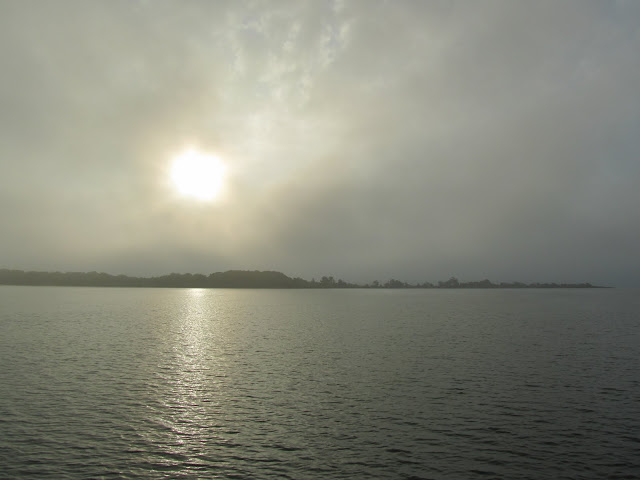 There were a few flights of gulls buzzing the lake early.   I think they were looking for breakfast.   There were some whites / sandies breaking, but they always seemed to be more than 200 yards from us… we could hear them and see them, but they were too far away to get there before they were gone.   We tried waiting them out, and on a couple of occasions, they did get close enough to cast into, but only The Boss landed any  whites today.  I think she caught 2 or 3.  The bird activity actually died down as the fog rolled in.  This heron sat it out in a tree. 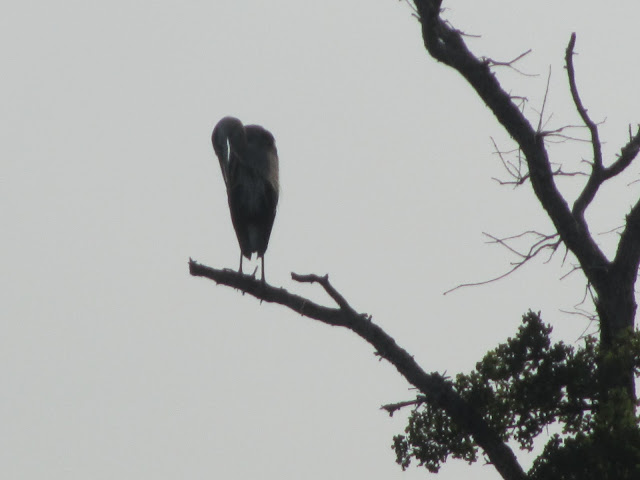 We managed to catch 4 small black bass on T-rigs.  The largest might have gone a pound.   The fish, bass nor whites, were breaking on top of the hump south of Snake island.   We did try top-waters early. Pop-R’s and Spooks.  We also tried some crank baits, Spro’s and Rattle-Traps, even some chrome slabs.  No takers from the bass population.  And we fished the usual T-Rigs and C-Rigs.  The only bites we got came on the T-Rigs.  Plum was their favorite color.  Here is a picture of one of the small fish.  The Boss wouldn’t let me take her picture today with the little fish. 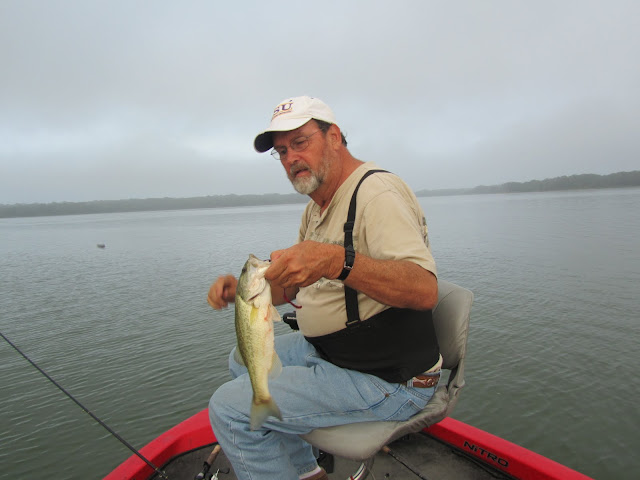 It was interesting this morning, everyone of those fish just gulped those 10 1/2 worms, swallowed them completely.   The turtles will eat well today.  We also picked a couple of fish around Snake Island.  The Boss thought this was a great picture. 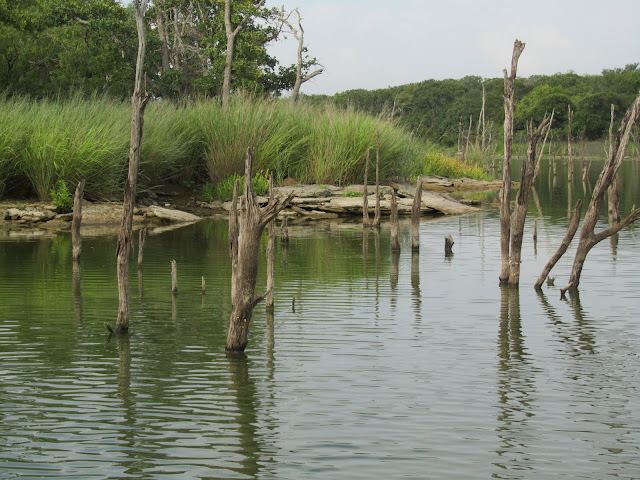 We lost several small fish in these stumps.   I did get one in the boat that weighed about a pound.  He made it around several stumps and stickups before I got him in the boat.  My mono filament line was nicked for 4 or 5 feet above the hook.   Just the way it is when you fish this kind of water in Aquilla.  A person fishing back here actually needs some good braid to fish this stuff.

There were 7 rigs in the parking lot when we got back to the ramp at 10:15, with one already headed out of the exit.

All in all, it was a fair day… an enjoyable day.  The winds were down, we were there early and got on our spots without issue.  The lake wasn’t crowded.  It was cloudy and cool.  Can’t get much better than that.  We just wish we could have put a few more fish in the boat and some with some size to them.