We were late getting up and late getting to the lake today.  Were not on the lake until 6:30 a.m.   The air temperature was 77° this morning.  The water temperature was 85° when we launched.  The lake level continues to fall.  The current level is 536.55 according to the TWDB web sites.  This puts the lake down about 1 foot.   I don’t think the Corps is releasing any water, that the loss is due to evaporation because it is so slow to fall… but, don’t know for sure.  The water was a bit murkier this morning than it has been, at least in the areas we fished.   The wind was about 5 mph hour, putting a little more than a ripple on the water, but not too bad.  There were no clouds this morning; just blue sky and sunshine.  The floating dock is getting a little lower…  we suggest you be careful at the Dairy Hill ramp when off loading or unloading, there are some rocks along the front of the dock.  Be sure and trim up.

Even though we were late getting to the lake, we were the first on the ramp and there was no one there when we left.  We did see at least two rigs on the Old School ramp and there were 4 other rigs on the Dairy Hill ramp when we returned at 9 a.m.  It was a slow day on the lake and a person could pretty much fish where ever they wanted without bumping into anyone.

We fished all our normal places…  off-shore humps, main lake rocky points, and the structure around Snake Island.   We saw some whites working early, but like the last few times we went, they did not stay up long in any one location.    We fished some top water including Pop-R’s, and frogs, We fished crank baits including Rattle-Traps and Spro’s.   We fished T-rigs.   We picked up 3 white bass on the crank baits, but that was it.   We also had a few bites on the T-rigs, but they were very light bites and they were dropping them about as quickly as they picked it up.   Just a tough day fishing.

We pulled out of the lake and were getting the boat tied down for the road trip when we saw this cat hanging in a tree near the restroom. 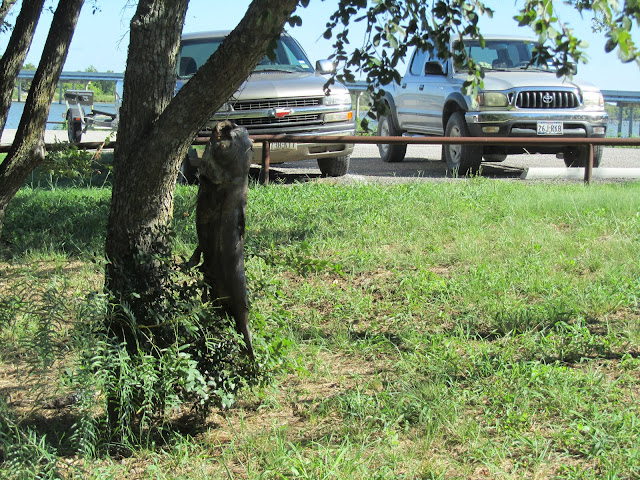 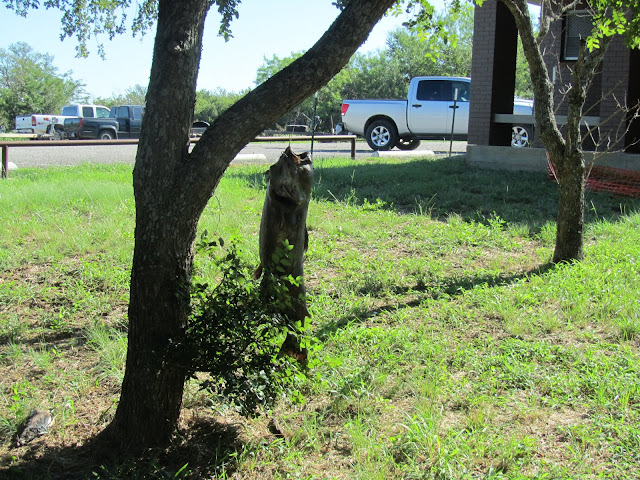 Now it is a huge waste.  Sometimes I just really don’t understand people.   If you are going to take the fish out of the water and kill it… why not eat it?

Well… that is it today.. short and sweet….  or stinky if you were near this catfish.