There was NO ONE on the ramp when we got there.  The McCown Valley Park looked to be about 2/3’s full and there were a number of boats pulled up on the bank in the cove next to the ramp and parking lot area.   But no one was moving much.   A couple guys sitting around a camp fire having some coffee, but that was it.

The air temp was about 81 or 82 degrees.   The wind was non-existent.  The lake looked like a mirror, due in part to the wind and due in part to the fact that there were no boats visible anywhere on the lake even though this is the back end of the 4th of July holiday.   I wasn’t sure when we left the house as to whether or not the lake would be busy, but it wasn’t.  We were the first boat on the ramp.

We zipped across the lake and checked out several areas in the Cedron Creek area.  This shot is of the Cedron Creek ramp at dawn.  There was only one rig in the parking lot, but I believe it had been there all night. 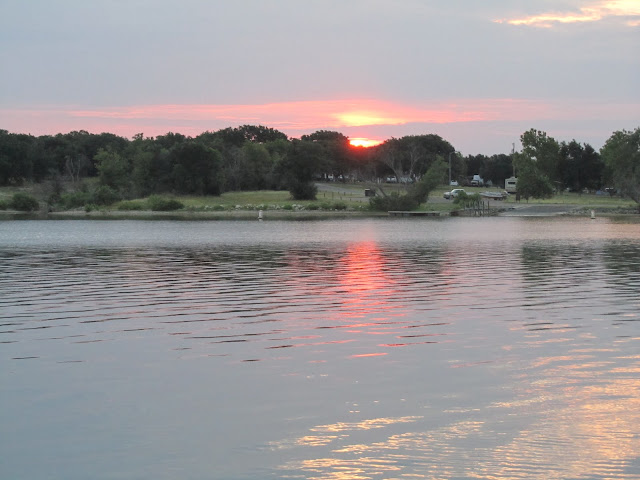 How about that sun rise.  It is great to be on the lake at dawn.  Nothing much beats it.   The moon is 1/4 past full.  It was nice there this morning too. 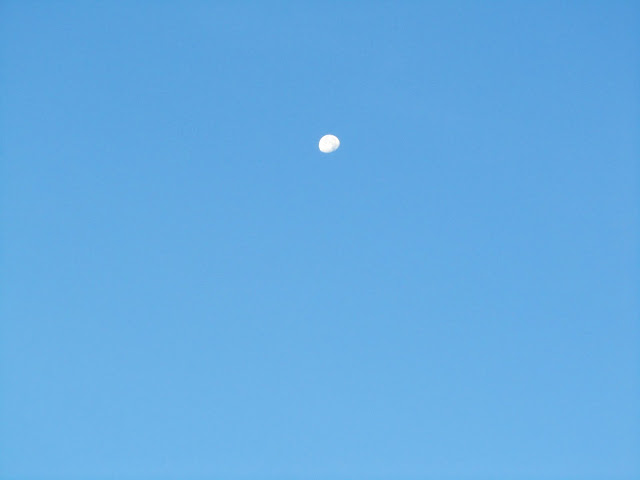 The water temperature this morning was 82 to 85 degrees depending upon the part of the lake we were in and the depth.  The lake level is 532.62 or about 1 foot 4 1/2 inches low.   The lake is staying relatively stable.  The water is relatively clear and visibility is a foot or two.  Can’t complain about the water.  The wind did not get over 2 to 3 miles an hour all morning and it was mostly cloudy for us right up until we left.

We fished some of our favorite locations in the Cedron Creek area… not all, but the ones we thought might produce a bass or two.   We did find some “minnows” working on a shallow flat and saw a fish or two striking in them every once in a while.  We got out our top waters and worked them over for a while.   I did catch this monster: 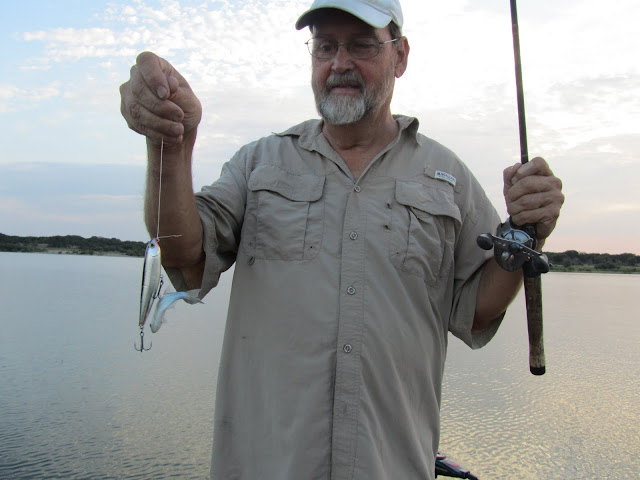 That’s a white bass.  These little dudes were “schooling” in the shallows. Can you believe that little guy slapped at that big old lure?  Crazy!

We worked them over for an hour or so thinking we might latch on to a bass feeding in there.  Something was sure feeding in there.  Then The Boss got a strike and had a pretty good fight getting this one to the boat.  You should have seen her face when she swung it aboard. 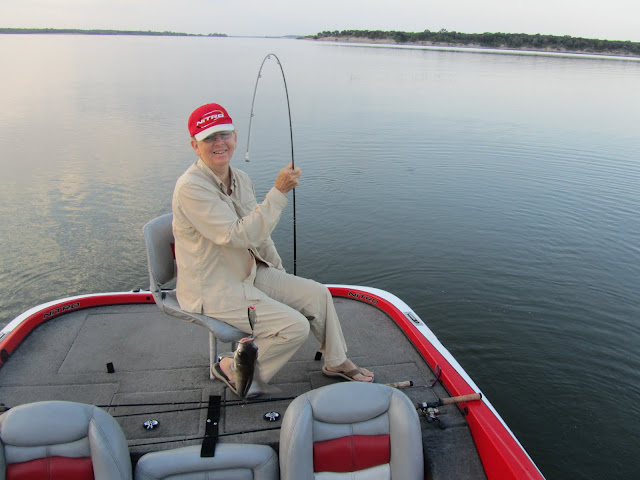 It was about a pound catfish.  She thought she had a 2 or 3 pound bass the way it was pulling.  Not a happy camper… she wanted a bass.  Hey, do you like her new hat.  She pulled that one out of my hat collection box.  It was one of two that Bass Pro gave us when we bought the boat.  Her’s was 6 years old and faded…. she likes that bright red…

We fished on down the lake, Bee Cove and beyond.   We found nothing on the humps or the points or the deep ledges.  It was a beautiful day though.  With little to no wind, the fishing was easy and with the clouds it stayed relatively cool  We fished until a little after 11, getting in 4 full hours of fishing…  just wish we had had a little catching to go with it.

We fished our normal stuff.. top water… Pop-R and such, T-rigs, C-rigs, crank baits….. Spro’s and Rattle Traps.  The normal stuff, but also with some different colors today.

For a Saturday in the 4th of July week, there was little boat traffic.   We did not see any jet ski’s until 9 a.m.  and then only two for a long time.  The wake board and ski boats didn’t get out until after 10 a.m., and there weren’t many of them either.  There were no boat waves from bass boats or other wise to gripe about this morning.

We had considered going to Aquilla, but figured it would be packed and we would have to take a number and get in line to fish our spots there.  But, it was a good day to have been on Aquilla.  We could have fished those off-shore humps and flats with ease today.

We were out of there by 11:30 and decided to catch lunch at Sister’s Diner.  Yep, they are still there and still serving that home cooking with a smile.  We got to say hello to Lynette too.    If you have the time and inclination, you should try Sisters.  Its a down home, regular folks place to eat.  Friendly with plenty of parking for that pickup and boat.

And, by the way, the Park Ranger was at the ramp when we got back and he was giving a safety check to every boat that was launching.   Not a bad thing.  Everyone needs those life jackets and such.

All in all, it was a good day on the lake.  Comfortable temperature with the clouds, easy boating with the non-existent wind and some great scenery!  Just wish we had caught a bass or two.