Well, it’s hot this week and it’s windy!  We aren’t fishing in the heat and wind…  we are taking it easy.

But, we saw the “lureguy” at church Sunday and talked a little fishing with him in the parking lot there.  The lureguy is Keith Jones, a 25 year collector of lures and in his spare time a big bass fisherman.  Keith and a buddy run the working-man’s tournament at Cleburne’s Lake Pat on Tuesday evenings from 6 p.m. until 9:30 p.m. each week.   We asked Keith if we could come by and take a look at his lure collection and maybe write an article about him….  Well, I think that next to fishing, Keith likes to talk about fishing…. and talk he did.   Keith has more stories than Walt Disney and John Grisham combined…  and better stories too.

We met with Keith in his “tackle room”…  it had about every thing to do with fishing that a body could think of, except for the boat and motor and those were in his garage. 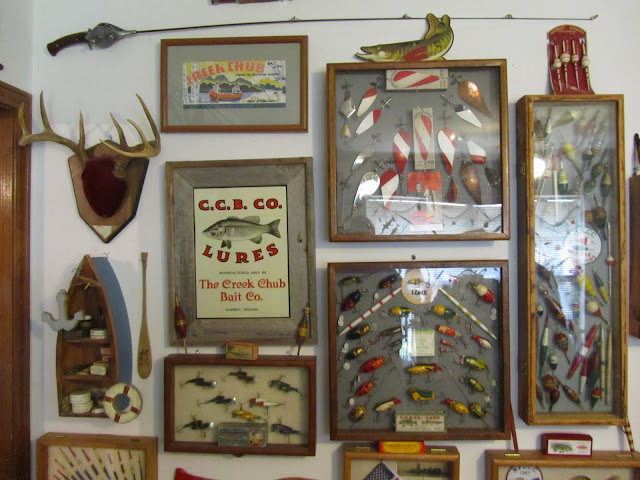 Keith not only collects lures, but he collects everything fishing related. 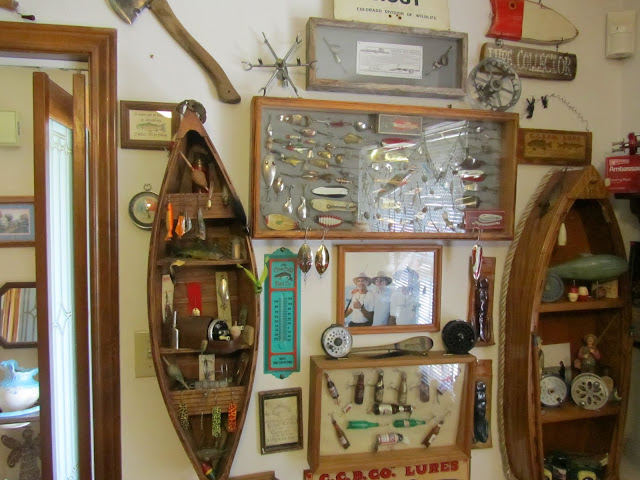 Keith has lures, reels, rods, fishing cleaning equipment, minnow buckets, tackle boxes…  and much more.  Everything had a story or at least Keith had a story for every thing…  Keith is a walking, talking encyclopedia of fishing tackle lore and information. 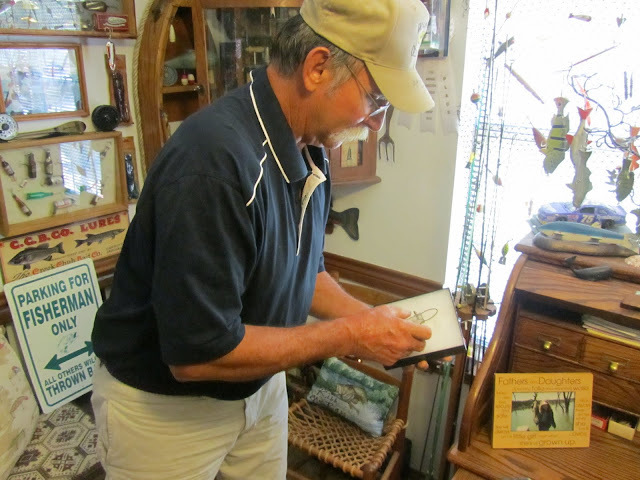 And, he has a lot of historical fishing stuff too…. this is a case that holds an old magazine story of George Perry’s 22 pound 4 oz bass and the lure he caught it on… or maybe it was this other lure… either way Keith, the lureguy, has acquired the same lures to encase with George’s story.     I guess you will have to read the article to get the drift of the debate over which lure it really was…. 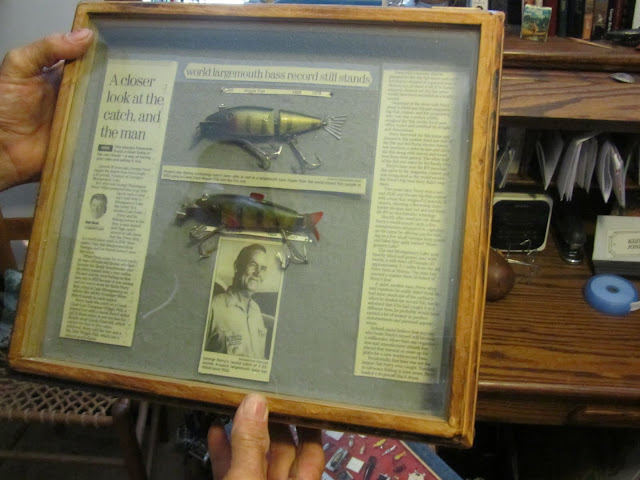 The Boss loved Keith’s story about buying a wedding dress for one of his daughter’s wedding….  he paid for it by selling his “frog” collection that he had at the time.  He has re-built his collection and this is part of that collection. 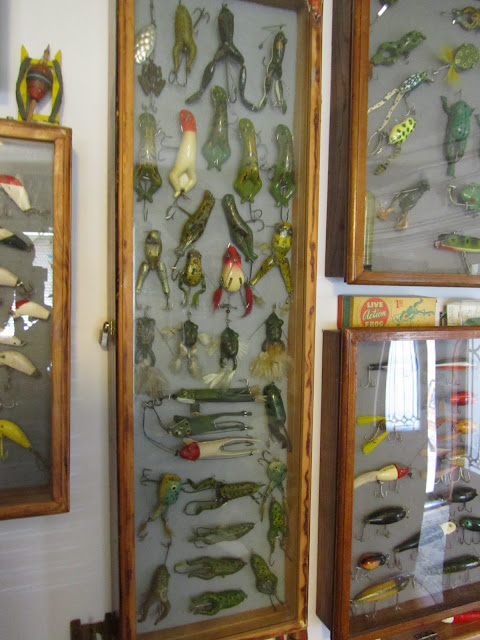 This is a photo of the lure that started Keith’s collection, he got it from his mother’s tackle box.   Keith had some great stories about fishing with his mother…  he and his Mom fished and his Dad cleaned them… Dad had no patience for fishing. 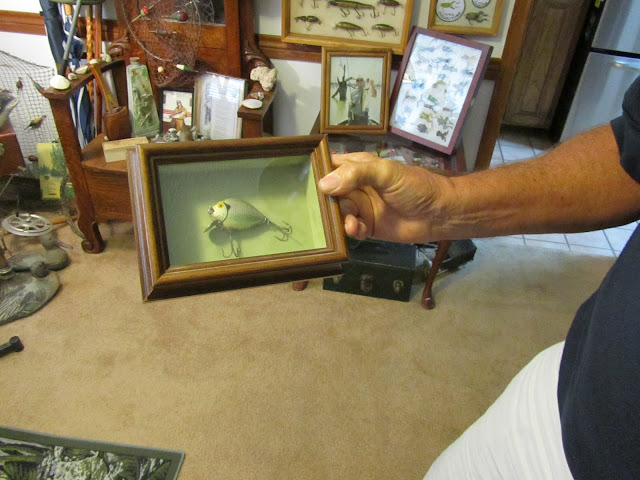 Keith had some old reels as well, and other stuff too… This is an old, rare Ambassador 2500C and in the back ground is a display case full of different types of fish cleaning tools…   one was even a “Redneck fish cleaner”…  a board with Budweiser bottle caps nailed to it… that one still had fish scales attached so we know it worked. 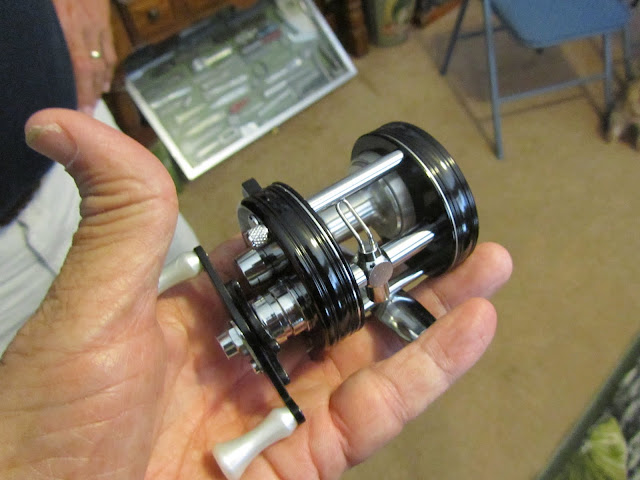 This is what I think Keith called an “Indiana reel” .. one that was built for trolling in the old days… he had several of these.  Actually, this is one of many really strange devices and lures folks have invented for fishing …. it was obvious that a lot of fishermen had a lot of time on their hands to think about fishing stuff… far too much time. 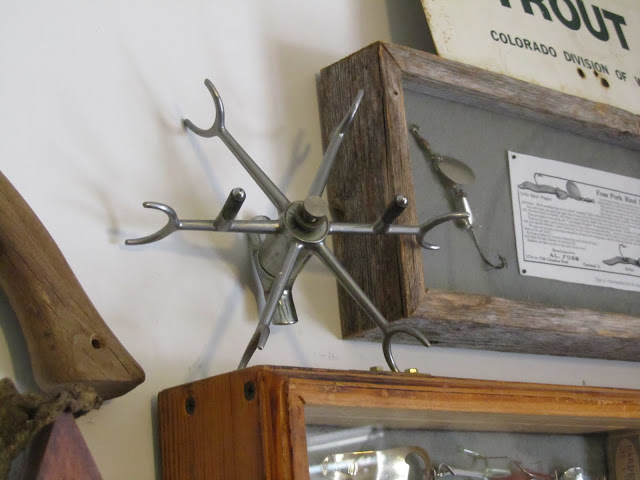 This is Keith in front of his “trophy wall”  with three of the 7 plus pounders he caught on Monticello back in the days when it was hot.  Keith’s best fish was a 10 pounder from Lake Aquilla.    There is a picture in there somewhere.. just not mounted. 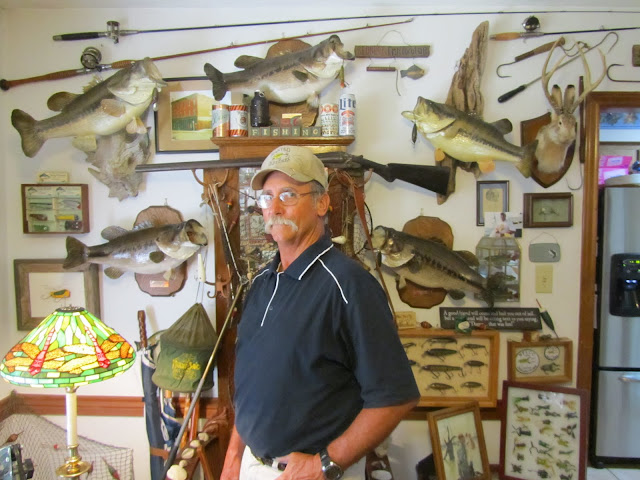 Keith loves to collect and trade fishing tackle…   when he is not fishing.   He will also share his time with you to talk about fishing if you want as well.