Actually, most days are stones when you are fishing for large mouth in the middle of the summer.  It was another tough day on the lake today…  The Boss got two bites, and I got two bites.  The Boss broke one of her fish off when she set the hook, the other one dropped it…

We were a little late getting to the lake today… I think it was close to 6:20 a.m. or so.  The temperature was about 75 or 76 degrees when we launched at the Dairy Hill ramp on Aquilla.   I think there were already 4 or 5 rigs in the parking lot and another was unloading when we got there.  It was 10 or 15 minutes after daybreak when we got to our spot….    There were plenty of boats on the lake, but fortunately they wanted to fish elsewhere and we were good with that.   At first there was a 2 to 3 mph breeze.   But, by 8 a.m. the lake was slick.  Fishing and managing the boat was easy.  It was sunny today, few clouds in the area.  We noted a number of folks pretty much working their one spot, not a lot of boat ridding.  The water temperature was about 85° and it was clear out in the lake, but murky up in some of the shallow areas.  The lake level hasn’t changed much 532.62 today according to the TWDB web site.  That is about one foot and 8 inches low.  The Dairy Hill ramp is in great shape.  The Corps still has us rationed to a Port-a-Potty… I don’t know what is up with the construction / renovation project for the rest rooms.

About a quarter to 7, I felt a very light tap-tap.  I set the hook and missed.  I threw back into the same spot a couple of more times and there it was again… a tap-tap…  then the line went slack and I waited.   It didn’t come back. I picked up the rod tip to shake the worm…   I felt nothing.   Hmmmm…. I began taking up slack in the line to get back in touch with my T-rig… finally, I felt something on the rod and I set the hook….  fortunately, it was a good set.   A monster rose up out of the water and danced on its tail.   I quickly threw my rod tip back down in the water, trying to hold a tight line on it.  I don’t know how many times this fish jumped… I don’t know how many times I worked it toward the boat…  at one point, the Boss was standing beside me with the net, waiting to see the fish up close…  it came up but was gone as soon as the Boss put the net in the water….  we were both standing there staring down at the water… my rod was bent double back under the boat….   Then the fish jumped again on the other side of the boat…   The Boss jerked the trolling motor up and I worked the line around the front of the boat to get on the same side with the fish.. but it had gone to the back of the boat….  That fish did some dancing, I couldn’t keep it down….  I was sure glad the drag was set right.. it would come to the boat, then rip off a bunch of line…  Finally, I worked it up close and the Boss was on it with the net like a dog on a bone….   WHAT FUN! 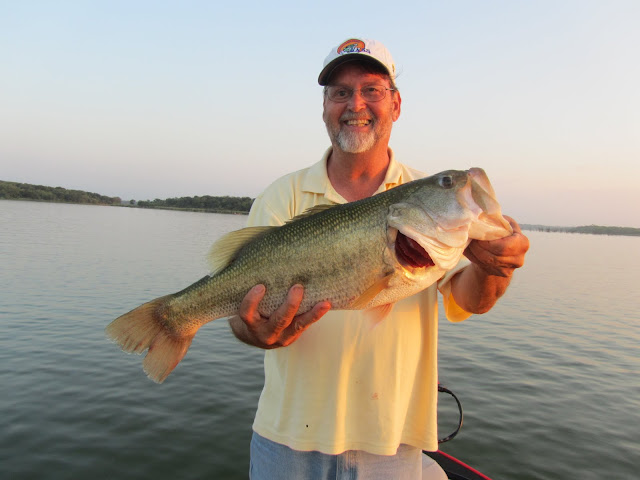 How do you like that lucky hat…   I decided to change up today so I could try and change my luck.  The hat trick does it every time.

I want you to know that I had started out with my shirt tail in my britches….  but that didn’t last long with this baby… It literally worked my pants off!  It weighed 7 pounds and 9 ounces.  It was about 23 1/4 to 23 1/2 inches long and had a 16 inch girth…    The color was fantastic!

All these weeks of going…   some days thinking “Why do I do this?”   Well, it only takes one like this one to remove any doubts about why we are on the lake so much.   This makes it all worth while.

The Boss got two bites in the same area, also on T-rigs.   One dropped it and the line broke at the hook when she set the hook on another…..  There are lots of days when you only get a bite or two…  a person is just really lucky when one like mine today hooks up.   At 7 a.m. our day of “catching” was over.

By 9 a.m. it was hotter than a pistol.  We had moved on to check out a couple of more spots, but with no luck.  We did note that the white bass / sandies are still breaking on the surface.   But they are not staying up at any one spot more than a few seconds….  Never enough time to move the boat.  They have to be right next to you if you are going to catch any on the surface.

Well…. that’s the story for today…  a tough day of fishing… just 4 bites…  and one 7 1/2 pounder in the boat….  I will take that most any time after the days we have had this year!

We did hear Randy Routh of Team Redneck guides on Bryan Hughes Texas Fishing show this morning on the way down to the lake….  The Boss laughed out loud when Randy told Bryan that he had moved over from Whitney to Aquilla this week….   Actually, we know that story pretty well.

Anyway…. today was one of the diamonds!