The weather was great.  It was about 79° or 80° and cloudy.  There was a light breeze blowing when we got there, but it settled down to nearly calm and stayed that way until we left around 11 a.m.   The water clarity remains good, visibility about a foot or two on a cloudy day.  The lake level today was 531.56 about a foot and a half low.   The lake is falling, but it is a slow fall, very stable relatively speaking.

There were one or two heron working the bank, but the birds are scarce.  The birds are generally our fish finders.  This year we have been hard pressed to find any concentration of birds or fish… very few to be blunt about it.

We worked the Cedron Creek area over pretty good again this morning.  The large flat where we found some signs of small (fingerlings) white bass schooling was not as active this morning.  We did a lot of trolling around and inspecting areas with the fish finder today…  We marked very few fish other than in the deeper creek channels.

The Boss picked up one fair sized white (larger than those we have caught on Aquilla recently) on a crank bait. 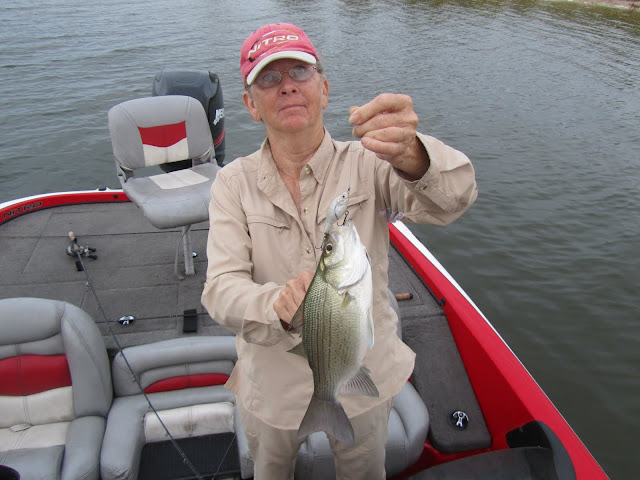 I think the fish was lost or sick.   There certainly were no more around… none that bit anyway.

Then she picked up a small bass.  That’s a 5 inch worm and she is giving the fish the old eye ball measure… looked like about a 10 incher to me. 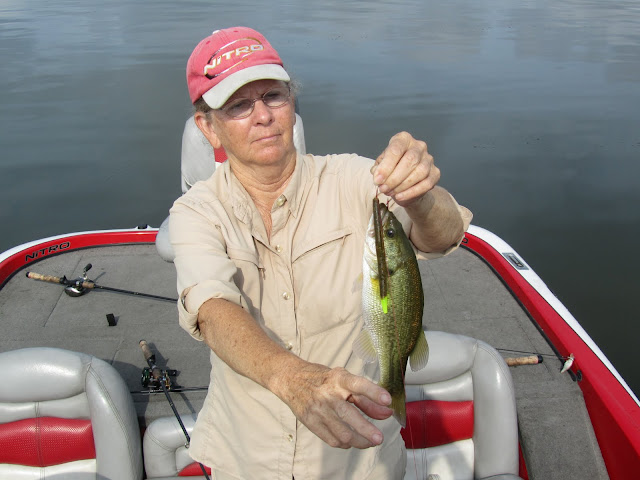 I told her she should have stuck with the new hat.  I think it would have brought her better luck.  And, it is much redder anyway.  I think she mumbled something about me minding my own bidness…..

I didn’t get a bite all day that I know of.  Worked a lot of grass and had a worm disappear on me, but I couldn’t blame a fish bite for the worm going south.

We fished the creek channels, the shallow points, stumpy flats and the rip-rap at the bridge.   We fished with crank baits, top water, spoons, T-rigs and C-rigs.  Just did not find any fish.   It should have been a great day with the clouds and low winds….  but, its 2012 and Whitney….  one for the record books this year.   Actually, it feels like it did back when we first started fishing Whitney and didn’t have a clue about finding fish on Whitney… We must have went for 3 or 5 years without catching many bass.  But, hey back then we could catch limits of big whites and stripers….  I would be really happy to have those days back!

Even the deer were sparse today.  We only saw this one grazing by its lonesome up in Cedron Creek Park. 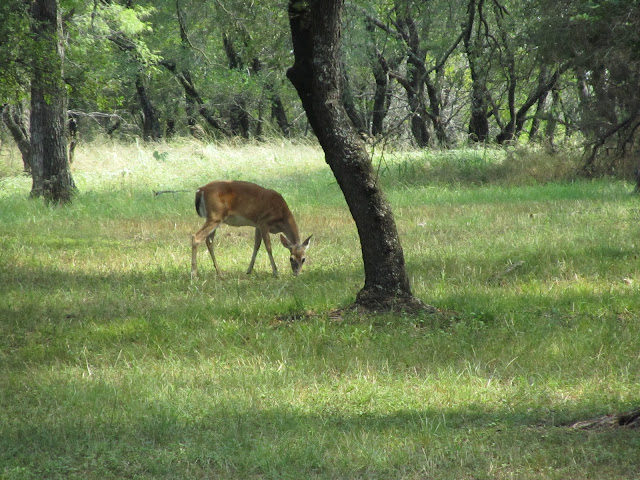 You know, fishing seems to me to be a lot like life.  You never know what is going to happen.  Most of the time, the fishing is routine.  You have some good days and some bad days… usually a lot more good days than bad.  But, no matter how bad it gets you just have to keep on going, keep on working and have faith that the good days will come back in big numbers.   You just have to have faith!