Well, we decided to check out Whitney again this morning… One day soon, it will have to start to return to normal.

We were up at 5 a.m. and made the lake by 6:30 a.m. Wind, what there was of it, was from the northeast, very light when we launched. The air temperature was great, somewhere in the low 70’s. The water temperature was still high 85 to 86 degrees all morning. The lake level is 529.72 or about 3 feet 3 inches low. The ramps are still in great shape or should be. The water is relatively clear, but I think a thermocline exists at about 20 feet…. at least something shows up there on my graph and there don’t appear to be many fish below it. It was one of those “un-cloudy days” as Willie would say… not a cloud anywhere all morning.

We fished a number of our favorite spots… nothing. We fished deep (15 feet) , we fished shallow (1 foot of water and less) and points in between. We fished rocky points, ledges, humps, and flats, both shallow and deep. We fished rocks and we fished the dead stickups. We fished top water, crank baits, t-rigs and c-rigs. We did not get one bite.

I think Whitney will come back, I just don’t know when. In the mean time, for us it fishes like the dead sea. This old buzzard was watching over it like it was the Dead Sea today. It was just about all the wild life we saw. 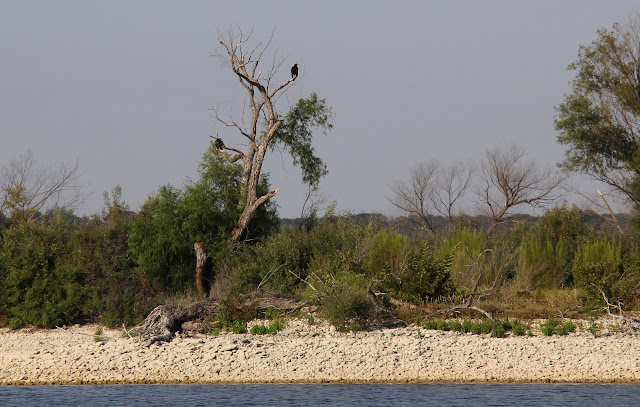 We launched at Cedron Creek Park.   There were very few campers in the east end of the park and only a relatively few more on the west end.   Just a casual look from the lake said that McCown Valley Park was also relatively empty.   When we launched, there were no other rigs on the ramp and there were no others there when we returned at 10 a.m.

On the lake, we might have seen a half dozen boats.  That’s a very light weekend for Whitney.  Even the pleasure boats were few and far between.  At 9 a.m. sharp, a couple of jet ski’s did come out, but the lake traffic was no where near what it was last summer, even when the lake was down.

It was nice out there though, temperature was great, it was only 83° when we left the lake at 10 a.m.

We could have gone to Aquilla and maybe picked up some fish, but we wanted to give Whitney a shot and to get a look for ourselves at what the lake is like.   We did see a couple of other bass boats, but we have no idea whether they were catching or not.  And, with no one else using the ramp, there was no one there to tell us any lies either.  But, we only fished the mid lake area….  maybe the fish were biting up the river or down near the dam…  don’t know.

Anyway, looks like our next trip will be to Aquilla…  we will be trying to get some bass in the boat, the freezer is dang near empty of  fish.